Dolphins have a worldwide distribution, as they inhabit all the oceans and seas of the world except the Caspian Sea and the Aral Sea. Most species are concentrated in temperate and tropical areas although they dwell from the equator to the subpolar regions.

Obviously, the distribution and habitat are different for each dolphin species, but usually, they avoid extreme cold waters, so they are not found in the polar zones.

Dolphins are found living in bodies of water around the world. They inhabit all of the oceans and some important rivers. Most of them live in saltwater, but a few species thrive in freshwater.

The habitat of dolphins varies according to environmental factors and food accessibility. They are smart creatures with the intelligence to modify their habitat when needed for survival.

For example, the Bottlenose Dolphin dwells in all of the oceans, and they tend to live close to the coastline. Migration is a big part of life for some dolphins. They have to move where there is enough food; This is why some locations where there used to be dolphins either have very few or none anymore. Even changes in water temperatures can be reasons for them no longer to return to locations they once called home. Some successfully migrate hundreds of miles annually.

The Atlantic, Pacific and Indian Oceans and their seas host a large number of dolphin species since they prefer tropical, subtropical and warm waters. However, talking about the particular distribution of dolphins means addressing the place where each species live as they differ from each other.

Also, some species are distributed over large areas while others may inhabit a small region. Other species are particularly endemic to a zone, and some may have different populations scattered over an extensive range. Each species is a different case. 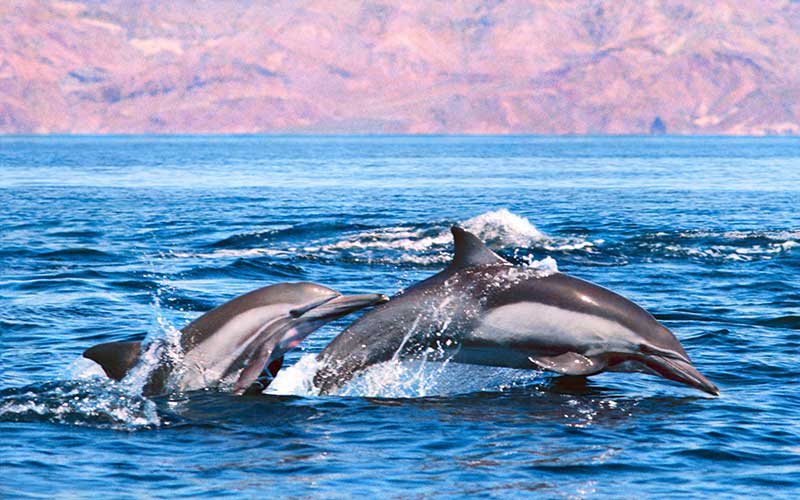 Two common dolphins jumping in the Sea of Cortes, Mexico.

The Pacific Ocean is habitat to several species, such as the bottlenose dolphin (Tursiops truncatus), perhaps the best-known dolphin, with a vast territory ranging from Japan to Australia and from the southern United States to Chile and Hawaii. In the Atlantic, the bottlenose dolphin dwells from North America to southern Argentina in the western part of this ocean and from Norway all the way down to the coasts of South Africa in the east. This species is also common in the Mediterranean Sea and the Indian Ocean.

Some dolphins out there live in much smaller habitats. For example, the Yangtze River Dolphin only dwells in the river of the same name. Hector’s Dolphins inhabit the coastal areas of New Zealand. They tend to be scattered there around the South Island.

The Short-beaked Common Dolphin (Delphinus Delphis) mainly inhabits the Mediterranean Sea and the northern part of the Atlantic Ocean. The Chinese white dolphin (Sousa chinensis) only dwells in the waters of the Indian and Pacific oceans.

The habitats of dolphins are also very diverse. They can be found in ports, bays, gulfs and estuaries and frequently in the shallow waters of the continental shelves. Previously it was believed that dolphins could not dive more than 200 meters deep, but apparently, some species have the feasibility of diving about 300 meters deep, a conclusion reached by finding remains of benthic fish in the stomachs of some specimens.

Some individuals prefer living in the open ocean while others fancy the conditions near the coasts. The Hector’s dolphin (Cephalorhynchus hectori), for example, can live only in shallow waters near the coastline. In contrast, the Spinner dolphin (Stenella longirostris) lives in the pelagic zone of high seas.

Open ocean dolphins seem to tolerate cold temperatures better than the coastal species. They rarely get close to the coasts. In contrast, coastal dolphins prefer warm and tropical waters, and their small body allows them to enter narrow and shallow places such as estuaries and river channels.

One thing is for sure: Dolphins visit areas with abundant prey within their habitats. Whether or not it is shallow water, most of these cetaceans prefer the pelagic area of ​​the sea where is easier finding and catching food. If the food supply decreases, dolphins tend to migrate to areas where there is no shortage, so their eating habits also change.

Since most species do not tolerate frozen waters they can migrate in search of warmer places during the seasons when temperatures drop, and vice versa. Dolphins also consider the migration patterns of their usual prey and their breeding habits to move from one site to another and perform seasonal migrations.

River Dolphins, for their part, inhabit the river basins of their distribution areas, along with the banks of the main channels and smaller channels. Some river dolphins venture to explore the forests when the rainy season floods them.

If you want to know the distribution and habitat of a particular species, do not hesitate to visit the Species section.