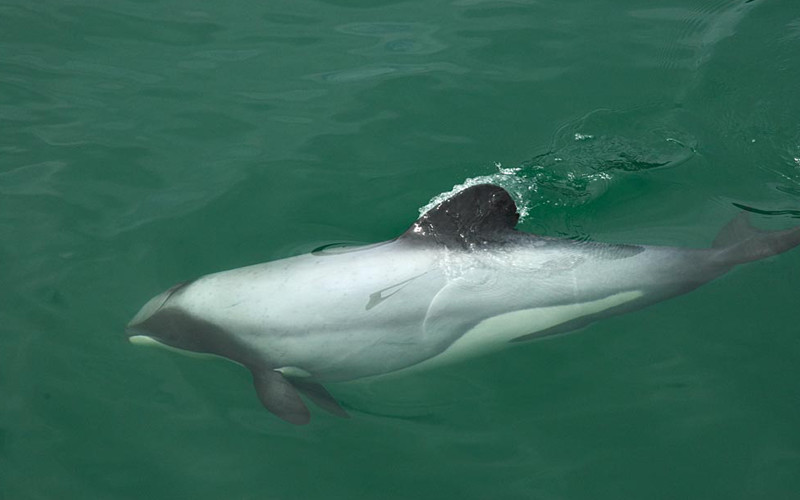 Hector’s dolphin is one of the smallest toothed cetaceans in the world and is endemic to New Zealand. This dolphin got its name in honor of Sir James Hector, a Scottish scientist who described this dolphin for the first time in the decade of 1870’s.

This dolphin varies in size depending on its geographic location. Its subspecies, the Maui Dolphin, is slightly larger.

Weight and size.
The species presents sexual dimorphism since females are bigger than males. The average length of an adult can be in the range of 1.2-1.6 meters. The weight oscillates around 40 and 60 kilograms.

Morphology.
It exhibits a short and robust torpedo-shaped body that becomes narrower towards the caudal fin. It has large flat pectoral flippers and a rounded dorsal fin. Its snout is short and does not have a long beak. There is no set number of teeth but these, conical and with a diameter of 3 millimeters, can form a set of 31 pairs in the upper and lower jaw.

Skin Coloration.
The dorsum and sides have a light gray color with a dark stripe along the upper area from the dorsal fin to the caudal fin. The former and the pectoral flippers, as well as the tail, are black and from the snout, a dark band extends passing through the eyes to the beginning of the flippers. The lower region of the snout and belly are whitish.

Distinctive characteristics.
Hector’s dolphins are easily recognized, it just takes observing if the animal has rounded and dark fins, as well as a semilunar spot between the eyes and the blowhole. And of course, you should notice a small body size.

The Hector’s dolphin only inhabits around the South Island of New Zealand and a small region of the North Island. Its distribution is the most limited of all extant cetaceans. For habitat, it prefers shallow coastal waters with depths less than 100 meters. It lives about 7 kilometers off the coasts and can reach estuaries, river mouths, and shallow bays.

There is a belief that these dolphins are generalists in their diet and they select prey species based on their size. Their prey is almost always small fish and squid, including yellow-eye mullet (Aldrichetta forsteri), Kahawai (Arripis trutta), arrow squid (Nototodarus sp.), Ahuru fish (Auchenoceros punctatus), Red cod (Pseudophycis bachus) and Yellowtail horse mackerel (Trachurus novaezelandiae).

During the spring and summer months, these cetaceans remain close to the coasts, perhaps because it is the time when their prey flock there to spawn and when the eggs hatch.

To hunt, these dolphins use their sense of echolocation in murky and shallow waters. They submerge for about 90 seconds, trap the prey and consume it. In the east of the South Island, they have more variety of food, because in this area 80 percent of their diet is composed of 8 species, while in the west 80 percent is made up of only four species.

The reproduction rate of Hector’s dolphin is extremely low: barely 2 percent per year. They breed 2-4 times a year, and females can only have up to 7 offspring throughout its life. Males reach sexual maturity at 5-9 years and females at 7-9 years of age. Both are polygamous.

Their sexual behavior lacks any aggression. On the contrary, males only search for receptive females, and when they do, court them by performing jumps, executing chases, showing the belly and establishing physical contact. These demonstrations are more frequent in groups that have more members.

Mating mostly occurs in the summer. After a gestation period of ten to twelve months, the female gives birth to a calf that starts to be independent as long as it is two years old.

This little cetacean form small groups composed of 2 to 10 individuals but sometimes these “mini pods” associate with other groups to form large temporal pods. Also, both genders have the freedom to move to other groups.

This dolphin is capable of manifesting its mood through actions and postures of the body. For example, if happy or annoyed it shakes the flukes of the caudal fin if excited it jumps out of the water, and if it bites, splashes water or forms bubbles, it is showing aggression.

It is a slow swimmer compared to other species of dolphins. They usually stay close to the coast, especially during the summer. In winter it moves away from the coast, and in the spring it migrates to other regions or returns to the coasts where it was the previous summer.

It is a highly threatened animal. Current estimates indicate that only about 7,400 individuals remain. It has a status of “Endangered” In the Red List of the International Union for the Conservation of Nature (IUCN), that is, in danger of extinction. The main causes of this are:

– Bycatch with gillnets.
– Collisions with boats.
– Contamination of their habitat with chemicals produced by humans that accumulate in the body of the dolphin and causes health problems and decreases fertility rates.
– Loss of habitat as a result of coastal development.
– Disturbance originated by boats that transport tourists. In this case, the impact is still under review.

In 1988, New Zealand created a marine mammal sanctuary with the aim of protecting them under the Marine Mammal Protection Act. Although dolphin deaths reduced since this, it is still not enough to recover their populations. Since 2008, the Ministry of Fisheries and the Department of Conservation in New Zealand have planned to improve conservation measures, as yet unresolved.