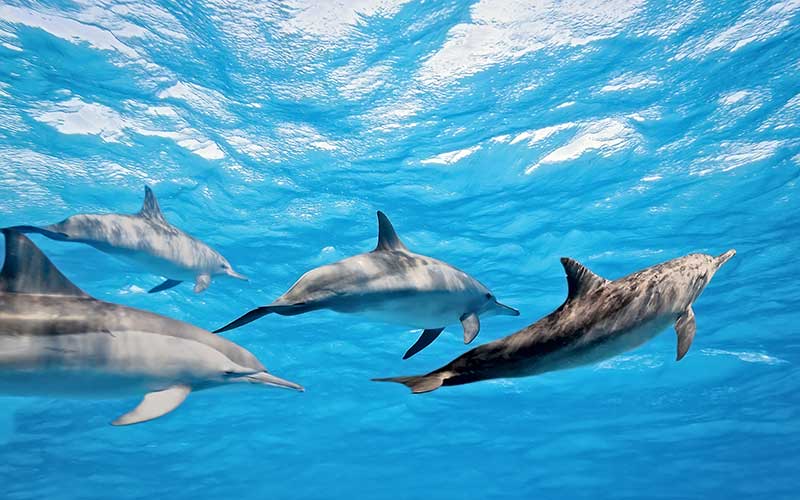 If you have had the opportunity to see a dolphin that performs incredible spins in the air and very energetic jumps in the ocean, perhaps it was a spinner dolphin, because no other species beats them in this area.

Morphology.
It is a dolphin with a slim and elongated body with a very hydrodynamic form. Its snout is also thin. The head has a narrow shape even at the top of the melon. The pectoral flippers are small, but they feature a curved and triangular dorsal fin which slightly resembles the shape of a sickle. Some individuals have this fin very hunched forward.

Weight and size.
The spinner dolphin measures between 1.29 and 2.35 meters in length and its weight range between 23 and 79 kilograms. As a rule of thumb, the females does not exceed 2 meters in length, but the males reach larger dimensions than the former.

Skin Coloration.
This dolphin has three colors. The skin on the dorsal area has a gray color down to the sides where it has a sharp change in color to a lighter gray tone. The lower part of the body is much clearer and almost white or pinkish. The dorsal section has small white spots while the lips and flippers are dark.

Distinctive characteristics.
The coloring pattern and the very long beak are the main features of this species.

Stenella longirostris inhabits the tropical, subtropical and temperate areas of the Pacific Ocean, the Indian Ocean, and the Atlantic Ocean. Its range of distribution is between the latitudes 40° north and 40° south.

The distribution area of the species exceeds 20,000 square kilometers. It is considered a pelagic dolphin that lives in the high sea on the continental shelf.

The spinner dolphin it is a carnivorous animal that consumes mesopelagic small fishes that measure around 20 centimeters in length. They also include Cephalopods and some crustaceans. The diet of this dolphin includes:
– Lanternfish (myctophids).
– Apogonidae family.
– Prawn.
– Eel.
– Squid.

It searches for food more often at night. It submerges down to 250-1,000 meters or ascends to the superior column of water following the migration of some of its prey.

The energy that shows in its games and acrobatics got this species the name of “spinner dolphin.” It has a great ability to jump up to 3 meters height and turn seven times on its axis before plunging again and then repeat the exercise about 13 times more before resting.

However, scientists have several theories to explain this peculiar behavior:
A) It is useful to get rid of parasites or remoras.
B) The sounds produced when the dolphin dives communicate their location to other individuals.
C) It is just a game.

It organizes in pods of 50-200 members, but sometimes they gather with other groups creating superpods with thousands of individuals. They associate with pantropical spotted dolphins and with yellowfin tuna. During the night it moves to the surface to hunt, and during the day it rests most of the time. Its jumps and acrobatics are frequent when the sun goes down.

Besides echolocation, it uses the sense of touch to communicate with the other members of its pod. If the group is in a closed area, the dominant males may manifest aggressiveness by abruptly hitting the flippers of others.

This polygamous species reaches sexual maturity at different ages according to gender. The females mature between 5.5 and ten years, and the males can begin to reproduce between 10 and 12 years of age. Females can give birth to one single offspring every 2 or 3 years.

The process of courtship consists on gentle touches between a male and a female after chasing her when the male detects receptivity of one of them. This process occurs 1 to 2 times a year, but they can mate during any month. After the courtship, the male copulates with the female.

The gestation period last 9-11 months. The calf is born with the tail forward, and the mother breastfeeds it until it is 1 or 2 years old.

The Red List of the International Union for the Conservation of Nature does not have enough data to classify the spinner dolphin according to its state of conservation. The fact is that the species has been the subject of numerous threats that endanger its life in the wild:

– Bycatch with gillnets in Sri Lanka, Taiwan, northern Australia, the Philippines and the Solomon Islands.
– Incidental catch as a consequence of the association of this dolphin with the yellowfin tuna. The fishermen follow the dolphin’s trail to catch the tuna, and during the process, the cetacean can be disturbed, injured or dead.
– The intentional catch for human consumption.
– Excessive noise pollution.
– Entanglement in fishing debris and garbage in the water.
– Habitat Pollution.

Some countries have taken action on this issue. In Hawaii, for example, the Office of Protected Resources of NOAA fisheries, intends to implement rules that protect the dolphin in their waters. The International Dolphin Conservation Program (CIAT) has published rules to release captured dolphins. For its part, CITES has included the spinner dolphin in its Appendix II, made up of species that its commercial exploitation needs regulation.