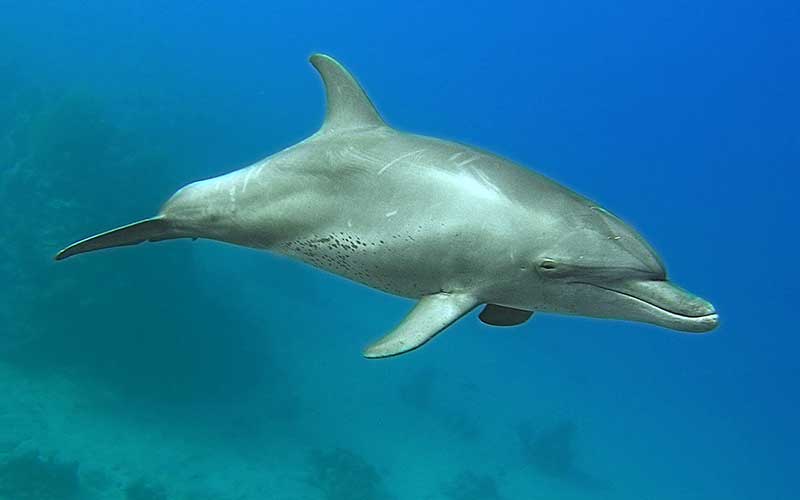 The initial presence of dolphins on the Earth dates back millions of years. It is hard to believe, but scientists think that the earliest ancestors of dolphins were not marine creatures. They were terrestrial animals that today seem to have little in common with dolphins.

The fossil records indicate that the origin of all members of the modern order Cetacea is the order Artiodactyla, a group whose members are terrestrial mammals being their closest living relatives those belonging to the family Hippopotamidae (Hippopotamuses). Artiodactyls have two fused fingers, and the tip of their legs are called hooves.

Many signs prove that dolphins have terrestrial origins. They need to come to the surface of the water to get air is one factor. Their bones strongly resemble the limbs of many animals that live on land. Dolphins have spines that move vertically, and this is a characteristic mainly found in animals that can run on land. When you look at the movements of fish, their spines move horizontally.

The process of evolution can be very slow, and it allows living creatures to develop an anatomy that is structured to thrive in their environment.

The size and the shape of the skull have changed over time too. It has become larger which is an indication that the development of the fat pad in the lower jaw emerged. It extends to the middle ear, and this helps dolphins to be able to hear as well as to use the process of echolocation.

What is interesting though is that unlike many other mammals, they didn’t change to being herbivores. Instead, they continued to be carnivorous in the water as they would have been on land.

The nostrils later evolved into blowholes, so they spend less energy when reaching the surface of the water to breathe. The movement of the ears closer to the eyes is also part of the evolution process. Those changes over time helped them survive in the water.

The body of actual dolphins does show two small pelvic bones that are rod shaped. These limbs aren’t on the outside, but they are vestigial legs.

The most direct link of the first cetaceans in the line of the artiodactyls is with the extinct taxonomic family Raoellidae, whose members lived during the early and middle Eocene in China, Pakistan, India, and Mongolia. They were hoofed mammals looking for their food walking near bodies of water.

Scientists believe that the oldest ancestors of dolphins were land animals and not aquatic.

In 1983 the fossil of an animal that the scientists named Pakicetus was discovered in Pakistan. The bones were of an elementally terrestrial mammal believed to have been an archaic cetacean because although it could remain on land, it also ventured into shallow waters. The pakicetidae family, these first cetaceans, appeared about 50 million years ago during the Eocene.

They had four legs and hooves such as camels and horses. We know now that the bone structure of the flippers of dolphins is similar to that of the extremities of mammals, with five phalanges and joints. Thus, the family pakicetidae was a transition link between the exclusively terrestrial mammals and the aquatic as they started to spend more and more time in the water.

Another theory suggests that modern cetaceans have their origin in mesonychids (Mesonychid family), a group of carnivorous ungulate mammals with teeth similar to whales and also related to artiodactyls that lived 55 million years ago and began to inhabit shallow water regions due to shortages of food supplies on land and climate changes.

After that, the following 15 million years the archaic cetaceans continued developing evolutionary modifications to adapt to life at sea. They still had paws and depended on the land to raise their offspring, but they were looking for their food in the ocean. The family of the Archaeoceti (Family Archaeoceti) to which the Pakicetus belonged, evolved from the Mesonickids and lasted until the Eocene-Oligocene, becoming increasingly aquatic members.

In the late Eocene, 38-45 million years ago, basilosaurids (Basilosauridae Family) appeared and lived, fully aquatic archaeocytes whose limbs were more elongated resembling the flippers. The base of their skull enlarged as it happens with modern whales and their hind legs were already atrophied; Possibly only used during mating.

Cetaceans with beards (Mysticeti) and toothed (Odontoceti) separated from a common ancestor about 35 million years ago. Since the early Miocene, the Odontoceti species developed echolocation as they have now.

Sometime about 12-15 million years ago, the first Dolphins of the Delphinidae family appeared. Among the first dolphins were Kentriodon and Hadrodelphis, belonging to the Kentriodontidae family and inhabitants of the ocean during the late Oligocene and Miocene.

Genetic studies show the current relationship of cetaceans to the Hippopotamidae family, which extends from the early Miocene.

12-15 million years ago, the first Dolphins of the Delphinidae family appeared.

Some dolphin ancestors are here below. However, they are cetaceans in general, and they are not specifically dolphins.

Simocetus rayi.
This species was present in the Oligocene, 30-34 million years ago in the northern Pacific Ocean. It had a length of 2 or 3 meters, and perhaps its head housed a small melon. Its snout was curved downward, and it had a blowhole positioned forward and lacked dental alveoli (divisions of alveolar bone) in the incisors. Its diet consisted mainly of mollusks and crustaceans.

Waipatia maerewhenua.
This species existed 24-26 million years ago in the southeast Pacific Ocean. It was about 3 meters long and resembled modern river dolphins because of its long snout and heterodont dentition (with multiple dental forms).

Zygophyseter varolai.
It inhabited the Earth during the Miocene 8.4-10.5 million years ago in what is now the Mediterranean Sea. Its length was between 6.5 and 7 meters and physically resembled a sperm whale although this cetacean had long teeth. Its feeding habits were comparable to those of the extant Orcas or killer whales (Orcinus orca).

Messapicetus.
A genus of odontocete cetaceans that lived 9-13 million years ago during the Miocene period. It measured between 3 and 5 meters in length, and its aspect was very similar to the present dolphins. Their cranial features indicate that they probably used echolocation and possessed a melon. They fed on fish and squid.