Although it is commonly named “killer whale,” environmentalist are trying to change this name because there are two inaccuracies in it: it is not a whale, and much less a killer. The Orca is a toothed cetacean member of the genus Delphinidae, so it is the largest dolphin in the world.

Although it is also a powerful predator that even attacks sharks, it is not a human killer. Attacks have occurred but only from specimens in captivity victims of stress and confusion.

Orcas are considered monotypic, that is, they belong to a single species although in recent years some scientists think that the smaller orcas of Antarctic waters are a subspecies. There are several ecotypes result of one of the largest distribution of all mammals, in fact, just after humans.

Morphology.
It is a huge and bulky cetacean that has a shape similar to the other dolphin species. It has a strong skeleton and the skin covered with collagen fibers. Both genders have a round head with a big forehead and pectoral flippers similar to paddles. Its dorsal fin is also large: in males can measure up to 1.8 meters while that of females reaches between 70 and 80 centimeters and is more curved. The caudal fin has two flukes and measures 1.8 meters wide.

It has 10 centimeters long teeth covered with enamel; those in the front can lean forward when the orca holds a prey. Orcas have excellent senses of sight, hearing and touch.

It is the largest mammal predator and feeds on a wide variety of large or small animals.

Skin Coloration.
An Orca is easily recognizable by its black and white color pattern. The dorsal area is black but changes to white from the lower jaw passing through all the ventral part up to the anus. Above the eyes, it has a white patch. Its flippers are also black, and it has a gray saddle patch in the dorsal area just behind the dorsal fin. Orcas show this coloration pattern after one year of age.

Distinctive features.
The color pattern is unique to each specimen. Also, the gray patch behind the dorsal fin called “saddle” got this name because of its apparent resemblance to such supportive structure. 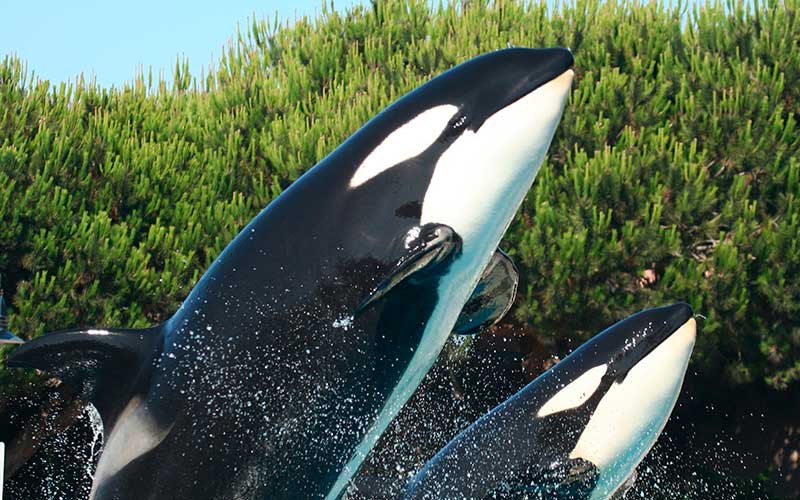 WHERE DO THEY LIVE? HABITAT AND DISTRIBUTION.

The orca distribution is incredibly broad, ranging from the polar waters to the equator in the open ocean or closed systems such as the Gulf of Mexico, the Gulf of California, the Persian Gulf, the Mediterranean Sea and the Red Sea. They are distributed in all the oceans of the world although they have a preference for cold regions. They live in waters with depths of 20 to 60 meters, and occasionally there are sightings along the coasts. After humans, killer whales are the most distributed mammals on the Earth.

Orcas can inhabit deep or shallow waters as well as visit bays, estuaries, and even rivers. They dwell in all kind of marine aquatic habitats.

It is the largest mammal predator and feeds on a wide variety of large or small species, warm-blooded or cold-blooded, whether dangerous or not. Orcas do not discriminate. A daily intake of 45 kilograms may include seals, sea lions, fishes, squids, turtles, birds (even penguins), sea otters and even animals considered as predators like sharks. Killer whales even prey on baleen whales or dolphins.

When orcas consume small prey, they swallow it completely, but they have to split the large ones into smaller pieces before ingesting them, which usually do it by shaking the victim violently. They have several hunting strategies depending on the type of prey and the region they inhabit. For example, in the North Pacific, they feed on some fish, seabirds, and sharks.

Cooperative hunting is a demonstration of their sociability and their intelligence. First, a group of orcas follow a prey and corner it. When the prey is exhausted, the orcas give the victims powerful blows with their tail before eating them. 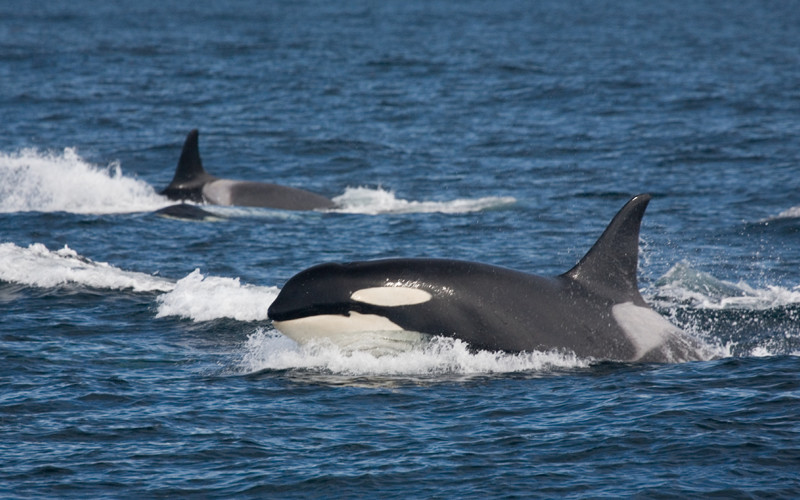 Orcas in the wild.

Killer whales have a polygamous reproduction system, and both genders mate with multiple individuals throughout their life. Females are sexually mature at an age ranging from 6 to ten years, and males between 10 and 13 years. Both can mate at any time of the year although in the northern hemisphere this occurs more frequently during October and March.

After a gestation period of 14-18 months, the mother gives birth to one calf; this happens one time every 3-8 years until the female turns 40 years old. A mother provides dedicated maternal care because the breeding depends entirely on her for feeding and protection. When the calf is 1 or 2 years old, it is weaned but continues in its native pod.

It is a sociable species with a complex social structure. They live, reproduce and feed in pods of up to 40 or 50 members forming temporal superpods with more members sometimes. In general, these pods have 20 percent of mature males, 20 percent of offspring and 60 percent of females and young males. Orcas always stay in the mother’s group.

In some cases, an elementary unit may consist of a mature female, her adult offspring and the offspring of her daughters. Sometimes, some pods have a small number of members but with no close links.

On the other hand, killer whales can communicate through various sounds that other orcas in the pod recognize even though they are several kilometers away. Jaw claps, pulsed calls, pops, and whistles, are part of their communication sounds as well as echolocation clicks.

State of conservation: Data deficient.
* But the population of some regions is in danger of extinction.

For centuries, orcas have frequently been hunted for oil and meat. Now, commercial fishing is not a significant hazard, but bycatch is. Also, they are very vulnerable to the contamination of their habitat as nocive chemicals can penetrate their skin and tissues; Consequently, this affects their reproductive and survival capabilities.

While there isn’t an assessment of the conservation status of the entire species, the population of some regions is in danger of extinction, such as that of British Columbia and Washington, in the United States. For this reason, CITES (Convention on International Trade in Endangered Species of Wild Fauna and Flora) has included the species in Appendix II of the species whose trade is controlled. The IUCN Red List does not have enough data to establish it in a category.

In 2008, NOAA (National Oceanic and Atmospheric Administration) through the National Marine Fisheries Service announced a Recovery Plan for Southern Resident Orcas to improve the living conditions of these cetaceans.