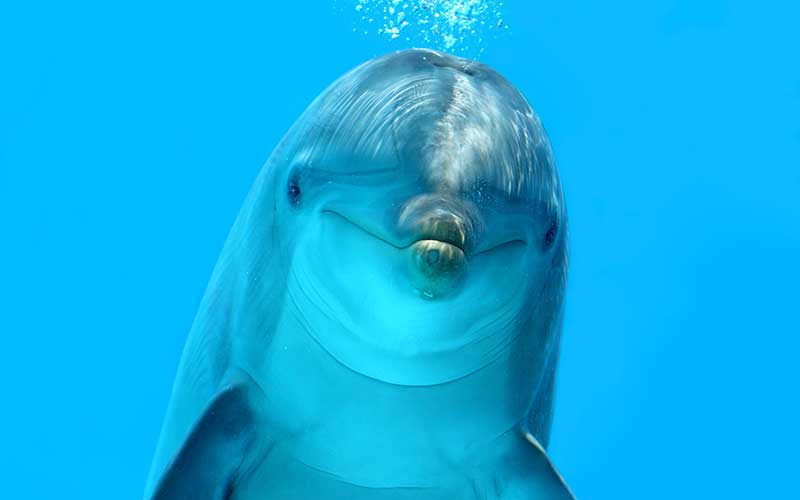 Echolocation is a process that permits dolphins to send out sound waves that when they hit an object, are bounced back, allowing them to identify the location, shape, and size of such object.

The first person to look at echolocation thoroughly and to document the findings was Jacque-Yves Cousteau. He wrote about it in a book published in 1953 called The Silent World.

Echolocation or biosonar is the ability of some animals to locate objects through sound waves, that is, sounds. Many animals, including odontocete cetaceans and some bats, make use of echolocation to orient themselves and detect prey.

The process of evolution of dolphins gave them this ability that allowed them to survive in the aquatic environment. In water, the sound waves travel 4.5 times faster than in the air, so echolocation is the perfect resource that facilitates their survival.

WHY DOLPHINS USE ECHOLOCATION?

Dolphins need echolocation to navigate, locate prey, hunt, protect themselves from predators in murky waters or where there is no sunlight and to communicate. In fact, in deep dark waters, their sense of sight is almost nil, but they do not need it because they can detect and chase fast prey through the emission of sounds.

Most odontocete cetaceans can emit very high-frequency sounds. In this sense, the frequencies vary according to the species, but there are general characteristics in all dolphins. For example, they always communicate with low-frequency signals, which include whistling or chirping; But they emit high frequencies when using echolocation. The sounds vary according to the circumstances and the purpose.

HOW DO ECHOLOCATION WORKS?

First, is necessary to know that dolphins are devoid of vocal cords, so they do not have a “voice” like that of humans. Instead, they generate sounds through other internal structures.

Dolphins produce sounds from the nasal air sacs, the blowhole, the larynx, the lungs, and the melon; This latter is an organ located in the upper inner area of ​​the head filled with low-density lipids.

For echolocation, dolphins emit ultrasounds called “clicks” by pushing air between the phonic lips of the nasal passages. When these lips open and close, the surrounding tissues vibrate and produce sound waves.

The passage of air through the respiratory cavities generates the sounds.

The Dolphins have an organ in the head, called melon, that allows the transmission of the sound waves.

The melon concentrates the pulsations that the dolphin emits and sends them forward. The primary “function” of this organ is to group sounds into beams and produce and amplify the resonance.

Once the emission is released forward, the sound waves bounce back in the objects that are in the water.

A part of the signal bounces back in the objects and returns as an echo to the dolphin. Their brain receives the sound waves in the form of nerve impulses, and the dolphin can interpret this echo.

The receiver of the returning sound waves is in the lower jaw, and the teeth of dolphins work like antennas to receive the signals. It is a very complex adaptation vital for their survival.

The intensity, pitch, and time that it takes the echo to return to the dolphin provide information about the target, such as its size, shape, composition, position, distance, and direction. Based on this, the dolphin builds an image of its environment and the object.

Echolocation has been studied in bottlenose dolphins (Tursiops truncatus), although there are still underlying aspects that are not entirely understood. For now, scientists see echolocation as a learning opportunity to create new communication technologies in some areas of human life.

What is known is that dolphins have the ability through echolocation to emit sounds with a frequency of 120 kHz and humans, with excellent hearing, can hear sounds with frequencies ranging from 20 Hz to 20 kHz. Even dogs and cats that have amazing hearing capabilities do not compare to dolphins. Dogs hear up to 45 kHz, and cats up to 65 kHz.

However, high-frequency sounds don’t travel very far in the water while Low-frequency sounds have more energy and can reach greater distances. Most of the time, dolphins will get the best results with echolocation when the object is from 16 to 656 feet from them.

Excessive noise in the environment should be upsetting for dolphins and can cause them to lose their hearing over time. It can also disorient them and disrupt their navigation systems.