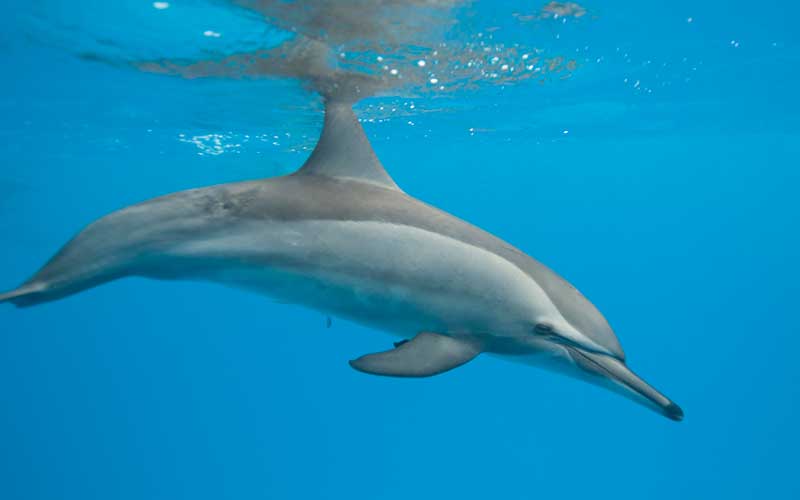 Dolphins are active predators that have a carnivorous diet. Their eating habits are flexible so that they can adapt perfectly to the habitat where they live.

Although they have small teeth, they do not use them to chew the food but only to hold the prey. What they do is, once the prey is in their control firmly hold by those teeth, they swallow it whole starting with the head. If the prey is a large animal, then they tear it by shaking or crushing their body so that it breaks into smaller pieces.

The stomach of these cetaceans has several compartments that make digestion a quick process. The daily total food intake varies according to the species, but they do not feed abundantly. For example, a bottlenose dolphin (Tursiops truncatus) consumes between 4 and 5 percent of its weight per day.

Dolphins spend plenty of time finding food every day, and some species can consume up to 30 pounds of fish per day as adults. They migrate and move long distances to find food, although if they have enough supply where they reside, and the temperature of the water is also acceptable, they probably won’t migrate.

Dolphins do not use their teeth to chew the food but only to hold the prey.

They consume a variety of bony fish, crustaceans, and cephalopods. Individuals living near the coast regularly feed on fish and benthic invertebrates, while those who stay in high seas prefer to eat squid and fish as well.

Orcas (Orcinus orca) are a separate case because their diet includes more than small fish. They are used to hunt other marine mammals such as walruses, sea lions, and seals, as well as penguins, sea birds, and even small baleen whales.

Some reports indicate that deep-sea fish remains have been found in the stomach of some dolphins, pointing out that they may be able to dive up to 500 meters deep to search for food.

Dolphins use various strategies to catch their food, but they are usually related to group hunting:

When a pod of these cetaceans locates a school of fish large enough, they start to surround their prey to reduce the area of ​​dispersion. Imagine a compact group of thousands of fish going from side to side to avoid a set of predators. When the prey is already disoriented, the dolphins take turns entering the fish school from below and begin feeding themselves. Some others stay on the outer perimeter to avoid the fish to disperse.

Herding is one of the most common methods of feeding that they use; This involves a pod working as a unit to get a school of fish to curl up into a tight ball. Then, they take turns to rush through and plow the center of that ball, eating all they can in the process.

Other times, a pod goes to the coasts or the sandbanks to facilitate their task as these areas offer a great variety of fish and it is easier to catch them. Dolphins sometimes corral fish in shallow waters so they cannot escape.

Dolphins learned to feed following fishing vessels. Bottlenose dolphins are the species that practices this more often, and it involves following trawl nets to feed on discarded fish and or those thrown back into the water by the fishers.

They do not always hunt in groups. If necessary, dolphins also look for food individually. Orcas and other species herd their prey to the coasts or places where they will not escape and sometimes wait patiently until the victim makes a mistake and can catch them. There are some videos of orcas practically getting half of their body on the sand to the catch seals that feel safe in the seashore, in a move that has to be perfectly coordinated with the ocean waves.

Sometimes dolphins beat the prey with their tails until they come out of the water and they catch them in the air with their mouths.

Recently a particular behavior was discovered in bottlenose dolphins that inhabit the west of Australia: when looking for food in rocky areas, females protect their snout using a marine sponge; Just when they intend to swallow the prey they release the sponge and eat. This unusual but sophisticated behavior is exclusive to females and their offspring.

The concept of cooperative feeding involves driving the schools of fish to the shallow areas of the water. Sometimes, this is to the coast, or it could be to some natural barrier or even a subgroup of the dolphins making such function. Other species drive prey into muddy banks so that they can simply catch them.

There are certain species of dolphins that use their flukes to stun their prey hitting them, and while the victims are still disoriented, they will feed on them.

What is fascinating too is that in some locations the dolphins have learned to help the fishermen drive the fish into their nets. The payoff for dolphins is that they get to feed on the leftover fish that get out of the nets.

Large pods use circular cooperative feeding. They divide into subgroups and then form circles surrounding schools of fish this way and continue to reduce the overall size of that circle before they take part in consuming them.

Something very similar is the crossing cooperative feeding; This involves dolphins moving in a cross pattern with groups of them swimming in different directions, allowing the fish to be in the middle of the routes that dolphins have created. Such strategy is usually a good one to use around rocky shores and in shallow areas of small bays.

Dolphins are intelligent, so they have the option to create different methods that fit their feeding needs. They have been seen mixing two or more of the mentioned feeding strategies into one session to get results. The ability to create such variations with ease and to build new formations is fascinating. The level of cooperation it takes among the dolphins in the pod is also noted.

When meeting dolphins, either in aquariums or in areas that these cetaceans visit, humans can provide them with food, but this action is not good for them.

Researchers point out that the fact that dolphins get quickly accustomed to being fed causing them to lose their natural hunting ability. If you visit an area with ​​dolphins, do not feed them!