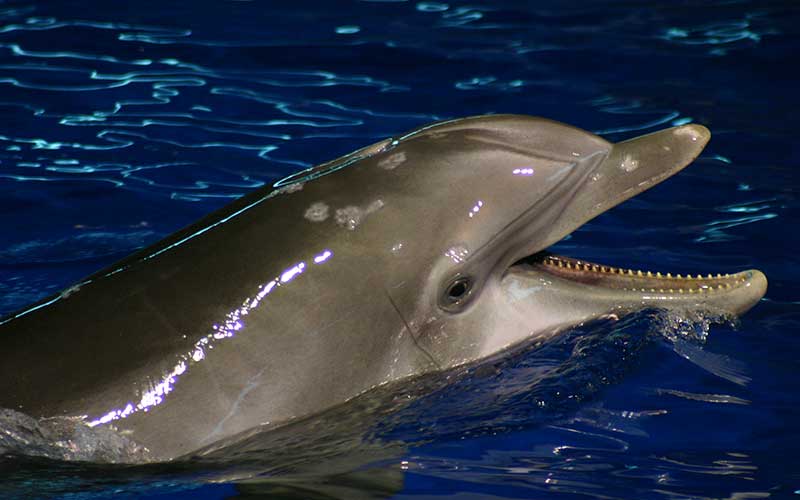 The overall anatomy of the dolphin is designed to survive in the water. All dolphins have similar anatomical and morphological characteristics; this means that all species have some features that do not differ widely between species.

Obviously, there are differences in skin color, shape, size and weight but it is relatively easy to recognize that a particular animal observed is a dolphin. However, it is common to confuse porpoises with dolphins, and this is because their external appearance is very similar and both are cetaceans closely related. The difference is that porpoises are smaller animals and have rounder snouts than dolphins.

Their size can range from one extreme to the next. Some of the smaller ones are about 4 feet in length, and others measure as long as 30 feet. Some of them weigh about 90 pounds while others tip the scale around 11 tons.

The coloring of dolphins is mainly grayish blue, brownish or black and white. They have a very sensitive skin, which can get easily harmed if hit by rough surfaces. However, they can recover pretty fast from severe injuries, including shark bites because they have a rapid healing process even for deep wounds.

Their skin feels like rubber, and they don’t have any sweat glands. Part of this though could be due to the thickness of the skin of a dolphin. The epidermis, which is the outer layer of skin, is from 10 to 20 times thicker than that of other terrestrial mammals. The skin will peel and flake off for new skin cells to replace the older ones. 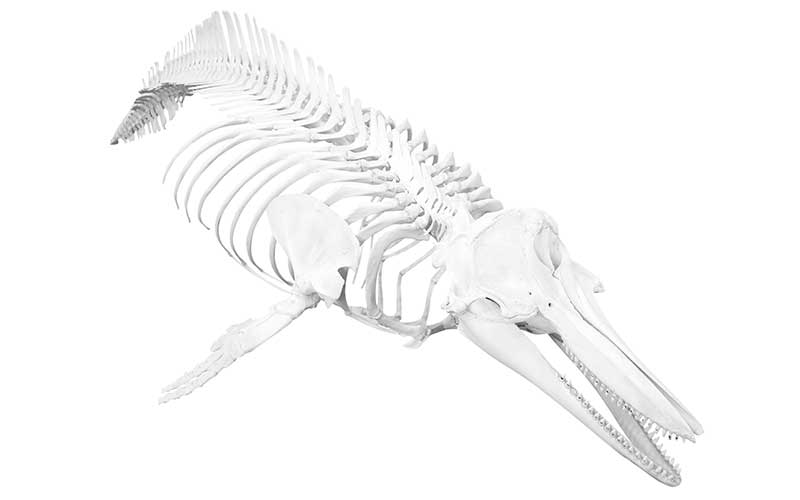 The bone structure of a dolphin.

Dolphins have a streamlined body designed to swim very fast, even for extended periods of time. The tail of a dolphin has two parts called flukes, and they use them to propel their body through the water, using their pectoral flippers to swim in a given direction.

Dolphins have a blowhole at the top of their head, and they must come to the surface for air. Some of them need to breathe several times a minute, and some species only have to get air twice per hour. They also have a large brain, the second largest for mammals in comparison to their body size, only after humans. Their brain is very complex, and research shows it to be more advanced than that of other animals.

Dolphins vary in weight and size. There are small species as the Maui dolphin, which measures on average 1.7 meters in length and weighs about 50 kilograms, and there are large species that reach 5 to 8 meters in length like the Orca (Orcinus orca) which, by the way, is the largest and heaviest extant dolphin.

The skin of dolphins feels soft to the touch although it has a thick epidermis covered with a thin layer of cornified cells. Despite this, it is extremely sensitive due to a large number of nerve endings it has on the exterior. Given this fragility, it damages very easy with any contact of a rough surface and even human fingernails, but if this happens, the healing process is fast and develops a dark scar in the tissue, which later turns white.

Beneath the skin, there is a thick layer of fat that dolphins use as an energy reserve in periods of food shortage, as an insulation to prevent heat loss in cold environments and as a resource that helps maintain the hydrodynamic shape of their body.

Most species have a gray or bluish color on the dorsal area and white or light gray in the ventral area. This coloration is particularly useful for camouflage because if you see a dolphin from above, its dark skin is confused with the ocean floor while when seeing it from below, the color of its belly is similar to the ocean surface, brightened by the sunlight.

However, not all species have the same color pattern described above. The Amazon river dolphin (Inia geoffrensis) has a pink color on its skin, therefore is known as the “pink dolphin.” Also, some species have stripes or spots of different sizes, colors, and shapes.

The bone structure of dolphins is lighter than that of terrestrial mammals as it has to withstand less weight in the water. Dolphins have an adjustable rib cage, thanks to which they can swim in low-pressure environments without suffering damage. The neck is rather short because the seven cervical vertebrae are fused together.

The skeleton still retains vestiges of a terrestrial life, like a pair of floating bones under the backbone that should have been a pelvis.

On the other hand, the body of the dolphins is fusiform and hydrodynamic, perfectly adapted to life in the water. It has three main parts, head, trunk and tail, which include other elements.

External anatomy of a common dolphin.

Brain.
The brain of these cetaceans is large, and its mass is slightly greater than that of humans. It is 15-60 times bigger than the brain of a shark of similar size.

Eyes.
Located on each side of the head, they provide a broad field of view and are very sensitive despite the inability to identify colors. They can move independently of one another, but they are not able to look directly up or down.

Ears.
Dolphins do not have external ears, but they have small openings behind the eyes, which lead to an ear canal.

Blowhole.
It is the orifice located at the top of the head that serves to breathe and to make sounds. It has a kind of muscular membrane that prevents water from entering the body when the dolphin is submerged.

Melon.
It is a spherical organ located in front of the skull, used for echolocation. The rounded shape of this mass of adipose tissue is what gives dolphins the shape of their forehead.

Mouth.
Located in the front area of ​​the head, it has several teeth whose number varies according to the species, but they are around 80-100. The jaws are elongated and play a significant role in the sensory system of the dolphin.

Dorsal fin.
It is on the top of the dolphin; they only have one dorsal fin that gives them stability when swimming, preventing them from spinning involuntarily in the water. There are a couple of species that lack this dorsal fin.

Flippers.
In the lower part of their body, dolphins have two pectoral flippers which are curved, useful for directing and controlling movements and speed when swimming.

Lungs.
Like all mammals, dolphins have lungs and breathe air. They are the organ of the respiratory system which process the air inhaled through the spiracle. Unlike humans that do it instinctively, dolphins breathe conscientiously.

The orca is the largest and heaviest dolphin.

Stomach.
It is just in the middle part of the body, and it has several sections.

Intestines.
Just as in other mammals, they serve to absorb nutrients from the food and remove the unused material from it.

Bladder.
It is nearly at the end of the trunk, and it is tiny.

Post-anal hump.
It is a protuberance in the lower part of the body only found in adult males.

Genitals.
Also in the inferior part of the body, the genitals of dolphins are hidden in slits. Males have two slits that conceal the penis and anus, while the females have only one that contains the vagina and anus, and two mammary slits on both sides of this one.

Peduncle.
It is the narrow section that connects the flukes with the rest of the body.

Caudal fin.
They function as a propellant when swimming. It moves from top to bottom and not from side to side as in the case of fish.

Flukes.
They are the two sections of the caudal fin.

Sleeping.
Dolphins do sleep, but it may not appear that way when you observe them; This is because only one hemisphere of the brain will rest at a time. The other allows them to be alert for dangers and to reach the surface for breathing at regular intervals.

Another unique characteristic of the dolphin anatomy is that they don’t have hair covering their body; They may be born with a few hairs, but they lose them soon after being born.