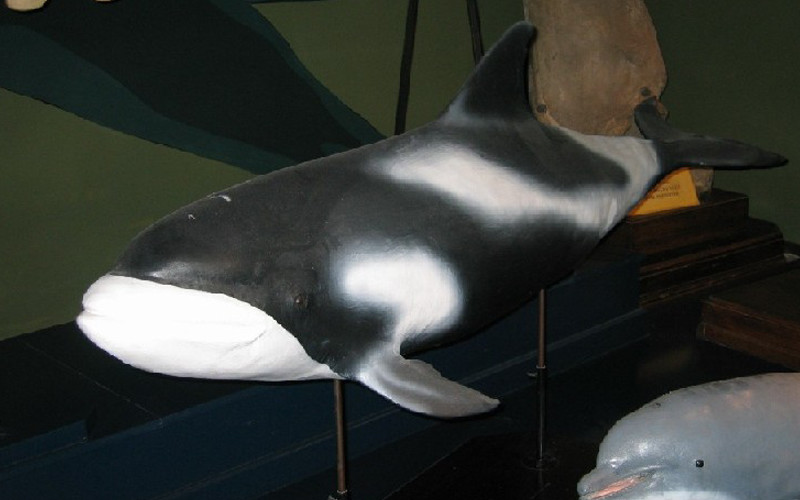 Although the common and scientific name of this toothed cetacean refers to the white color of its snout, they may or may not have the beak of this color.

The white-beaked dolphin is the largest member of the genus Lagenorhynchus, and it was one of the first dolphins of this genus to be scientifically recognized, back in 1846.

Morphology.
It has a sturdy body, a short and thick beak and a narrow tail. It has a big and sickle-shaped dorsal fin just in the middle of its body.

Weight and size.
Adult individuals measure between 2.3 and 3.1 meters in length and weigh 180 to 354 kilograms. Males are slightly larger than females.

Skin Coloration.
It has a black or dark gray dorsal area. The sides usually have lighter stripes with different shades of light gray almost white. Its beak may exhibit a whitish color, but it can also be gray and even black.

Distinctive characteristics.
It has a white patch that starts just behind the dorsal fin and ends before the tail flukes.

The white-beaked dolphin inhabits the waters of the North Atlantic Ocean. In the western part of this ocean it dwells from the Strait of Davis to the south of Cape Cod (Massachusetts, United States) passing through the center and the west of Greenland; In the east of the ocean is distributed from Iceland to Portugal but in the north reaching as east as the Scandinavian peninsula. Its locations include the Barents Sea, the Baltic Sea, Ireland, Canada, the Irish Sea and the United Kingdom. It also resides in the west of the Mediterranean Sea.

It inhabits the cold subpolar waters of its distribution zone, in the continental shelf, along with the edge of this and in coastal waters; Mainly in waters whose depth does not exceed 200 meters.

It feeds on a large variety of mesopelagic fish mainly those that group in schools, like the capelin, haddock, hake, herring and cod. It also consumes crustaceans and cephalopods (octopus and squid), like most dolphins.

This species performs hunting techniques cooperatively on the surface of the ocean. It sometimes associates with humpback whales (Megaptera novaeangliae), Fin whales (Balaenoptera physalus) and other dolphins, including those of the species Tursiops truncatus (bottlenose dolphin).

The White-beaked dolphins create social groups composed of 5 to 50 individuals (generally less than 30), but they occasionally form larger groups of up to 1,500 dolphins. There is little information on the social structure of this species, but the separation by age and sex can occur. They sometimes mix and associate with large species like fin whales and humpback whales, and other small cetaceans, especially in the feeding areas (Reeves et al. 2002). These gregarious dolphins often perform acrobatic jumps on the surface and frequently approach ships to ride the bow waves.

The white-beaked dolphin reaches sexual maturity when it is between 7 and 13 years old or when they grow to a length of 2.4-2.5 meters. The gestation period lasts about 11 or 12 months. Subsequently, a single offspring is born in the summer (months of May to September) measuring about 1.1-1.2 meters long.

Additional information on the reproduction of this species is so far unknown.

This species has been and still is hunted in the waters of the Faroe Islands, Iceland, Norway and Greenland, and even in Canada off the coast of Newfoundland, to obtain its oil and meat. Also, they are affected by the contamination of their habitats with heavy metals and organochlorines.

It is under protection by the ASCOBANS (Agreement on the Conservation of Small Cetaceans in the Baltic, North East Atlantic, Irish and North Seas) and in the Red List of the International Union for the Conservation of Nature, it appears as a species with a conservation status of “Least Concern.”