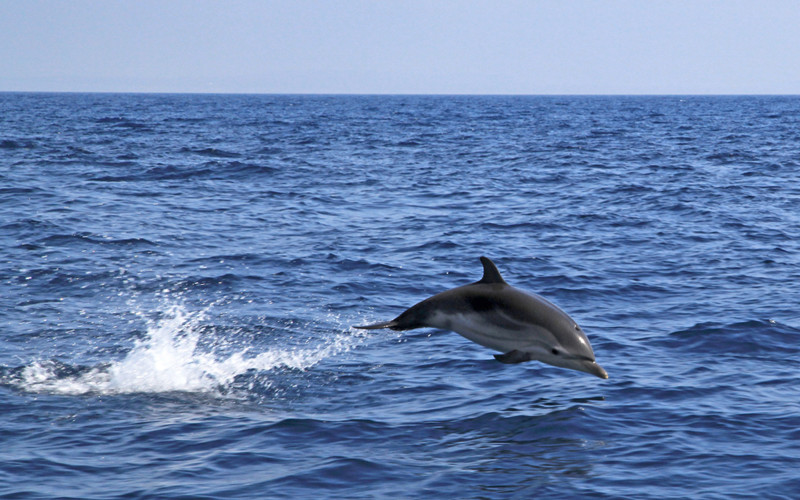 The striped dolphin is among the most studied members of the Delphinidae family and is very abundant in the oceans. In 1833, the botanist Franz Meyen described the species and named it Delphinus Coeruleoalbus from the study of a specimen from Rio de la Plata.

There is a slight variation in the body of the populations of the striped dolphin, but it is only in the shape of the skeleton and not the external appearance.

Morphology.
Its fusiform body is robust but able to perform graceful movements. It has a narrow, long and prominent snout, a rounded forehead because of the pronounced melon, long and narrow pectoral flippers and a curved dorsal fin located in the center of the dorsal area.

Weight and size.
It is a medium-sized dolphin. The adult male has a length of 2.6 meters and a weight of 160 kilograms. The female measures up to 2.4 meters and weighs about 150 kg.

Skin Coloration.
The dorsal region is blue or blue-gray, and the lower ventral area is lighter blending from light gray to whitish. There is a pattern of dark stripes extending from the eyes to the flippers and another set that begin near the eyes and end in the anus. On the sides, there is an area of light skin before the start of the caudal fin, but the pectoral flippers are dark.

Distinctive characteristics.
The easiest way to recognize a striped dolphin is observing the coloring pattern of its body.

Its habitats are waters with temperatures ranging from 10° to 26° Celsius degrees but tend to avoid waters that are less than 20° Celsius. Commonly it thrives in areas of upwelling and convergence. It is a dolphin mainly pelagic.

The diet of the striped dolphin is not the same in all the regions where it lives. It is a carnivorous animal that feeds mainly on bony fish, cephalopods, and crustaceans. The prey of this dolphin is small animals, measuring 6 to 30 centimeters in length.

The population of the Mediterranean Sea consumes almost entirely cephalopods, octopus, and squid. Those living off the coasts of Japan and South Africa prefer to eat lanternfish (Myctophidae family), and in the northeastern Atlantic, the diet of striped dolphins is 56 percent cephalopods, 39 percent fish, and 5 percent crustaceans. Again, lanternfish are the favorites of this population, but the cod fish is also appreciated.

It has an opportunistic feeding style and can look for its food in any area of ​​the water column. If necessary, it submerges to depths of 200 to 700 meters. The decomposition of the food found in the stomach of some specimens studied suggests that these dolphins wait for the sunset or the early night to carry out their feeding activities.

The striped dolphin groups in pods of 100 to 500 individuals organized by age, gender and reproduction status. However, sometimes they form larger groups with thousands of dolphins.

The division in the society of these dolphins is in groups of young individuals, adults in breeding age, and non-breeding adults. The association with other species of dolphins or animals is rare.

It is a very active, energetic and extremely agile dolphin. It can jump out of the water, ride the bow waves of boats, spin in the air and perform a particular movement that consists of jumping quickly and turning several times in the air before diving back into the ocean. On the other hand, its capacity of communication is similar to the one of other dolphins, based on the emission of clicks, squeals, and whistles.

The striped dolphin performs some seasonal travels related to warm ocean currents, with differences between populations. For example, the dolphins of the Mediterranean Sea move north as soon as they feel that the temperature of the ocean begins to rise.

Mating seasons differ between regions. The dolphins living in the Mediterranean sea commonly mate during the fall; While populations dwelling in the Northwest Pacific breed during the winter months. A female has offspring every four years, but this is only an estimate and may be less or more time.

The gestation period of a striped dolphin lasts between 12 and 13 months, after which a single offspring is born, measuring between 90 and 100 centimeters. Summer and fall are the seasons with more births. The caring mother, nurses its calf for 12 -13 months.

The striped dolphin is the target of some fisheries that seek to get their meat or keep them away from the boats, as the cetacean can approach to “steal” fish. Japan is the country with the largest direct catches, with numbers ranging from 600 to 800. In the Mediterranean Sea, the number of dolphins captured is lower. In this case, they hunt these dolphins for human consumption.

Another threat is bycatch in several parts of the world. The problem is that some fishing is illegal and there are not records of all deaths. In the western Pacific Ocean, the deaths of dolphins trapped are numerous: from 2,000 to 4,000 individuals.

Overfishing, contamination of their habitat and noise pollution complete the range of threats. Nevertheless, it is on the Red List of the International Union for the Conservation of Nature (IUCN) as “Least Concern.”

In the United Kingdom, the striped dolphin is under the protection of the UK Biodiversity Action Plan and the Wildlife and Countryside Act of 1981. Also, it is in the Agreement on the Conservation of Small Cetaceans in the Baltic, North East Atlantic, Irish and North Seas (ASCOBANS).