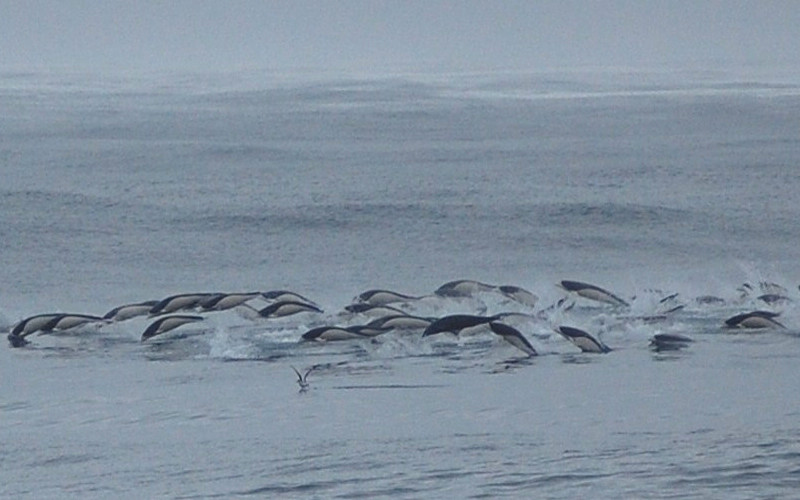 This dolphin is one of two species of the genus Lissodelphis. It is a toothed cetacean found only in the southern hemisphere. Bernard Germain de LacépèdeIt described this species in 1804 based on a specimen he saw near the island of Tasmania.

Morphology.
This dolphin has the thinnest body of all cetaceans. Its body, incredibly hydrodynamic, is similar to the one of the northern right whale dolphin (Lissodelphis borealis) with a slender shape, a short snout and lacking the dorsal fin. It has a tilted forehead instead of rounded like most species and pectoral flippers with a sickle shape.

Weight and size.
The adult dolphin measures 1.8-2.9 meters in length and weighs between 60 and 100 kilograms. The sexual dimorphism is very slight, being the male bigger than the female.

Skin Coloration.
The body of this cetacean is bicolor. The dorsal area is black from the forehead to the tail lobes. The white color starts from the snout and continues to the belly and up to the middle of both sides. The pectoral flippers are usually gray, and some individuals exhibit small white patches on the head.

Distinctive characteristics.
Their coloring pattern and the lack of dorsal fin are the main distinguishing features. There may be confusion with the northern right whale dolphin because they have a similar appearance, but the difference between them lies in the fact that the sides of this dolphin are entirely black, and the snout is not white as the southern species. Besides, the distribution area of each species is far from each other.

It has a circumpolar distribution only in waters of the southern hemisphere, between the Antarctic Convergence and the Subtropical Convergence. Its limits are between latitudes 30° south and 65° south, being the north of Peru the northmost limit of its distribution.

It is present in countries such as Australia, Chile, Argentina, New Zealand, Uruguay, South Africa, Mozambique, and Peru.

It is a pelagic dolphin that prefers high seas and only approaches the coasts if the waters are deep on the edge of the continental shelf. The temperatures of their cold habitats range between 1° and 20° Celsius degrees.

Studies of the stomach of specimens of this species report a carnivorous diet in which mesopelagic fish, crustaceans, and cephalopods have preponderance. Their preys commonly inhabit depths between 200 and 1,000 meters.

Given its thin and hydrodynamic body, most scientists think that this dolphin is quick and agile to capture its prey, but if it feeds on the surface or in lower layers of the water column, it is still unknown.

Some of its favorite prey are lanternfish (Myctophidae), bigeye tuna (Thunnus obesus), squid, shrimp and species of the family Euphausiacea, which includes several species of krill.

It is a highly gregarious species which the creation of pods influence its social and individual behavior. A pod of Lissodephis peronii is usually composed of more than 100 members and may have up to 1,000 members. However, the average number of dolphins in a group is around two hundred.

If a dolphin is alone without company, it shows a relative shyness and avoids the ships. On the other hand, if a dolphin is with its pod, it shows more activity and dynamism. They can jump and hit the water with their belly or tail and create disturbances on the surface of the ocean due to the massive number of individuals in the pods.

Pods usually submerge for more than 6 minutes, but a single dolphin only dives for a very short time, so it tends to surface every 10 seconds or so. When swimming slowly, it only keeps the spiracle and part of the head out of the water; this is usually done while resting or during periods of low activity.

To date, there is no significant data on the existence of migration patterns, although it is likely that during the spring and summer they move northwards.

There is a lack of information about most of the breeding habits of the southern right whale dolphin, but research suggests that males reach sexual maturity when they have a length of 2.51 meters and females are sexually mature with an approximate length of 2.18-2.28 meters.

The birth season is not known although in winter and spring more calves are seen, so perhaps the births occur around those seasons.

A calf can measure 0.86 meters in length and weigh about 5 kilograms at birth. Its longevity is approximately 42 years in the wild.

It is true that there are more doubts than confirmed facts about this species. In fact, not even the International Union for Conservation of Nature (IUCN) has sufficient data to assess its conservation status which has a “Data deficient” classification due to the lack of information about the species.

However, this does not mean that the southern right whale dolphin is out of danger as this species has several threats, most of them derived from human activities. In Peru and Chile they have been caught for consumption, and in other regions, bycatch is common when these cetaceans become entangled in gillnets, particularly those trying to catch swordfish.

There are no specific conservation efforts for the Southern right whale Dolphin yet, but CITES has included it in Appendix II of endangered species where this organization lists the animals whose commercial trade must follow strict regulations.