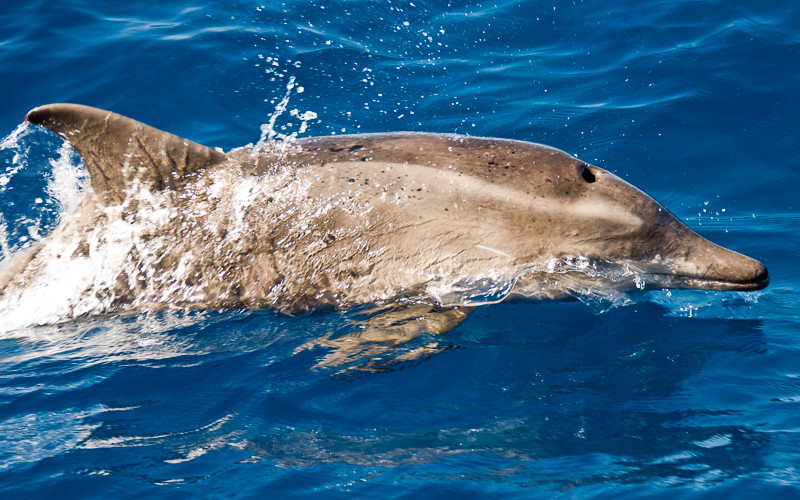 Some think that the rough-toothed dolphin has a primitive looking. It is a species first described in 1823 by Georges Cuvier and scientifically named in 1928 as Delphinus bredanensis. Its unusual colloquial name comes from the characteristics of its teeth, in fact, rough.

This dolphin has an appearance similar to that of the bottlenose dolphin (Tursiops truncatus), so it can be confused with this species, but it is easy to recognize if taking a look at the following features:

Weight and size.
The length of its body is between 2.09 and 2.83 meters while its weight oscillates in the range 90-155 kilograms.

Morphology.
Its body seems longer because it is not robust as other dolphins, and some people even say that it looks like a reptile. Its head is small, and its long snout is not very well defined. It has a noticeable melon, and its eyes are somewhat large if compared to other dolphins.

This dolphin has big and triangular flippers. The sexual dimorphism is almost unnoticeable, as only some males may have larger dimensions than females, but the former do have a more pronounced post-anal hump.

Skin Coloration.
The belly and the chin have a light color contrasting the dark blue or gray-blue in the dorsum. The tip of its snout is pink. The skin shows many scars, marks of previous fights.

Distinctive characteristics.
As it could not be otherwise, their teeth are the most distinguishing feature: they have vertical ridges and stripes on the surface, visible only observing the dolphin’s mouth. The undefined snout that keeps the line of the head instead of having a separating ridge is another distinctive feature.

Its distribution range includes the Atlantic, Pacific and Indian oceans between latitudes 40° north and 35° south. It inhabits deep waters of regions with tropical and subtropical climate, but in the coasts of Brazil and West Africa, it can stay near the shore. It lives both in high seas and semi-enclosed aquatic bodies such as the Red Sea, the Gulf of Thailand, the Caribbean Sea, the Gulf of Mexico and the Gulf of California.

They like waters with depths above 1,500 meters and temperatures around 25° Celsius. Their habitat is selected depending on the amount of food that the area has, looking certainly for the places with abundant food.

Oddly, the stomachs of some stranded rough-toothed dolphins contain remains of algae. This finding does not mean that it is an omnivorous animal since they could have eaten the algae by accident. Under normal conditions, this carnivorous dolphin feeds on fish and cephalopods such as:

It feeds in large groups which may have tens or hundreds of individuals. At the moment of hunting, they submerge for up to 15 minutes to reach the benthic prey or to chase fish schools. Size is important for them, even more, if the fish is large, better. Once it holds a prey with its teeth, it tears the flesh and sometimes shares the food with its companions.

The fishermen have a bad opinion about the rough-toothed dolphin since it usually takes the fish used for bait. On the other hand, it occasionally associates with whales and other dolphin species to get their food.

It forms large pods (up to 300 individuals), and their sociability extends to species such as tunas, whales, dolphins and seabirds.

It is a skilled and fast swimmer with great lungs that allow it to stay submerged for a considerable amount of time. Therefore, it does not surface as often as other dolphins. Yes, it jumps out of the water and rides the bow waves of boats, but it is more usual to notice it when swimming under the surface with its dorsal fin visible or with the head above the water.

The female shows an unusual behavior that consists in swimming placing its offspring together with another dolphin in an attempt to attract the attention of the members of the pod or ask for support.

In 2007, a study on the behavior of this species found that it spends 26.7 percent of its time traveling. 17.5 percent following with boats, 11 percent doing social activities, 14.9 percent feeding, 9 percent Stationary, 7.1 percent playing with objects, 3.8 percent in sexual practices and the rest swimming in a constant direction.

When males reach the reproductive age between 5 and ten years, it looks for a mature receptive female that reached sexual maturity between 9 and ten years of age.

There isn’t much information about the reproductive habits of the rough-toothed dolphin, not even the precise duration of the gestation period. The calves are born measuring 1 to 1.3 meters in length and are well protected by their mother. At two months old, they begin to feed on small fish, and the mother decreases the time devoted to its care.

Its longevity is around 32-36 years in the wild.

Although it has a conservation status of “Least Concern” on the Red List of the International Union for the Conservation of Nature (IUCN), the main threats of this dolphin include:
a) bycatch in fishing nets,
b) direct hunting in some eastern islands.
c) pollution of their habitat.

This dolphin is used for human consumption or as bait for sharks. In the Antilles, Japan, East Africa and in the Solomon Islands, the former practice is possible. In the period 2004-2009, a study discovered that some of the dolphins trapped in the nets suffered a significant loss of hearing as the result of several genetic, congenital and noise-related factors.

Specific conservation efforts for this species do not exist. CITES (Convention on International Trade in Endangered Species of Wild Fauna and Flora) has included this dolphin in Appendix II of species under trade control.