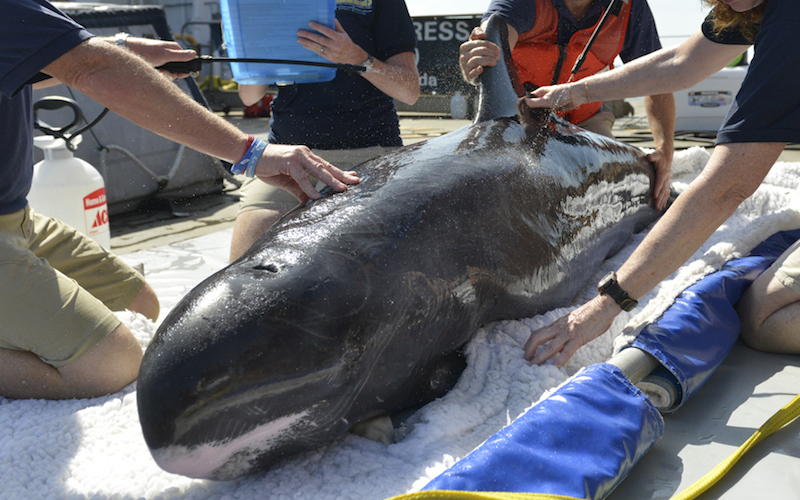 Photo by Coast Guard. As a work of the U.S. federal government, the image or file is in the public domain.

The pygmy killer whale despite its name, is not closely related to the orca (Orcinus orca), the so-called “killer whale,” but it has similar features which gave it this name. The naturalist John Gray described this species in 1874, but previously in 1827, the report of another scientist included it. Despite these works, scientists did not take much notice of this dolphin, which remained almost unknown for many years.

This situation changed in 1954 when a Japanese cetacean scientist Munesato Yamada published his observations based on parts of the body of a specimen. This researcher also proposed the name “pygmy killer whale” for the species.

Morphology.
The pygmy killer whale has a thin body, a rounded head, and a narrow tail. It lacks the long snout that many people associate with dolphins. Its dorsal fin is high and curved at the tip just like its pectoral flippers. The lower jaw has 20-26 teeth while the upper jaw has only 16-24.

Skin Coloration.
Its dorsal skin is dark gray, the ventral region is white, and on the sides the black blend with a light gray layer. Its lips are white.

Distinctive characteristics.
The curvature of its dorsal fin, its gray skin, white lips and the lack of a pronounced snout are the features that make the pygmy killer whale different from other species.

The distribution of the pygmy killer whale includes the tropical and subtropical waters of the Pacific Ocean, Atlantic Ocean and the Indian Ocean between latitudes 40° north and 35° south. Encounters with this species are extremely rare and are less than 1 percent of the total sightings of toothed cetaceans. Nevertheless, there are more sightings in the eastern tropical Pacific and the southern Atlantic Ocean than everywhere else.

It likes to inhabit waters with up to 500 meters deep with warm temperatures above 18° Celsius. It rarely approaches the coasts, and when it does, usually approximates volcanic islands.

According to remains found in the stomachs of some specimens of pygmy orcas, it is a carnivorous and predatory dolphin that feeds on several species of fish, cephalopods and even small cetaceans. Its main foods are octopus, squid (Families Onychoteuthidae and Ommastrephidae), sardines (Family Clupeidae) when it remains in captivity.

It probably looks for food at night and consumes slightly large prey for its size because its teeth are also relatively large.

Like many other dolphins, it is a species that likes playing. It frequently jumps out of the water, strikes its pectoral flippers against the water, pulls its body out of the water and even hit the surface of the ocean with the head. However, it is perhaps a dolphin less active than other dolphins since it has been seen resting on the surface in the company of other pygmy killer whales, all forming a group swimming in the same direction.

It is a highly social species that creates small groups. The pods have about 12-50 members but occasionally form groups of hundreds of individuals. It is a species very aggressive when kept in captivity.

There isn’t much information about the reproduction of the pygmy killer whale. The researchers think that they reach sexual maturity according to its length, that is, when males reach more than 2.16 meters and when females exceed 2.21 meters. In other regions, this cetacean reach maturity with a length of 2.31 meters, however, the age at which this occurs is entirely unknown.

The other known data on the reproduction of the pygmy killer whale is about the birth of the single offspring. The length of the calf is around 0.8 meters, but more studies and observations are needed to support this data and get conclusive information.

As expected for a little known and understudied species, the Red List of the International Union for the Conservation of Nature classifies the Pygmy killer whale as “Data deficient.”

However, it is a species highly vulnerable to loud noises and perhaps to climate change. In Indonesia, Japan, Sri Lanka and areas of the Caribbean, it is the subject of direct fishing for human consumption of meat and oil. Particularly in Sri Lanka, fishers use parts of its body as bait for sharks and other species of fish.

In specimens off the coast of Florida, United States, scientists found traces of hydrocarbons in their body tissues as the result of water pollution that affects the cetacean.

At present, there are no specific strategies focused on the conservation of the pygmy killer whales. However, it is in Appendix II of CITES (Convention on International Trade in Endangered Species of Wild Fauna and Flora), in other words, it is a species that Although not in great danger of extinction, its trade must be strictly regulated.