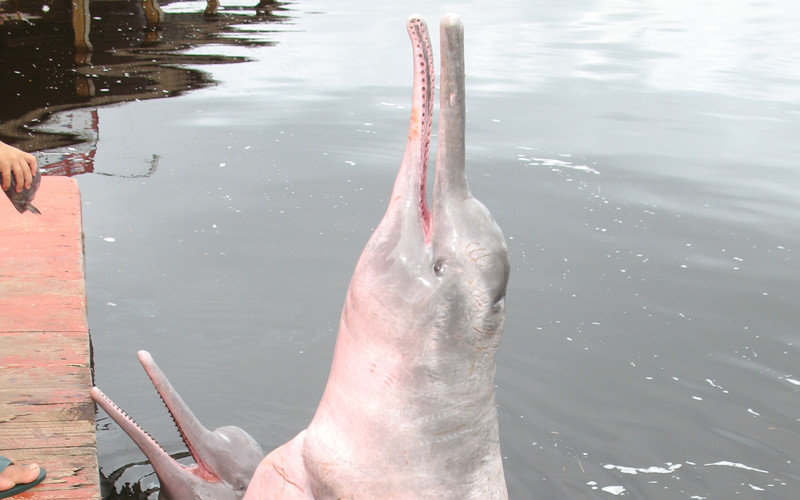 There are five species of dolphins that make their homes in rivers, being the most popular of them the Pink Dolphins also known as Boto, Boutu or Amazon River dolphins as it inhabits the Amazon River.

The scientific name of the Pink Dolphins from the Amazon is Inia Geoffrensis and they belong to the genus Inea, part of the family Platanistoidea, which is conformed by the five species of river dolphins.

Pink dolphins are not the same dolphins that you would see in the ocean; they have special adaptations to their habitat. In fact, river dolphins are only distantly related to sea dolphins.

Among the five species of river dolphins, Amazon pink dolphins are considered the most intelligent of them, with a brain capacity 40% larger than that of humans.

Pink dolphins inhabit the Amazon River, but they can also be found in the Orinoco basins and the upper Madeira River as well. While they are mostly pink, these dolphins have various colored skins, which can be light gray, pink, or brown.

The Amazon River pink dolphins conform the largest population of river dolphins in existence as the other four species are functionally extinct or close to extinction.

These friendly and social creatures have been living for centuries in the Amazon and its tributaries, but the accelerated destruction of the Amazon basin have put them in a every time more dangerous situation.

The raise in contaminant levels of mercury have caused and increased number of deaths among pink dolphins, especially near gold mines where mercury is used as part of the gold mining process.

The increase of traffic in the Amazon River, also threatens these creatures as they are curious by nature and they sometime approach to vessels where they are easily hurt by the sharp propellers.

Additionally, the noise produced by engines and motors and the sound pollution caused by them, has been considered to produce a disorienting phenomenon in their navigations systems, causing the death of many pink dolphins.

What do Pink Dolphins Eat?

The boto cervical vertebrae are not fused allowing them to move their head up to 180 degrees, which is a great help for hunting in shallow waters and floodplains.

Hunting fish require some techniques like herding, where they round a fish pod to concentrate fish and take turns for feeding. This procedure is largely used by their oceanic cousins.

In the Amazon Region…There is a legend about the Boto or Pink Dolphin. According to the legend, the Boto turns from man to dolphin and backwards, changing shape at will.

The legend also states that when dolphins find young women on the shore, they changes shape and impregnate them.

This comes from the similarites between certain body parts of the Boto and humans.

There are several other superstitions about the Pink Dolphins in the Amazon River and around.

Pink dolphins can be found in pink, light gray or brown colors but there is not conclusive evidence of the reason why pink dolphins are pink.

It could be an adaptation to the river life or caused by the presence of capillaries near the surface of the skin what provide them such impressive color. Additionally, pink dolphins get pinker when they are excited or surprised, resembling blushing in humans.

The Amazon River dolphin is between six and eight feet long, and weighs between 185 and 355 pounds when it is fully grown.

Most species of river dolphins are almost blind, due to navigating muddy waters, but their brains are extremely large and well developed, however pink dolphins are considered to have a relatively good sight.

Pink dolphins appear to be the friendliest of all the river dolphins when approaching to humans and some stories of people being pushed to the shores by them are common among some tribes in the Amazon.

They swim up to 30 kilometers in one day, although they usually swim slowly looking for food at the bottom of the river.

“Amazon River Pink Dolphins are typically smaller than sea dolphins but they have longer snouts, an adaptation provided by evolution…”

How do Pink Dolphins Reproduce?

Males and Females mate to start a gestation period which is believed to last from nine to twelve months. Copulation is performed between males and females belly to belly.

Calves are born about 75 cm long and weighing a bit more than 1 Kg.

Pink dolphins deliver their babies when the Amazon River is at its high between the months of May and July.

It was founded in 1948 and groups 83 states, 108 governmental agencies and more than 10,000 scientists and experts from countries around the world.

The IUCN publishes a red list of threatened species which is a reference in the field and the base for conservation of species.

Union for the Conservation of Nature (IUCN)

How Do Pink River Dolphins Reproduce

Why Are Pink River Dolphins Endangered

Why Are Pink Dolphins Pink

Where Do Pink Dolphins Live