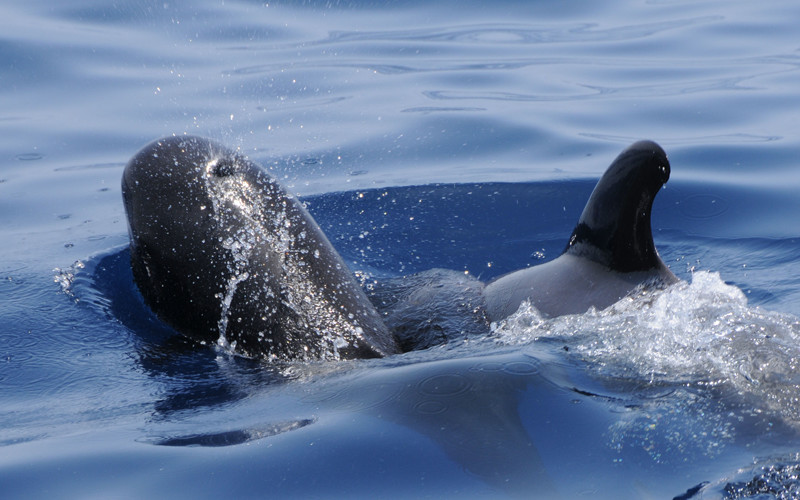 The Short-finned pilot whale is the name of the second largest species of dolphin, only surpassed by the orca (Orcinus orca).

This species is commonly called whale, without being one, because of its large size and its behavior similar to that of whales. It has the following characteristics:

Morphology.
From the body of the Short-finned pilot whale stands out a bulbous head, big and prominent that in the male is more notorious and in some old individuals hangs slightly above the mouth. The beak is missing from the head, and instead, it has a short snout. It has short pectoral fins and a sickle-shaped dorsal fin located near the head.

Weight and size.
Males are longer and heavier than females, so sexual dimorphism is present in the species. It measures about 5.5 meters while the opposite sex reaches a length of 3.7 meters. The weight of adults is 1,000-3,000 kilograms.

Skin Coloration.
Its skin has a dark gray or black color in most parts which contrast with a light gray or white stripes on the chest and neck. In the bottom of the chin, there is a light patch with anchor shape. Above the eye, it has a stripe running down the dorsum and extending backward from the dorsal fin. A white or light gray patch with a saddle shape is behind its dorsal fin.

Distinctive characteristics.
It is very similar to the Long-finned pilot whale and is often confused. The difference between them lies in the length of the pectoral flippers, which in this case are smaller.

It inhabits tropical, subtropical and warm waters of the world. Native to the Atlantic, Pacific, and Indian oceans, it does not venture beyond the latitudes 50° North and 40° South. Many individuals dwell in areas north of the Atlantic Ocean, the Western Pacific and the southern hemisphere.

There are populations from the Gulf of Alaska to Guatemala, from Eastern Europe to Africa, the Sea of ​​Japan, the Red Sea, Hawaii and the Strait of Gibraltar.

It is common in deep offshore areas near the continental shelf or deep underwater canyons. Sometimes it reaches coastal regions. It inhabits at waters with depths of 600-1,000 meters.

The primary food of the Short-finned pilot whale is not precisely fish, but cephalopods, mostly octopus, and squid. The 45 kilograms of food they eat per day also contain some small fish species and probably other marine mammals. Surprisingly, this cetacean sometimes chases sperm whales and other dolphins, although there is not conclusive evidence that is hunting them, it is thought to consume warm-blooded animals.

This dolphin looks for food at dawn and dusk. When it is time, it does very deep dives, of more than 600 meters, and can travel more than 1 kilometer of distance between its starting point and the final zone of feeding.

In this regard, the availability of prey occasionally makes them perform coastal movements and change their habits. Their dives relate with the ascension of their usual benthic prey to the upper water column. Another clear example: when the squid comes to spawn near the coasts, the calderón follows the trail and also resides there for a short time.

It is a social animal that gathers in pods composed of 10-60 members and sometimes hundreds and usually is not alone. The base of its society is the group of females with their offspring, and from them, the non-breeding females are considered a “database” that stores information about the pod.

In any case, the bonds between individuals are very close and intense, similar to that of the long-finned pilot whales (Globicephala melas). Cooperation is essential in the group, and even a female can provide care for a calf that is not her own.

It is mainly nocturnal and relegates its rest and its travels to the day. While there is no sun, it dives to hunt and socialize with its mates.

It always travels from one place to another, but there is no information about the migration patterns that follows. The short-finned pilot whale goes to other locations depending on the movements of its prey or the changes in water temperature.

The Short-finned pilot whale is polygamous. There is one male for every eight mature females which facilitates the mating opportunity to the former, but also the females mate with multiple males throughout their life. The interval between each delivery is 5-8 years.

The female matures between 7 and 12 years of age and the male between 7 and 17 years. However, the average maturation age of female and male is 9 and 14.6 years, respectively. The existence of a defined breeding season is unknown, but they can reproduce at any time of the year although most births occur during the spring, autumn and winter months.

Males join different pods and manage to mate with a female. Once it is pregnant, it moves to the group of mothers with calves and waits for 15 months the birth of its offspring. The calf receives care from its mother and other females of the pod and is weaned at about two years old.

During its lifetime, a female has 4 or 5 offspring, until she is about 40 years old. The last offspring of a female can feed with breast milk from the mother for up to 15 years!

The Short-finned pilot whale is in danger as a result of bycatch with gillnets, trawls and longlines, collisions with boats of any type, massive strandings and loud sounds that disturb their environment.

It is necessary to emphasize that humans have much responsibility for the deaths of these cetaceans. In Japan, the large number of catches are because the Short-finned pilot whale, like other cetaceans, is consumed in various Asian dishes.

This dolphin has a conservation status of “Data Deficient” on the Red List od the International Union for the Conservation of Nature. The Pacific Offshore Cetacean Take Reduction Plan implemented by the NMFS (National Marine Fisheries Service) regulates the use of fishing devices to reduce the numbers of deaths caused by the incidental catch of these dolphins.