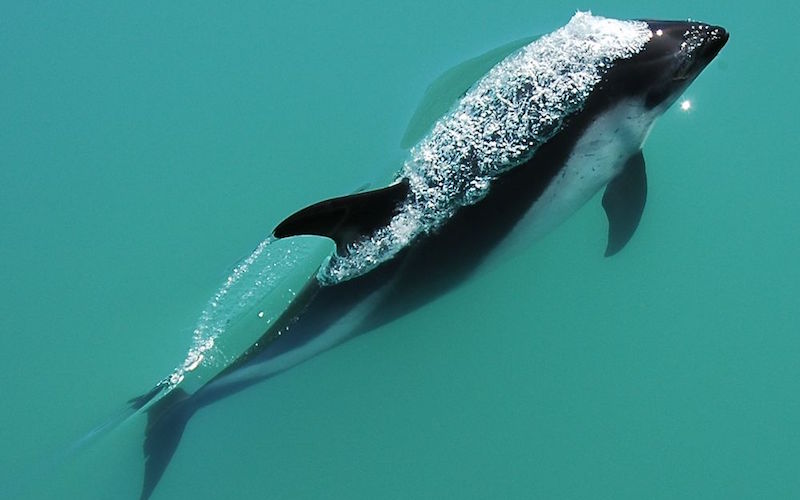 Photo by FDrummondH. This file is licensed under the Creative Commons Attribution-Share Alike 3.0 Unported license.

The Peale’s dolphin or Black-chinned Dolphin are the common names used to call this toothed cetacean of the southern hemisphere. In English, its common name, Peale’s dolphin is in honor to the naturalist Titian Peale, who described the species in the year 1848.

It is the largest species of the genus Lagenorhynchus, although in recent years a closer relationship with the genus Cephalorhynchus was discovered, which could end in a new taxonomic classification for this species shortly.

Morphology.
It is perhaps the most robust species of its genus but still conserves a body with a form of a torpedo. Its dorsal fin, pointed and curved, can reach up to 50 centimeters of height and its rounded pectoral flippers measure around 30 centimeters in length. It has a short beak; it is only about 5 cm long.

Weight and size.
There is a slight sexual dimorphism that produces greater dimensions in the case of males. An adult measures 2.18-2.20 meters in length while the females reach about 2.10 meters in length. The maximum size of an adult is 3.10 meters. They weight on average 115 kilograms.

Skin Coloration.
The color of its skin is remarkable and very striking. Black on the dorsum and white on the belly, this two-color pattern is interrupted by a thin white stripe that begins below the dorsal fin and widens as it extends backward. From the eyes to the middle of the sides there is a white area separated from the belly by a thin black band. The pectoral flippers and the dorsal fin are black.

Distinctive characteristics.
It is true that this species can easily be confused with the Dusky dolphin (Lagenorhynchus obscurus), but this dolphin has a dark face and a thin black band near the rib cage which makes it different.

This animal is endemic of the southern hemisphere, and they dwell between latitudes 30° south in the Pacific and 38° south in the Atlantic Ocean and 60° south where both oceans join, that is, in South American waters surrounding the southern tip of the continent. This distribution includes only Chile, Argentina, and the Falkland Islands; Around Tierra del Fuego, Cape Horn and the Strait of Magellan. Recently sightings of the species were reported near the Cook Islands, between Hawaii and New Zealand but this is unconfirmed data yet.

It is a coastal dolphin that inhabits seas with very shallow depths on the continental shelf. It dwells in the bays, inlets, canals, fjords and stay around the islands, on beds of seaweed and even on the sandbanks.

The Peale’s dolphin does not mind feeding alone but usually hunts in groups. It has a carnivorous diet and eats large quantities of fish as well as crustaceans and cephalopods. The prey most consumed by this species are:

It has a very varied diet. The feeding process begins with the formation of groups of 5 to 30 individuals who stay underwater for 10 seconds-1.5 minutes. They have a marked preference for searching algae beds. When they find prey, they surround it and begin to eat. If the victims are a school of fish, they spend time chasing, corraling and eating them in organized turns.

The information about their reproductive habits is very scarce. What is known is that the female has one offspring per delivery and gives birth during the spring to autumn after a gestation period of 10 to 12 months.

When births are close, the mothers approach to areas close to the coast. There a calf is born with a length of approximately 0.9-1.25 meters, which swims next to its mother as soon as it leaves the belly. The offspring is cared for about 18 months or until it is two years old.

The pods of Peale’s dolphins have few members, between 2 and 20 individuals although there are groups as small as 2-4 or as large as 100 dolphins. These large groups, if created, are in turn segmented into smaller social clusters. They usually hunt by cooperation, but a hypothesis assumes that this happens only when there is abundant food.

They occasionally associate with other species of dolphins, especially the Commerson’s dolphin (Cephalorhynchus commersonii) and the Risso’s dolphin (Grampus griseus).

It is a shy dolphin that sometimes comes close to the boats but not often. From there you can see it jumping, riding the bow waves and splashing water with its tail.

No migration patterns are known, but southernmost individuals are believed to follow fish movements.

The Red List of the International Union for the Conservation of Nature does not have sufficient data to assess this species according to its state of conservation. However, since the 1970s it has been exploited to use parts of its body as bait for crabs and is not free of the danger that gillnets mean.

In addition to direct and incidental catch, contamination of their habitat with organochlorines endangers their health, as well as tourist rides that offer dolphin observations can disrupt their life underwater.

The Peale’s dolphin is in Appendix II of CITES (Convention on International Trade in Endangered Species of Wild Fauna and Flora), where the species whose trade requires strict regulation appear. Also, the Chilean government has implemented measures to reduce the use of dolphin meat as a crab bait, and because of this, it seems that the number of catches for this purpose has reduced.