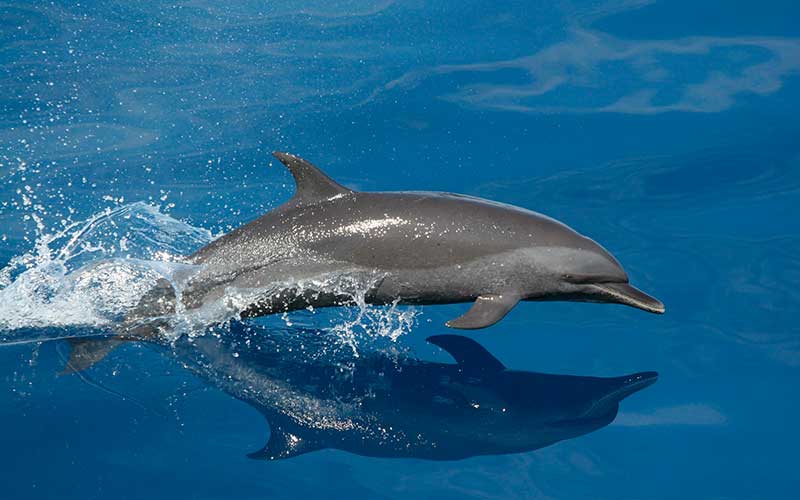 The pantropical spotted dolphin is a toothed cetacean typical of temperate and tropical waters. John Gray, a British zoologist, was the first scientist to describe it in 1846.

Morphology.
Like other members of the genus Stenella, this species has a thin, small and hydrodynamic body. It has a long and thin snout separated from the melon by a fold. It has a narrow, curved and sickle-shaped dorsal fin.

Weight and size.
The male of the tropical spotted dolphin is larger than the female. It has an average weight of 120 kilograms and a length of approximately 2.5 meters.

Skin Coloration.
The upper body has a dark gray color sprinkled with light spots that often overlap. The lower part of the jaw, neck, and belly, has a lighter color sprayed with dark spots. The sides have three tones of gray that blend into each other and a dark gray stripe from the eyes to the base of the snout.

Distinctive characteristics.
There is not much to add since the main way to identify the species is to observe its thin body and the skin coloration pattern, characterized by multiple light and dark spots. It has similar resemblance with other species of the genus Stenella. Therefore, the color patterns are paramount to distinguish them from the others.

It dwells in tropical, warm and temperate waters of the Atlantic, Pacific and the Indian Ocean between latitudes 40° north and 40° south. In the eastern Pacific Ocean lives from Mexico to Peru. In the south, it thrives in waters of Argentina, New South Wales and the Province of Cape of Good Hope. There are larger populations in the southern areas of their distribution range.

The Persian Gulf, the Red Sea, the Gulf of Mexico, the South China Sea, the Bay of Bengal, the Arabian Sea, and the East China Sea are also habitats of the pantropical spotted dolphin.

It rarely approaches to areas near the coast. On the contrary, it is usually 163 kilometers away from the shore in waters whose depths are less than 50 meters, and their temperature exceeds 25° C. Those who live in the Atlantic Ocean are almost always offshore, but in the eastern Pacific, they venture to come close to the coast.

The pantropical spotted dolphin consumes about 56 species of fish and 36 species of cephalopods.

The pantropical spotted dolphin feeds on epipelagic and mesopelagic fish as well as on crustaceans and cephalopods. Specifically, it consumes about 56 species of fish and 36 species of cephalopods, with a greater predominance of lanternfish (myctophids). In some regions, it feeds on flying fish and crab larvae.

The feeding time begins at night when the prey reaches the surface of the ocean, and the dolphin detects, follows and chases them to feed on these animals. Probably in the eastern Pacific Ocean, this dolphin feeds opportunistically.

Females breastfeeding consume more fish than squid because the former are richer in calcium, phosphorus, and protein.

It is an extremely gregarious species that associates with other dolphins of the same species, but also with other species of animals. Near the coasts, the pods have a few hundred spotted dolphins, but in high seas, the pods can have up to thousands of individuals. A society of these dolphins usually has groups of:
a) Mothers and their offspring,
b) Adult males and
c) young dolphins.

The dolphins of this species that live in Japanese waters are a unique case. After weaning, at about the age of 2 years, the little ones join groups along with other very young individuals. The arrival of sexual maturity coincides with its return to the original pod.

Their associations are designed to facilitate various activities. It has been seen interacting with other oceanic dolphins and even with yellowfin tuna (Thunnus albacares).

It is very fast, and it can reach speeds of 22 to 28 kilometers per hour. It jumps very high off the water or very low at great speed; this is common in the young dolphins.

It makes seasonal migrations in some parts of the eastern Pacific and off the coast of Japan. In the summer, the individuals that inhabit near this country travel towards the north and in winter they move to the south; One of its objectives is to visit areas with abundant prey.

The gestation period is approximately 11 months, and there is a higher incidence of births during the spring and fall. Only one offspring is born, but there is a register of the born of twins and another case of a 35-year-old pregnant female.

The duration of the breastfeeding period extends for 1 or 2 years after birth. However, the mother can continue breastfeeding its offspring even when she is pregnant again. At six months of age, the calf begins trying solid foods.

Some populations of this species have been reduced or disappeared.

In its natural habitat, the pantropical spotted dolphin is predated by killer whales and sharks. Once again, the human activities burst into the natural life of a species and cause more problems than benefits.

The eastern Pacific has been a killing area since fishers are aware of the association of the yellowfin tuna and the pantropical spotted dolphin. The fisherman does not want the Dolphins only the tuna, but they capture them together after following the trail of the cetacean to reach its target. During the process, the dolphin is under stress and get killed during the catch. The consequence: some populations have been reduced or disappeared.

In Japan, the Philippines, and the Solomon Islands, the problem is the intentional catch since its meat is used for human consumption or as bait. Other threats include bycatch and pollution of their habitat.

The indisputable reduction of the populations of this species triggered the alarms. In 1979, the Inter-American Tropical Tuna Commission (IATTC) launched a program to conserve dolphins and fortunately has had positive results. The Southwest Fisheries Science Center of the National Oceanic and Atmospheric Administration (NOAA) has launched two programs for dolphin conservation:

– The Dolphin Energetics Program.
It involves tuna fishing strategies that do not include the use of dolphins.

-The Dolphin Safe Program.
It determines the reasons for the recovery of dolphin populations in the eastern tropical Pacific Ocean.