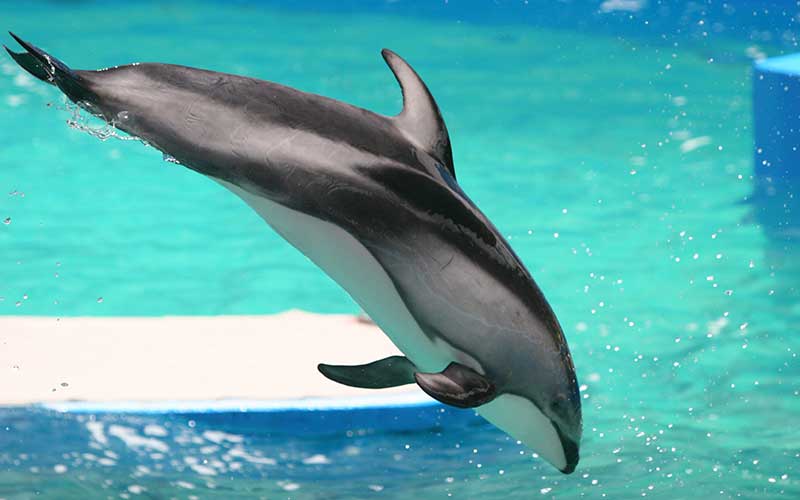 The waters of the North Pacific Ocean are the home of this species physically similar to the dusky dolphin (Lagenorhynchus obscurus) and in fact, separated from this species about 2 million years ago.

The Pacific white-sided dolphin is a species that received its name in 1865 thanks to the mammalogist Theodore Nicholas Gill.

Morphology.
It is a small species, with a robust body and a short but thick beak, as the other members of the genus Lagenorhynchus. Its dorsal fin is large, high and very curved and its pectoral flippers are thin and pointed.

Weight and size.
There is sexual dimorphism in the species making evident the largest size of the males versus the females. The length of a male adult is up to 2.5 meters with a weight of 200 kilograms while the female measures about 2.3 meters and weighs up to 150 kg.

Skin Coloration.
It has a very characteristic coloring pattern. The dorsum is black with the presence of dark bands that begin near the eyes and end near the tail, passing through the sides. The lower part of the body is white and is bordered by a thin dark band. Their pectoral flippers are bicolor, this is, they are black and white, and the same happens with the dorsal fin. The caudal fin is completely dark.

Distinctive characteristics.
It is easy to confuse the Pacific white-sided dolphin with the Dall’s porpoise as they both have a similar color pattern. It is necessary to look at the colors of the dorsal fin of the dolphin, which has the white color in a vertical way instead of the nearly horizontal in the case of the porpoise.

The Pacific white-sided dolphin has a distribution in the temperate waters of the North Pacific Ocean. They inhabit an area from the Aleutian Islands and the Gulf of Alaska in North America to the state of Baja California in Mexico. In the western Pacific, it does not go beyond Japan and the Kuril Islands. It is present in the Sea of ​​Japan, the Bering Sea, the Sea of ​​Ojotsk and the Gulf of California.

It likes the deep waters of the platform and the continental slope, in temperate climates and the high sea except for some occasions when it gets close to the coasts which have submarine canyons. The sightings of this species indicate that it typically remains 160 kilometers away from the coast.

This opportunistic predator feeds with its pod in groups composed of 10-20 individuals who submerge for more than 6 minutes to search for prey in their environment. For this, the groups coordinate and cooperate to chase and trap fish schools.

They do not eat the same prey in all geographic regions where they inhabit, but usually, they eat small animals. Individuals living in Canadian waters prefer herring and after that salmon, cod, shrimp, and capelin. The Baja California dolphins consume about 13 species including salmon, herring, haddock, shrimp and squid. For their part, dolphins living near Japan enjoy mesopelagic fish and cephalopods. 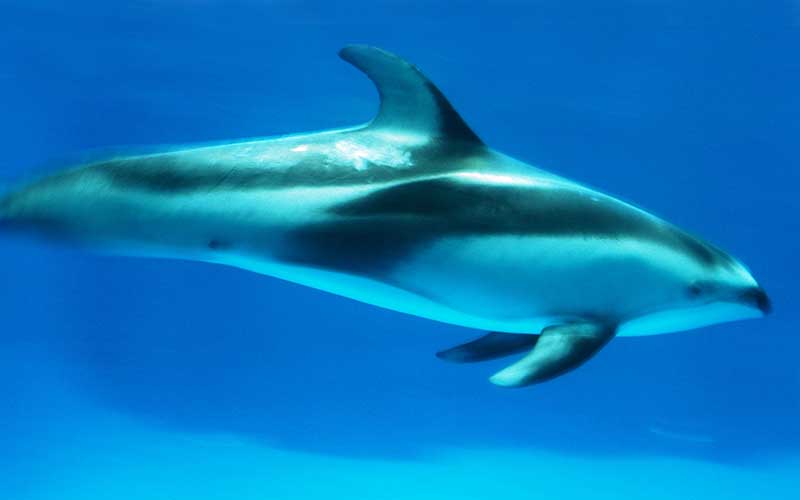 The Pacific white-sided dolphin is highly social and gregarious; it swims in large groups composed of 10-100 dolphins but sometimes gathers with other pods creating groups of thousands of individuals. The bonding of this species is remarkable as they never leave a member of its pod alone if it is sick or unable to move.

Everyone has a unique sound that helps them identify with others. It’s like a personal name. The younger ones communicate by touching the mother’s body with their pectoral flippers.

It is also a very playful dolphin with the ability to jump, ride the bow waves and perform acrobatic spins.

The Pacific white-sided dolphin has a polygamous reproduction system, and mates with multiple partners throughout its 37-46 years of long life. Sexual maturity comes when individuals reach 1.7 or 1.8 meters in length, i.e., between 5 and six years in females and between 8 and ten years in the case of males.

The seasons with more mating and births are spring and summer, respectively. The gestation period lasts about 11 or 12 months, and the only offspring is born with a weight of 15 kilos and a length of 1-1.2 meters.

The interval between each delivery is long. A female can have one offspring every 2, 3 or even every 4.6 years.

This species has a conservation status of “Least Concern” on the Red List of the International Union for the Conservation of Nature, but it is not free of the usual threats. In nature, they are possible victims of killer whales and sharks, but as usual human activities are the greatest threat to their survival.

Bycatch tolls numerous victims each year. Between 1978 and 1990, between 49,000 and 80,000, Pacific white-sided dolphins died trapped in nets, but the numbers have fallen. Still, on Japanese coasts, some fishers capture this dolphin, and this is not precisely incidental. Every year around 8,000 to 10,000 dolphins die because of intentional catch.

The Pacific white-sided dolphin is protected by the Marine Mammal Protection Act of 1972.

Thanks to the United Nations Organization’s ban on various types of fishing nets, bycatch is reducing.