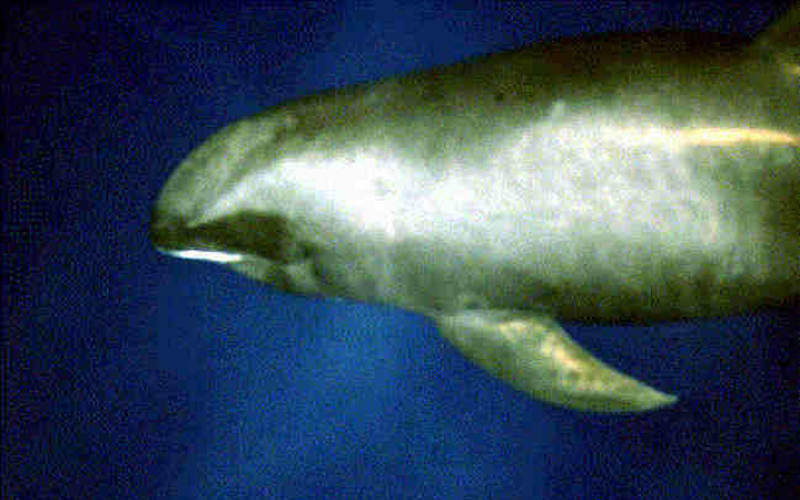 Interesting name, isn’t it? This curious-looking dolphin is very little known as it inhabits deep waters away from the coasts. It is a close relative of the pygmy killer whale (Feresa attenuata) and the Pilot whales (Genus Globicephala), a fact that is evident just by looking at its physical appearance. It is also known as the melon whale, electra dolphin, and many-toothed blackfish.

John Edward Gray described it in 1846 and gave it the scientific name Lagenorhynchus electra. Its binomial name changed recently adding the word Peponocephala.

The melon-headed whale looks very similar to the pygmy killer whale, so it is important to know the external features of this species to differentiate both dolphins.

Morphology.
It has a thin, elongated torpedo-shaped body, but stylized. The head is conical and with a rounded melon. Its head lacks a snout, but instead, it is curved at the top and pointed at the front. However females, and young individuals sometimes develop a small but undefined snout.

It has long pectoral flippers that correspond up to 20 percent of the total length of its body, with a curved and pointed shape. For its part, the dorsal fin is curved and has a sickle shape. It features a long tail at the end of its body; Some mature males may develop a keel in the belly.

Weight and size.
Males and females have similar size, but the latter can grow a few more centimeters. Thus, the length of adults is about 3 meters. The weight of both genders reaches up to 200 kilograms.

Skin Coloration.
It has a dark gray or charcoal black skin color with a darker part extended under the dorsal fin. A white spot borders the urogenital zone, the same color that surrounds the lips. In contrast, the eyes have black spots on them that resemble a mask on the face.

Distinctive characteristics.
Seen from above, the melon-headed whale has the head more triangular than its relatives, and it also lacks the saddle-like dorsal spots like the others.

It dwells in tropical and subtropical waters of the Atlantic Ocean, Pacific Ocean, and the Indian Ocean. Its habitat ranges from latitude 40° north to 35° south and includes the Gulf of Mexico, the Bay of Bengal, the South China Sea, the Arabian Sea and the Timor Sea.

It inhabits areas of considerable depth on the continental shelf and around oceanic islands, in waters with temperatures above 25° C.

The melon-headed whale regularly eats small fish and cephalopods, especially squid. From time to time it also adds crustaceans to its carnivorous diet.

It looks for its preys in waters of moderate depth. A conventional method to hunt is:
1) Detect a potential prey,
2) Chase it and guide it to the surface and
3) Capture it on the surface of the water and then eat it.

The species has a sexual maturity late in life since males reach maturity at 15-16.5 years and females at 11.5 years old, this is when they reach about 2.34-2.45 meters in length.

The gestation period lasts around 12 months, and females have only one offspring. There is not reliable information about other breeding information of this species, such as a possible season for mating and birth. However, researchers noted that in high latitudes most births occur in July and August while in Low latitudes they occur during the spring months.

The females give birth every 2 or 3 years and the calves born weighing 10-15 kilograms.

The melon-headed whale is sociable by nature. Their pods are very numerous made up of 100-500 individuals, although some of them include up to 2000 dolphins. The links between members of the pods are very close, and cooperation is common to catch prey. They sometimes associate with other cetacean species such as Fraser’s dolphins (Lagenodelphis hosei), spinner dolphins (Stenella longirostris), Atlantic spotted dolphins (Stenella frontalis) and Short-finned pilot whales (Globicephala macrorhynchus).

The dolphins in the pod travel very close to each other and can form smaller groups within the same pod. In some regions (Australia, Brazil, Seychelles, Japan, Costa Rica, among others) frequently a significant number of them become stranded, a fact that can demonstrate the degree of social connection and therefore, segregation.

The melon-headed whale is fast when swimming individually, but the pod has a smaller speed, and they can move keeping the head out of the water. Their acrobatics are not famous, but those living at low latitudes can jump out of the water more frequently.

The Melon-headed whale has a conservation status of “Minor Concern” on the red list of the International Union for the Conservation of Nature. Despite this, its survival is threatened by three main dangers:

Bycatch.
Many purse seines and gillnets trap many melon-headed whales in the eastern Pacific Ocean.

Hunting.
The numbers are not conclusive, but sometimes these dolphins are intentionally caught, some of them to take to water parks.

Pollution and degradation of their habitat.
Their habitat is affected by pollution and chemicals that penetrate their body tissues. Climate change is a potential danger as water properties change, but the effects on this cetacean are not yet clear.

This cetacean is in Appendix II of CITES (Convention on International Trade in Endangered Species of Fauna and Flora) which includes species whose international trade must be regulated. No other conservation strategies are known.