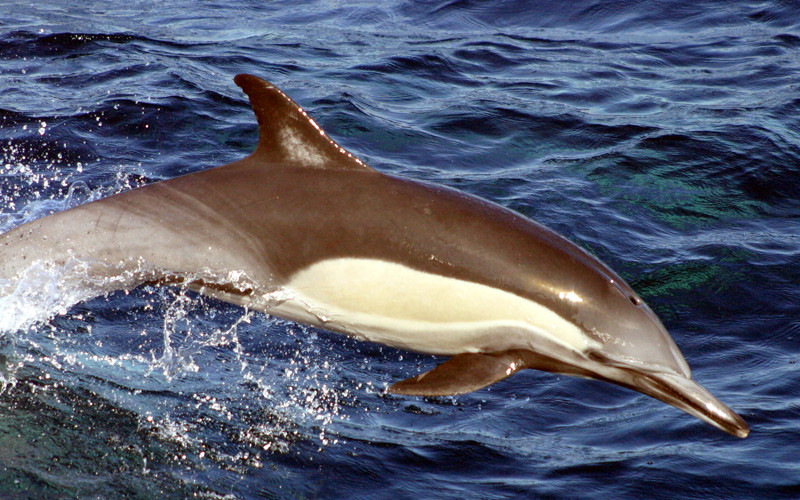 It is one of the two species of common dolphins that belong to the genus Delphinus. Therefore it has a similar appearance to the short-beaked common dolphin (Delphinus delphis), and they were considered part of the same species until the mid-1990s when they were separated and recognized Delphinus capensis as a different species.

If a person is on the high seas, it ‘s hard to distinguish this species from Delphinus delphis, but the former dolphin has a longer and thinner snout than the latter.

Weight and size.
It is a medium-sized dolphin with a length estimated between 1.9 and 2.5 meters being the males slightly larger than the females. In average, individuals can weight between 80 and 235 kilograms but usually not more than 150 kilos.

Morphology.
The shape of its body is fusiform but robust. In the center of the dorsum, it has a curved dorsal fin. Its head is less rounded than other species since the melon rises from the snout at a small angle.

Skin Coloration.
It has a coloring pattern that extends from the sides of the body to the dorsal fin. The upper area is dark, the lower is white, and both pectoral flippers have the same dark color of the top. The dark color can be dark gray or dark brown, while the light color can be white or light yellow.

The Long-beaked common dolphin inhabits specific areas of the Atlantic, Indian and Pacific Oceans. It is possible to find it from the west coast of the United States to Baja California in Mexico. There are also populations in Mexico, Peru, Chile, Venezuela, Brazil, Argentina, West Africa, South Africa, Madagascar, the Arabian Peninsula, India, Indonesia, China, South Korea and southern Japan.

The subspecies Delphinus capensis capensis dwells on the east coast of South America, western Africa, southern Japan, Korea, northern Taiwan, South Africa, and California in the United States to Peru. Delphinus capensis tropicalis lives in the Indo-Pacific up to the Gulf of Thailand.

The Long-beaked common dolphin typically prefers temperate water habitats about 180 kilometers away from the coasts on the continental shelf, at lower depths than Delphinus delphis. It does not usually congregate around the oceanic islands and do not inhabit the high seas.

The Long-beaked common dolphin has a carnivorous diet abundant in small fish, cephalopods, and crustaceans. In the north of the Gulf of California, this dolphin gathers with others of the same species forming pods of tens to thousands of individuals, and cooperate to catch prey. What they do is chasing and herding large schools of fish, and when they become disoriented, they keep the school together to expedite its consumption.

The above involves submerging at about 280 meters deep for a maximum of 8 minutes before surfacing to get oxygen. Their hunting and feeding activities occur near the coasts, in shallow waters. Some of its habitual prey are:

Although group hunting is well-known in the Gulf of California, most think that something similar happens in other regions where this dolphin lives.

The Long-beaked common dolphin reaches sexual maturity when the specimen exceeds 2 meters in length, but the age at which it occurs varies according to the geographic region in which the dolphin lives. In males can happen between 2 and seven years and in females between 3 and 12 years.

Mothers give birth every 2 or 3 years. After mating, usually during the spring and autumn months, females have a gestation period of 9-11 months after which one single offspring is born with a weight of approximately 10 kilograms and a length of 0.8-1.0 meters as well as a coloration less dark than that of adults. The mother weans the baby about six months after birth.

It is interesting to know that captive individuals of this species have successfully mated with bottlenose dolphins, resulting in hybrid offspring capable of reproducing. This species lives in the wild about 22 years.

Delphinus capensis is one of the most gregarious animals in existence, and its pods are made up of hundreds or thousands of individuals that may organize into smaller groups of about 10-30 members according to age and gender. Sometimes they swim along with other cetaceans such as pilot whales (Globicephala).

These dolphins are socially active, very energetic and even curious as they approach the boats and stay close to them for a long time. They are fast swimmers and perform various types of acrobatics, among them, riding the bow waves of boats and jumping out of the water; They also whistle with their heads out of the water.

This species has a conservation status as “Data Deficient” in the Red List of the International Union for the Conservation of Nature (IUCN). It is sometimes intentionally hunted (sometimes harpooned) in Japan, northern Venezuela, areas of the Caribbean, Peru, and West Africa to get their meat for human consumption or as bait. Other direct catches are to get them for aquariums or parks.

Bycatch is probably the greatest threat to their survival. In China, Southern California and other parts of the tropical eastern Pacific, it is frequent their entanglement in gillnets, driftnets, and trawl nets.

On the other hand, pollution also threatens their survival. According to researchers, they found remains of organochlorines in their fat.

The good part of this scenario is that the species is under the protection of the Marine Mammal Protection Act of 1972, which applies measures that prevent dolphin degradation.