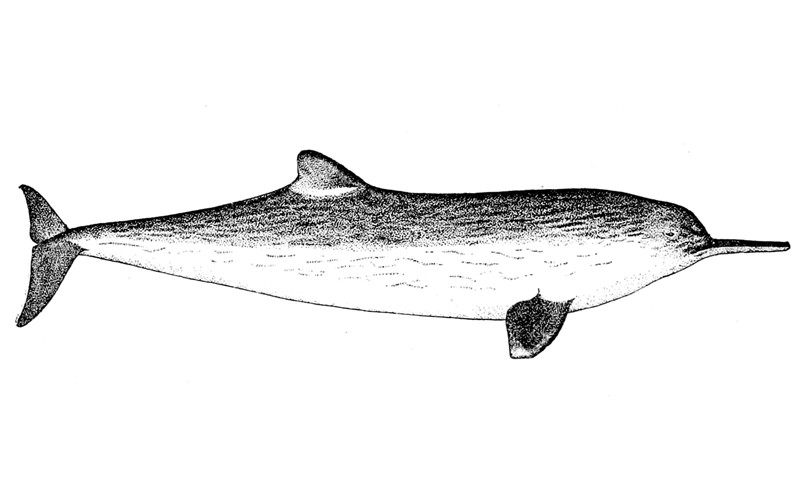 It is one of the smallest dolphins in the world and curiously, although it is a member of the group of river dolphins, it does not live exclusively in freshwater. This dolphin was described initially in 1844. Also known with the name of Franciscana dolphin, it is the only member of its family.

This dolphin rivals Hector’s dolphin (Cephalorhynchus hectori) for the title of the “smallest dolphin in the world, ” but the individuals of this species have slightly larger dimensions.

Weight and size.
La Plata dolphin females grow faster than males, and the former are also larger than the latter when adults. A female length is around 1.8 meters; The male is only 1.6 meters. Other estimates indicate that females and males can be as small as 80 and 76 centimeters, respectively. The weight is around 50 kilograms.

Morphology.
From their small body stands a large beak and a big head with symmetric facial skull and a rounded forehead. Their fused vertebrae provide a very flexible neck. Just above the fold of the neck is the blowhole which has a semilunar shape and several centimeters further back appears a medium-sized dorsal fin, with a triangular shape and a rounded tip. They have flattened pectoral flippers, where small ridges protrude in males when they reach adulthood.

Skin Coloration.
The color of the dorsal area (top) is usually gray or brownish. The belly is white. Young specimens tend to be browner than adults, and they have seven hairs on the upper jaw.

Distinctive characteristics.
Its narrow beak is the most outstanding feature as it has the largest ratio of all cetaceans when comparing its body size against its beak.

It is distributed only along the eastern South American coasts of the Atlantic Ocean from Brazil to Argentina, passing through Uruguay in tropical and temperate waters. It inhabits from the north of the San Matías Gulf in Argentina to the state of Espírito Santo in southeast Brazil. This range is misleading because the species is not evenly distributed in it but is absent in some areas.

It lives about 55 kilometers from the coasts in murky and shallow ocean waters with depths ranging from 6 to 35 meters, but they venture into brackish estuaries. Tides have a significant influence on their habitats.

It consumes a wide variety of pelagic and demersal fish, as well as cephalopods and crustaceans. It is, therefore, a carnivorous animal whose teeth serve to hold the prey, including shrimp and squid.

Most of their prey have lengths around 10 centimeters, but they can consume everything that fits into their mouth. Their favorite prey is:

This dolphin spends a lot of time looking for food during the high tide and displays cooperative hunting techniques in which all members of a group help to catch food.

The La Plata dolphin is a diurnal cetacean which performs its principal activities during the day. Although it is sociable as many other dolphins, their pods are composed of 2-15 individuals but can be as many as 20 or 40. The social structure is possibly matriarchal, that is when an adult female lead the pod and the groups are made up of individuals related to each other.

It is not common to spot this dolphin, and its movements are regularly slow: its speed when swimming is 0.09-1.8 meters per second. If the tide is low, it travels with the members of its pod.

Females have one offspring each year between October and January after a mating usually between January and February. These times indicate that the gestation period lasts 10.5-11.2 months.

The calf spends a lot of time with its mother and for a time is fed only with breast milk. At 8-9 months of age is weaned, when it measures about 105 centimeters in length.

The La Plata dolphin has a conservation status of “Vulnerable” according to the classification of the Red List of the International Union for the Conservation of Nature (IUCN). This situation is the result of bycatch in gillnets, the contamination of their habitat and the noise pollution. Its high mortality is, therefore, a consequence of human activities, and 500-800 individuals of this species die every year.

La Plata dolphin is in Appendix II of the Convention on International Trade in Endangered Species of Wild Fauna and Flora (CITES), which lists species whose trade requires strict regulation.