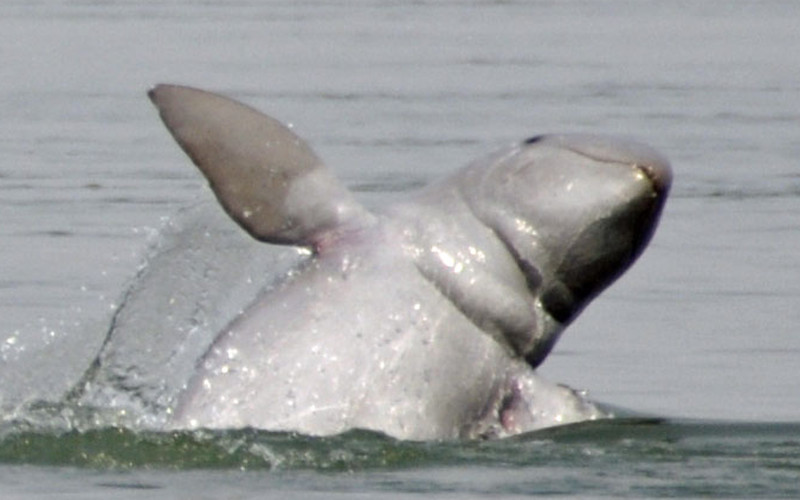 Author of the picture: Dan Koehl.

The Irrawaddy river dolphin is a species that belong to the group of oceanic dolphins. Paradoxically, it is not a dolphin exclusively of freshwater. It is closely related to the Orca (Orcinus orca), and it is one of the most threatened extant dolphins.

In Laos, the inhabitants have the belief that humans can reincarnate in these dolphins.

The Irrawaddy dolphin is a singular-looking dolphin, whose body differs from the stereotype of the best-known dolphins. Physically it is similar to the beluga whale (Delphinapterus leucas), another toothed cetacean and marine mammal.

Weight and size.
The species exhibits sexual dimorphism since the male tends to be larger and heavier than the female. An adult has a weight of approximately 130 kilograms and a length of 2.3 meters.

Morphology.
The body of this dolphin is very robust. It has a rounded head and a very bulging forehead that extends from above the mouth. Its dorsal fin at the back end is small and has a triangle shape while the pectoral flippers are long, wide and also triangular. It has no heart sphincter, and as with other dolphins, its stomach splits into several compartments.

Skin Coloration.
The skin in the dorsum and the sides has a blue or gray color, but the color in the ventral area is slightly lighter as well as in the last part of the back.

Distinctive Characteristics.
This dolphin lacks a beak, and since its neck is very flexible, it has wrinkles behind the head as a result of this capability.

The Irrawaddy dolphin thrives in tropical and subtropical waters of the Indo-Pacific region on and near shallow coastal waters. It inhabits Southeast Asia from Borneo and the islands of the Indonesian Archipelago to Papua New Guinea. Three subpopulations live in freshwater rivers:
– Ayeyarwady in Burma,
– Mahakam in Indonesia
– Mekong in Laos.

It inhabits coasts, rivers, estuaries, deltas and large lakes of its distribution zone, regularly near the mangroves. Almost all sightings have happened not more than 1.6 kilometers away from the coast and a less than 5 kilometers, and apparently, they do not usually live in deep waters.

It is a carnivorous cetacean that feeds on several species of cephalopods, fish, crustaceans and fish eggs. It establishes a strategy of cooperation in groups composed of 6-15 dolphins. To hunt, they can spit water to attract more fish and even hit large species with their lower jaw, perhaps in an attempt to play before eating.

In some regions of Asia these dolphins fish in cooperation with local fishers which call them, and surprisingly the dolphins come swimming in semicircles and hauling the fish to the surface. Thus both parties benefit since the dolphins feed themselves with the fish stunned or trapped in the edges of the boat.

There is not much information about the mating habits of the Irrawaddy dolphin. Individuals reach sexual maturity at around 3-9 years of age and the mating season is variable. For example, in the northern hemisphere dolphins mate from December to June and births occur between June and August.

The female delivers one single offspring after a gestation period of 14 months. Researchers assume that, just as in other species, males mate with and compete for several females.

At birth, the offspring weigh about 10 kilograms and measure about 1 meter. Six months later they are already able to consume fish, and after one year and a half, they are usually completely weaned.

This dolphin shows high sociability inside and outside its pod because its groups are composed of 5-57 members but also occasionally meet with other species of dolphins. The most common practice is that they live in small groups of 3 to 6 members.

This species makes slow movements and has less activity than other dolphins; it usually breathes taking out only the head out of the water. In the same way, they take a look around: with the head as the only visible point. However, it has been seen jumping, making bubbles and hitting the water with its flippers and tail.

Their territories cover about 35 kilometers in length. Individuals from eastern Borneo make daily migrations to the Mahakam River but always return to their area at night. For their part, those living in Indonesia move into the River tributaries at high tide and to the river when the tide is low.

There are no identified natural predators of this species, and only the humans represent a threat to them.

The low reproduction rate and the human-related threats contribute to the rapid decline of the Irrawaddy dolphin populations and the danger of extinction in some areas. There are no known natural predators of the species, so it is essential that the humans stop threatening this dolphin.

Individuals are often trapped in gillnets or die after dynamite explosions when fishers use such method. It is also gets electrocuted with nets used in electric fishing. To make things worse, water pollution and dam construction destroy and negatively modify their habitat and puts them in danger.

Fortunately, this dolphin under protection in Laos, Vietnam, and Cambodia, and Bangladesh, India, Laos, Malaysia, Burma, and Thailand banned its hunting. In fact, in Burma, there is a reserved area of about 74 kilometers of the river Ayeyarwady.

The Whale and Dolphin Conservation (WDC) organization dedicated to the conservation of whales, dolphins, and porpoises created an Operation Plan for the Conservation of the Irrawaddy Freshwater Dolphin Populations given the potential extinction problem in Southeast Asia.