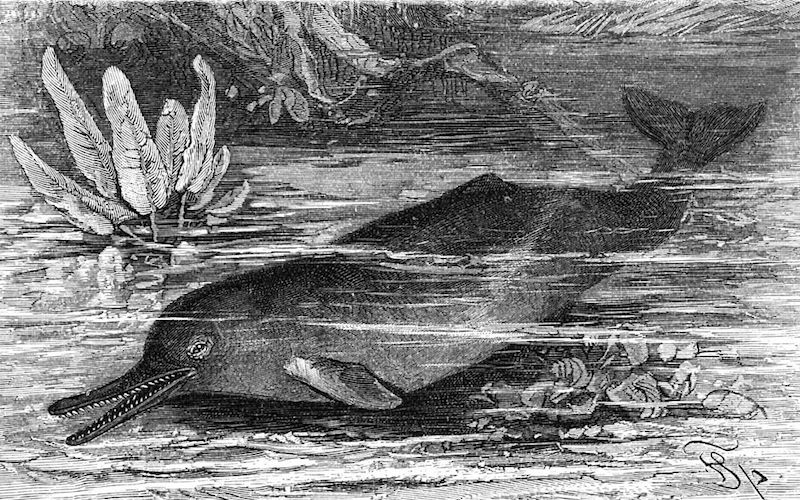 Author of the picture: Friedrich Specht. This work is in the public domain.

The Indus River dolphin, Indus blind dolphin or locally known in Pakistan as Bhulan, is one of two subspecies of the South Asian river dolphin (Platanista gangetica).

This toothed cetacean is closely related to the Ganges dolphin (Platanista gangetica gangetica), and with this dolphin, they form a small group of surviving dolphins belonging to a family of river cetaceans.

Despite its great physical resemblance to the Ganges River dolphin, this subspecies differs from the other by some physical characteristics.

Morphology.
It has a sturdy and fusiform body, with a long snout that is about 20 percent of the total length of its body. This structure is flattened and thin but broad at the tip and contains many large, visible teeth. It has large flippers and a wide but thin tail. Its flippers are approximately 18 percent of their body length.

Its dorsal fin is poorly developed and appears to have only a triangular crest or a hump on the back. It has a broad forehead that rises from the base of the snout. Its eyes are small and useless because it swims in muddy water, so it is blind, but this does not deter them from detecting prey with their echolocation sense.

Their teeth are visible even if their mouth is not open, they can insert and overlap other teeth, and those in the lower jaw are longer and curved.

Weight and size.
It has sexual dimorphism since females are larger than males. The latter have a length of approximately 2 to 2.2 meters and the former, 2.4 to 2.6 meters on average.

Skin Coloration.
Without a uniform coloration throughout its body, its skin usually has a brown or gray color that turns pink in the belly. The upper part of its body is darker than the bottom.

Distinctive characteristics.
Possibly its long snout is the most outstanding feature. When a female reaches sexual maturity, its snout abruptly grows until it is longer than that of the males.

The Indus River dolphin, as suggested by its name, inhabits the river of the same name in Pakistan, in an area of ​​690 kilometers. In the past, these cetaceans swam freely along the 3,500 kilometers of the river, but the problems associated with the growth of human population and its activities confined them to a small part of the river. There are populations between the dams of Sukkur, Guddu, Chashma and Taunsa.

It inhabits the deepest part of the river channel, at the confluences with other bodies of water, in shallow areas (about 30 meters) and at temperatures between 8 and 33° Celsius.

The Indo River dolphin has a carnivorous diet being fish the principal part of its food. Herring, common carp, Gobio, Mahseer fish, and catfish are some of the species included in the diet of Platanista gangetica minor. Additionally, this dolphin eats prawns, clams, and shrimp, consuming about 1 kg of food per day.

In the same way as oceanic dolphins, the Indo River dolphin uses echolocation to search for food, but this dolphin relies completely on this sense for this as it is practically blind. It submerges for 30 to 90 seconds and with the help of its long snout explores the riverbed trying to find something edible that is hiding between the rocks or in the mud. Sometimes, its feeding activities are carried out in coordinated groups.

It is a dolphin not commonly seen by humans and therefore, little studied. Evidently lonely, it swims alone or in small groups of 2 or 3 individuals in shallow waters. Like its relative the Ganges River dolphin (Platanista gangetica gangetica), it usually swims sidewards.

It uses its sense of echolocation to perceive its surroundings, to look for food and to communicate with its companions. In the latter case, it emits constant vocalizations of 15 to 150 kilohertz and receives sounds in the form of periodic pulses.

Males and females can mate at any time of the year, and they do not have a specific breeding season. Both reach sexual maturity between six and ten years of age or until they reach a length equal or greater than 1.7 meters.

Once they mate, the pregnant female waits up to 11 months, which is the maximum time that the gestation period of this species lasts, although it may be as short as eight months. After that, one calf is born with a length ranging between 0.7 and 0.9 meters, this is, almost half the size of the mother.

The information about their reproductive habits is very scarce if compared with other species because aspects such as courtship or breeding are not exactly known. The maternal care extends for one year until the calf reaches that age. In the wild, its life expectancy is up to 30 years.

Something sorrowful is happening with the Indus River dolphin: There are only about 1,100 individuals left in the wild, mainly in the part of the Indus River in Pakistan, which makes this species one of the most threatened in the world. Why is this happening?

– Human development.
The construction of dams and dikes segments the populations reducing the mature individuals to mate, but it also reduces their habitat because they cannot move freely through these structures.

– Bycatch.
They commonly get trapped in gillnets, longlines or other fishing gear intended to catch fish.

– Direct hunting.
Some people kill them for their meat and oil or to use them as bait or even to prepare alternative medicines.

– Pollution.
Habitat contamination due to industrial, agricultural and domestic activities.

– River traffic.
The high traffic in the river cause collisions with the propels of boats that injure them severely.

According to the Red List of the International Union for Conservation of Nature (IUCN), this species is in danger of extinction (Endangered). The World Wide Fund for Nature (WWF) has been proactive and has developed strategies to rescue dolphins trapped in fishing gear; They share this task with the United Nations Development Programme.