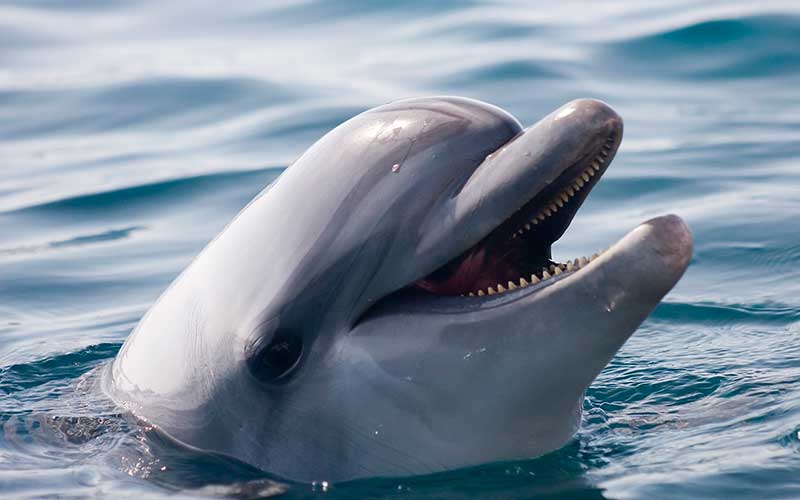 Further research found that this dolphin is even more related to the genus Stenella and the genus Delphinus than to the bottlenose dolphin, but there are no changes in its taxonomy yet.

The Indo-Pacific bottlenose dolphin has a similar physical resemblance to the common bottlenose dolphin. Both species have homodont denture and conical dental pieces with a diameter of 1 centimeter. Compared to other mammals, Tursiops aduncus has more red blood cells and 29 times more myoglobin (muscle protein).

Morphology.
It has a fusiform body, a large dorsal fin, small head, and face that narrows from the base. The length of its skull is shorter compared to the bottlenose dolphin.

Size and weight.
It is a small dolphin whose average length is 2.6 meters being males slightly larger than females. Its weight oscillates around 230 kilograms.

Skin Coloration.
The dorsal part of its body has a dark gray color that extends to the sides while the ventral region is whitish. Its pectoral flippers are also dark gray.

Distinctive characteristics.
One of the features that indicate that it is an Indo-Pacific dolphin is the presence of small spots in the ventral area in adults who are sexually mature although some individuals lack them.

The Indo-Pacific dolphin has a distribution in the tropics and subtropics of the Indo-Pacific as its name suggests. It inhabits from the west of South Africa to the southern part of Japan and the north, east and west of Australia including the Red Sea, the Persian Gulf, the Solomon Islands and the Indo-Malay Archipelago.

This dolphin inhabits areas near the shores within the continental shelf in waters with depths less than 300 meters and around the islands. Its habitat varies depending on the tides and the season but includes estuaries, coral reefs and surface waters at high seas, so it tolerates both saltwater and brackish water.

87 percent of their food is made up of about 50 species of fish.

Tursiops aduncus feeds on bony fish as well as cephalopods. A study of its feeding habits showed a preference for about 50 species of fish and three species of squid, that is, 87 percent of their diet is composed of the former, and 13 percent corresponds to these cephalopods. They also consume a minimum amount of crustaceans.

It commonly feeds alone although sometimes cooperates with other dolphins to obtain prey. To do this, they perform several dives for short intervals. If it is in very shallow waters it can a) drag the fish down and hit them against the sand with its tail or b) chase the prey to the surface to kill it and eat it.

Females reach sexual maturity a few years earlier than males. The former can start reproducing at seven years, but the latter begin up to nine years. Mating and births occur more frequently during the spring and summer months.

The males of these dolphins show a strange behavior in mammals: they build alliances by integrating groups of 2 or 3 members that allow an easier pairing with a particular female. On the other hand, single males tend to protect a pod of females.

The Indo-Pacific bottlenose dolphins are polygamous. A male knows that a female is already sexually mature when she shows spots on her skin. When they are ready, both copulate for a few seconds with the bellies united in the same direction.

The gestation period lasts about 12 months, after which a single calf is born that weighs between 9 and 21 kilograms and measures 0.8-1.1 meters in length. From the first seconds of life, the calf can swim following its mother. Calves are weaned when they are 2-8 years old, and mothers can get pregnant every four years.

Like most dolphins, it is a highly social species that groups with 5-15 peers, yet they are shyer than common bottlenose dolphins. Associations are formed according to size, age, and gender and can sometimes meet with other species of dolphins.

They are mostly diurnal and sedentary because they remain in their birth zones throughout their lives. They have a high learning ability, and it is not strange to see them playing. They have an excellent auditory capacity and emit a kind of individual whistles that identify them with the other members of the same pod or the same species.

Since it is used to live near the coasts, it is more susceptible to the dangers of human activities and their consequences: degradation of its habitat, direct hunting, and bycatch. Industries use parts of their body to market the meat and produce oils and lubricants. Also, they are common animals in aquariums, so they are the target of the tourism businesses.

To date, there is no information on its conservation status since the International Union for Conservation of Nature includes it in the category “Data Deficient.” There are no specific conservation strategies for this dolphin.