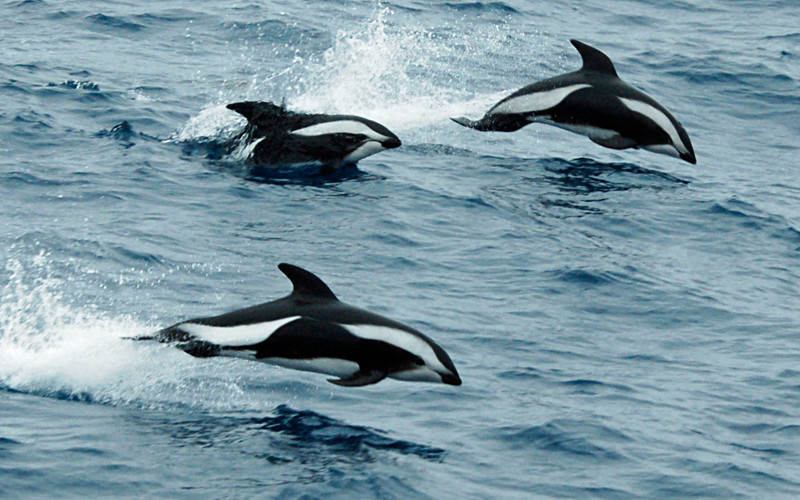 Photo by Lomvi2. This file is licensed under the Creative Commons Attribution-Share Alike 3.0 Unported license.

The world of toothed cetaceans is very vast. It contains large species, small species, unusual animals and beloved animals. The hourglass dolphin is one of the lesser-known dolphins, but it is an interesting one.

The hourglass dolphin is a cetacean rarely seen but described for the first time in 1824 from a drawing made in 1820. By 2010, only six complete specimens and parts of bodies from stranded dolphins had been in research labs. Some people call them by the nickname of “marine cow” because of the similarity of its coloration with the terrestrial cows.

Morphology.
The hourglass dolphin has a small, sturdy, plump-looking body. Its dorsal fin is large and curved backward and moderately high while its pectoral fins are broad and hooked in the case of individuals who have recently reached sexual maturity.

Weight and size.
The records of the dolphin’s dimensions are still inconclusive, but they suggest that males may be larger than females. The length of adults is on average 1.8 meters and their weight 90-120 kilograms.

Skin Coloration.
The skin of the dolphin is black and white. The coloring pattern of its skin looks like an hourglass, so from this comes its colloquial name: Hourglass dolphin. The dorsal area is entirely black, but the color is interrupted on the sides of the body, which have a white patch that starts at the head, narrows near the dorsal fin, continues backward and ends near the tail. Under this white part, there is a black band that reaches the pectoral flippers and the caudal fin. The ventral area is white, and the beak is black.

Distinctive characteristics.
The hourglass dolphin is easy to identify because of its unique hourglass-shaped pattern.

This species inhabits southern waters between the latitudes 45° south to 68° south, frequently near the Antarctic convergence. In fact, it is has a circumpolar distribution in the Antarctic region between South America and the Macquarie Island and around the province of Tierra del Fuego. The furthest sighting, in the north, occurred near Chile.

Their habitats are remote to humans. They typically dwell in deep waters and temperatures between -0.3 ° and 13° Celsius. They rarely come to the coasts and occasionally visit shallow waters.

Fish, crustaceans, and cephalopods make up the Lagenorhynchus cruciger diet. If it consumes fish, it prefers lanternfish (myctophids) mainly the species Krefftichtys andersonii. If they consume squid, their favorites are those of the Onychoteuthidae and Enoploteuthidae families. Observations indicate that they like to approach plankton concentrations and partner with seabirds.

It uses its sense of echolocation to detect prey. To do it, these dolphins emit acuter sounds than those of other species of dolphins, especially clicks, so that they can find prey from farther distances.

It is a social dolphin although its pods have few members: usually, they do not exceed 6 or 8 members, still sometimes they form groups of about 60 individuals. It associates with other cetaceans such as the fin whale (Balaenoptera physalus), the Minke whale (Balaenoptera acutorostrata) and the Southern bottlenose whale (Planifrons Hyperoodon).

The hourglass dolphin swims at a speed of 22 kilometers per hour and is an energetic acrobat of the seas. It is very curious and is not afraid to approach boats, that is why they usually ride the bow waves of boats and jump out of the water enthusiastically.

During the summer months, it is frequent to see hourglass dolphins in the waters of the south. Therefore it probably makes seasonal migrations following the cold currents.

Based on the reproductive processes of other species closely related to the hourglass dolphin and some observations, information about their breeding habits is known.

The age at which they reach sexual maturity is still unknown. Most births occur between August and October, the months corresponding to the Antarctic winter. The gestation period is about 12-18 months, and at birth, the calf is approximately 90-125 centimeters long.
Breastfeeding can last up to 2 or 2 ½ years, as in other dolphins.

It is one of the few species of cetaceans that is not vulnerable because of human activities, and this is thanks to the location of its habitat far from civilization. However, their biggest anthropogenic threat could be global warming.

It is likely that the populations of this dolphin are almost intact since they have never been under a systematic hunting as most cetacean species.

For some conservation organizations, this panorama does not mean that they do not need protection, therefore CITES (Convention on International Trade in Endangered Species of Wild Fauna and Flora) has included it in Appendix II of species whose trade must be under supervision. Their conservation status in the Red List of the International Union for the Conservation of Nature is “Least Concern.”