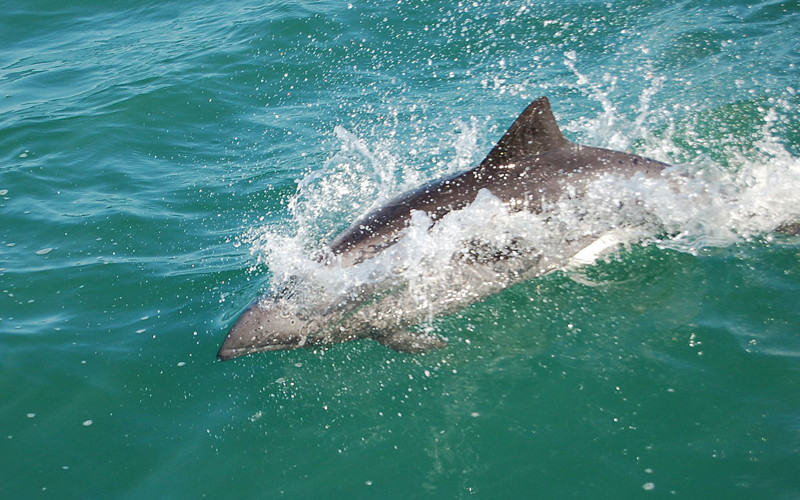 Photo by Joachim Huber from Switzerland. This file is licensed under the Creative Commons Attribution-Share Alike 2.0 Generic license.

It is important to know that from this perspective, the correct name of this dolphin would be “Haviside’s dolphin” since that is the proper spelling of the captain’s name. But his name was confused with that of another person whose name was Heaviside, and this one has lasted until the present time.

Morphology.
The Heaviside’s Dolphin has a fusiform, compact and robust body. It has a conical head and a short beak. Its dorsal fin is high, triangle-shaped and pointed, while its pectoral flippers are broad and rounded.

Weight and size.
There is no reported sexual dimorphism, so both genders have similar dimensions. The length of adults is on average 1.8 meters, and the weight is about 75 kilograms.

Skin Coloration.
It has a complex coloring pattern because its skin has different colors. The dorsal area is dark gray with a bluish-black spot that starts from the blowhole, between the dorsal fin and the beak, and extends towards the back side and the caudal fin. The belly and neck are white, and the pectoral fins are dark.

Distinctive characteristics.
The unique color pattern of this dolphin is enough to distinguish this species from others.

It has a small distribution only in the southwest of the African continent, from latitude 17° south to the southern end of Africa. Its range begins approximately from the center of Angola and is present in Namibia and South Africa and the Cape of Good Hope. It is present only in these countries.

It inhabits shallow coastal waters with less than 100 meters deep, but individuals have been reported swimming in waters with depths of about 180 meters. It is common to see it in shoal areas. Their habitats have a temperature that is around 9° to 15° C and at most, 19° Celsius.

Its coastal habitat provides the Heaviside’s dolphin with a large variety of foods to consume. As a carnivore, it has a diet in which fish, cephalopods, and some benthic organisms are present.

Almost 50 percent of its diet consists of hake (Order Gadiformes) and fish of the species Genypterus capensis, and 22 percent is made up of octopus. Other preys are gobies (Sufftogobius bibarbatus), silversides (Order Atheriniformes) and squids (Loligo rejnaudi).

Thanks to its fast swimming speed, it can catch prey with high efficiency. If it is a benthic animal, this dolphin waits for the night when the victims ascend to the surface, follow them and take them by surprise. In the case of pelagic species, it is enough to search on the sea surface and near the continental shelf.

Although they are social dolphins, their pods are small when compared to other species of dolphins. Groups of 2 or 3 individuals are standard and pods comprised of less than ten members. The groups of about 30 dolphins are not usual, and 10 percent of their composition is equivalent to young individuals. It is not very rare to see Heaviside’s dolphin without any company.

It is not a species that stands out for its acrobatics but has been seen riding the bow waves of the boats, jump to a height of more than 2 meters, hit the flippers against the water, approach timidly to the ships and even follow them during some hours. Other individuals prefer to stay close to their home or avoid getting away from their habitat.

It is a diurnal dolphin of activities carried out according to the movement patterns of its prey, that is why during the night it goes or stays on the surface to feed on the benthic species that ascend. Their day to day life consists in socializing, resting and avoiding their predators.

The males are believed to reach sexual maturity between the ages of 6 and nine while females at six years old usually have their first offspring, so their sexual maturity is around 5-9 years of age.

The females of this species deliver a single offspring every two or four years. A couple may mate sometime during the spring or summer and the pregnant female waits a gestation period of ten months to see her calf, which initially measures about 85 centimeters in length.

The bond between the mother and its offspring is very tight, and the calf usually swims close to her. The relationship lasts about three years.

Having a coastal habitat makes this species very sensitive to human activities. About 100 Heaviside’s dolphins are killed each year by harpoons, apparently for food. Bycatch with fishing nets and contamination of their habitat with toxic substances, in addition to collision with boats, are other threats to the species.

This dolphin is classified as “Data Deficient” on the Red List of the IUCN (International Union for the Conservation of Nature) which does not mean that is not in danger, only that the organization does not have enough data to assess its conservation status.

On the other hand, it is in Appendix II of the Convention on International Trade in Endangered Species of Wild Fauna and Flora (CITES); This means that although it is not in danger of extinction, its survival is in jeopardy if there are not any control on the activities related to its trade.