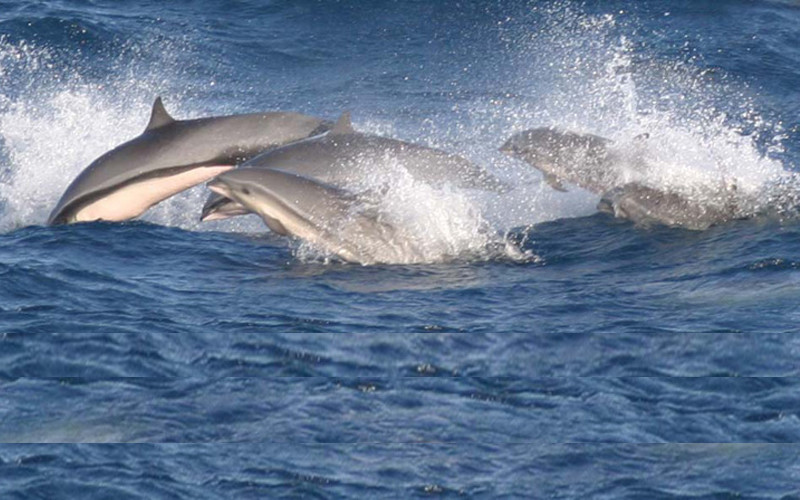 It is one of the most recently recognized cetaceans. The Fraser’s dolphin was scientifically described for the first time in 1956 Although the first specimen analyzed was in Borneo in 1895. During the first half of the twentieth century, the knowledge about this species came only from some bones until 1971 when scientist rediscovered the species thanks to the sighting of a live specimen in 1970.

The name of this dolphin is in honor of Francis Fraser, its discoverer in 1956.

This little-known dolphin is a medium-sized cetacean with a very distinctive appearance.

Weight and size.
The adult male is slightly larger than the female, so there is sexual dimorphism in the species. While females reach a maximum length of 2.6 meters, males can reach up to 2.7 meters in length. It weighs about 200 kilograms.

Morphology.
The Fraser’s dolphin body is robust and fusiform, with a postanal hump and a small beak. The pectoral flippers and the flukes of the caudal fin are triangular and pointy. The dorsal fin located in the middle of the dorsum is small, triangular and slightly curved.

Skin Coloration.
The color pattern of its body is unique to this species although it has a stripe that starts in the eyes and ends towards the anus present in other species. This band is very visible in young specimens, and it gets darker when the dolphin is older. It varies according to the habitat and the gender, and is similar to a raccoon “mask.”

The background color of the skin is bluish gray in the upper dorsal area and white or light pink in the lower ventral region.

Distinctive characteristics.
Along the lower jaw begins another light stripe that extends to the sides of the body.

It has a pantropical distribution (tropical regions of all the continents). The Fraser’s dolphin dwells between the latitudes 30° north and 30° south in the Pacific, Atlantic, and Indian oceans but it reaches places outside of its range of distribution in Australia, France, Scotland, and Uruguay, perhaps due to climate change.

It inhabits tropical and subtropical waters with depths greater than 1,000 meters in areas near the coasts, or areas of the continental shelf.

Their diet is composed of mesopelagic fish, cuttlefish, squid and shrimp. It prefers to feed in deep areas (250-500 meters deep) and very rarely on the surface, so their food can also be benthic. It always looks for the biggest prey available.

Both genders reach sexual maturity at about seven years of age, but possibly females can be mature a little earlier. This cetacean is polygamous, and the mothers can give birth once every two years.

Mating appears to occur during the summer months. There is no knowledge about possible courtship processes among the couple. The gestation period lasts between 10 and 12.5 months, after which the female gives birth in spring or summer to a single offspring that measures about 1 meter in length.

The life expectancy of this dolphin is approximately 16 or 17 years although in Japan an individual of 17 years and a half was found.

It is a marine mammal that shows high sociability. The pods of this dolphin are made of 10 to 100 individuals, and sometimes they create larger groups up to 1,000 dolphins. They have no problem in associating with other species of dolphins or cetaceans, such as the melon-headed whale (Peponocephala electra) and the Short-finned pilot whale (Globicephala macrorhynchus). Seagulls can also associate with this dolphin to feed themselves.

The pods move fast, and a single Fraser’s dolphin swims in a manner described as “ostentatious” and “aggressive,” leaving a trail of foam in its wake. Pods seldom follow boats and may be timid and playful although in some areas they prove to be more accessible.

This species has a conservation status as “Least Concern” on the Red List of the International Union for the Conservation of Nature (IUCN). However, it continually faces the danger of bycatch. In the eastern Pacific Ocean, this dolphin often gets entangled in nets targeting tuna, but in regions near the Philippines, more than 800 dolphins are captured annually to use their meat or as bait for other species.

This dolphin does not have any known natural predator, but some think that killer whales and sharks can attack them, as in the case of other cetaceans.

Despite the threats, Fraser’s dolphins are still abundant in their range of distribution. There are no specific research or conservation strategies, but the species is in Appendix II of CITES, in the group of species which its commercial fishing requires control.