Commercial fishing can be a risky business, but not when you have the right members on your team! In some locations, fishermen are getting help from self-trained Bottlenose Dolphins! This is a winning outcome for the dolphins as well as for the fishermen that are reaping such rewards. What is really interesting in this study in Brazil is that the dolphins were never formally trained for such an outcome.

What has occurred is that the dolphins are successful with getting the fish into a central location. Then they send out signals to the fishermen that inform them where they should drop their nets to catch the fish. It is very evident the social and cooperation skills of these dolphins are extremely well developed. 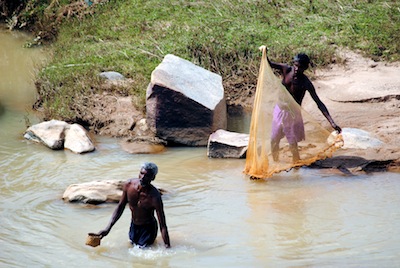 Additional research on these dolphins also shows they are extremely social and cooperative within the group. This is based on information that has been published in the Royal Society Biology Letters if you are interested in finding out more. It is believed that these factors help to explain why some of the dolphins in the wild do help humans and other don’t take part in it.

The behaviors are well synchronized and fishermen have been able to rely on those signals. They often include tail or head slaps in the water in given locations. The fishermen are able to quickly put their nets in the right place. This allows them to get the fish instead of guessing where to put the nets and hoping for the best. Such information has been observed and documented by Fabio Daura-Jorge of the Federal University of Santa Catarina.

Along with several colleagues, he has been able to see the outcome of such experiences. So what is in it for the dolphins? They get to dine on the fish that find their way out of the nets. They are patient and wait for that moment to arrive. Such observations were noted by Daura-Jorge and his team through boating surveys that took place over the course of a 2 year period.

They used photos to identify the dolphins. This allowed them to classify the groups as cooperative or non-cooperative based on their interactions or lack of interactions with the fishermen. The use of computer modeling allowed for the social relationships among the dolphins to be successfully identified.

What was found is that those dolphins that were cooperative spent far more time with each other, even when they weren’t participating in activities that helped the fishermen. It is believed that there are many factors at work here that determine if a relationship will occur naturally between humans and dolphins. They include genetics, social learning, and ecology.

It is believed that information transferred from one generation of the dolphins to the next is very important here. The older dolphins teach the younger ones to be able to successfully help the fishermen. There have been numerous documentations about such behaviors within groups of dolphins in various areas. One that is widely discussed is the process of sponging by the dolphins in Shark Bay, Australia. If you aren’t familiar with sponging, it is the process of these Bottlenose Dolphins tearing pieces of sponges and covering their snout with them while they forage for food. This protects them from damages to that part of the body.

There are plenty of unique behaviors identified within dolphin groups, and their intelligence level is believed to be a big part of them. According to Lori Marino from Emory University, the size of the dolphin’s brain should be used to help measure their intelligence. She and many others believe the dolphin ranks #2 – right being humans.