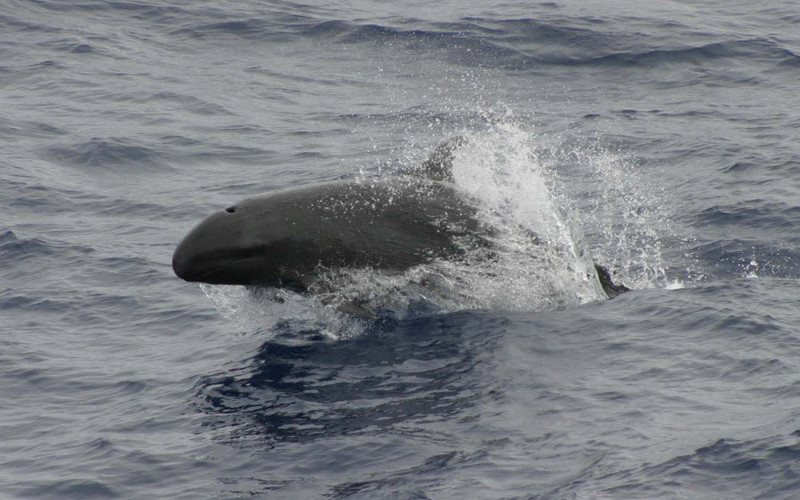 The false killer whale is the third largest dolphin in the world. A skeleton of this species discovered in 1843 in England was at that time the most preserved fossil of a cetacean. Owen was the first naturalist to describe it in the year 1846 and was named Phocaena crassidens. Incredibly, the fake orca was seen alive 15 years after the discovery of its skeleton.

While its current common name refers to the orca (Orcinus orca), this species and Pseudorca crassidens do not belong to the same genus and are not closely related. However, both species have similar features like the shape of the skull and the morphology of the dental pieces.

Morphology.
The shape of its body is fusiform. Slender and hydrodynamic, the false killer whale has a conical head which is devoid of a snout. Their narrow, pointed pectoral flippers have a sort of lump in the middle, so they look like elbows.

Weight and size.
The maximum length of females is approximately 5.1 meters while the largest males can measure up to 6.1 meters. Female weigh about 1,200 kilograms while males have a weight of up to 2,200 kg.

Skin Coloration.
The skin on its body is black or dark gray except for the whitish chest, and the faint light gray spots sprinkled around the neck and the head.

Distinctive characteristics.
Its elbow-shaped pectoral fins are the perfect feature to distinguish this dolphin quickly and easily from other species. The lack of snout and the almost full black color are also some unique features.

It is possible to find false killer whales in tropical and subtropical waters of the Pacific Ocean, the Atlantic Ocean, and the Indian Ocean. Its boundaries are latitude 50° north and 52° south, so it has a wide distribution in saltwater systems, including seas and semi-closed places such as bays.

In the south, it extends from New Zealand to Chile, Australia, Peru, South Africa, Argentina and even the United States, the Bay of Biscay, the Red Sea, the Mediterranean Sea, the Sea of ​​Japan, and British Columbia. Although there are no reports of populations living in countries close to the North Pole, sightings include places like Norway and Alaska, but they are probably lost individuals because they are not cold water residents.

It has a particular preference for waters with depths of approximately 2,000 meters. It rarely approaches the coasts, and when it does, it prefers to stay close to the oceanic islands and sometimes ventures into seas or closed water systems.

To hunt, a pod of 300 individuals can travel in a straight line spanning an area of ​​5 km.

The false killer whale is a carnivorous animal, but its prey is not only fish; it also includes crustaceans and cephalopods. Its size allows this dolphin to hunt some species of marine mammals successfully.

This kind of victim is common in waters of the eastern Pacific, where they have been seen attacking humpback whales calves (Megaptera novaeangliae). The following are just some of the preys that are part of its usual diet:

It feeds opportunistically in coordinated groups. To hunt, a pod of 300 individuals can travel in a straight line spanning an area of ​​about 5 kilometers. It usually captures a prey near the surface, shaking it violently until dismembering it and eliminates the skin before consuming it. An interesting detail: the false killer whales share their food with their pod companions and mothers allow their offspring to feed on the prey that are inside their mouths.

This cetacean presents a very evident gregarious behavior, and they establish close ties between them. However, their pods are made up of relatively few members, about 10-50 in general, but in some regions, the groups may be more or less numerous, reaching up to 100 individuals. When they swim together, some subdivisions within the group are visible.

Social relations are long and stable throughout their life, with a minimum duration of 15 years. In Scotland, Ceylon, Zanzibar and Great Britain, numerous strandings of these cetaceans have taken place to the point of counting 800 stranded individuals in dramatic cases. It is also a species that usually stays within a particular area. For example, false killer whales in Hawaii do not move more than 500 kilometers around their area.

The false killer whale performs some acrobatic jumps, including riding the bow waves of the boats and jumping out of the water. On the other hand, this dolphin communicates with its mates through whistles, squeals and pulsating sounds of frequencies above 100-130 kilohertz.

The false killer whale can mate throughout the year if the individual is already sexually mature. Females reach maturity between 8 and 11 years while males reach maturity at 8 to 10 years of age. Both are polygamous and have a very low reproduction rate because mothers have offspring only every seven years.

Mating occurs when a male detects receptivity of a female. If there is not conception in the first ovulation, the female keeps the ovulation until it is pregnant.

The gestation period lasts 11-12 months, and after that time the calf is born with a length of about 2 meters. The mother feeds the offspring for 18-24 months, after which it can consume solid foods.

Bycatch (mainly in Japan and Indonesia), reduction of prey availability, pollution of coastal waters and killing by fishers who consider it a competitor for fish, put this cetacean on a bad conservation perspective.

The number of individuals that exist is not known, in fact, the Red List of the International Union for Conservation of Nature does not have enough data to evaluate their conservation status.

Their inclusion in Appendix II of CITES (Convention on International Trade in Endangered Species of Wild Fauna and Flora) implies a better regulation for this species.