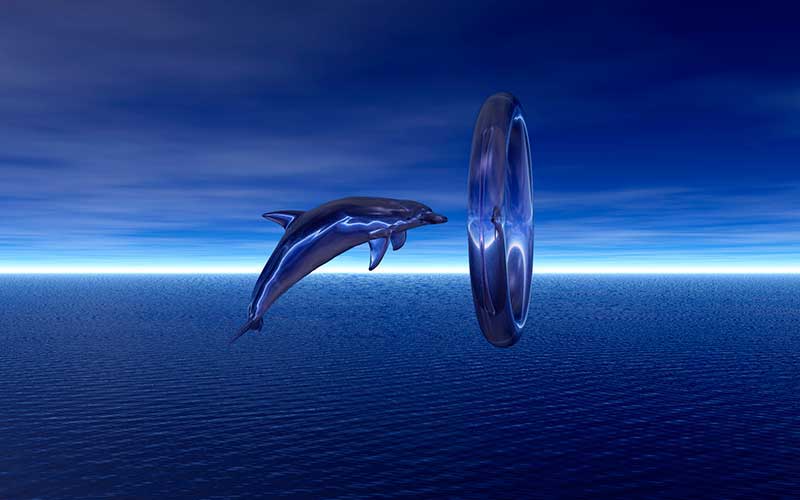 Dolphins inhabit all oceans of the world; therefore it is reasonable that they appear in many stories of civilizations that populated the continents long time ago. The most famous stories about dolphins mention how they rescued people from the dangers of the sea or how they helped fishers with their activities in return for some of the loot.

These stories are not so far from reality. But some others are fantastic tales related to alternate worlds, ancient legends, temperamental deities and curious anecdotes. All this created a mythology with several legends about these magnificent cetaceans.

THE DOLPHINS IN OLD GREECE

The men of ancient Greece had a collection of myths that survived until the present day. For the Greeks the concept of dolphins was positive, considering it a benevolent animal and its appearance in the wake of the boats as a good omen. Many coins from those times show the image of children, men or gods riding a dolphin.

Respect, admiration and affection: what dolphins have aroused in many human civilizations over time.

– Dolphins were the messengers of Poseidon, the god of the seas.

– Once, some pirates captured the god Bacchus or Dionysus who confused him with a Prince, with the intention to ask for ransom. Dionysus raged and turned the ship’s oars into snakes, which frightened the pirates and made them jump into the sea. However, the god had mercy on them and decided to turn them into dolphins so that from then on they would help men.

Probably this myth caused that many Greeks considered that killing a dolphin was a totally outrageous and reprehensible act.

– In the Hymn to Apollo, Homer, the poet, relates that the temple of this god was at the base of Mount Parnassus. In need of priests, he became a dolphin and hijacked a merchant ship, making the winds blow in a way that the ship headed for the Greek coast. The crew then stayed in the new temple and served as priests.

– Who is the child, that appears on Greek coins, which rides on the back of a dolphin?” Apparently, it is Taras, the son of Poseidon. According to the myth, his father sent a dolphin to save him from a shipwreck.

As Greeks associated dolphins with Poseidon, this probably explains why in all the depicts of the sea god is always surrounded by dolphins. In one myth about Poseidon, dolphin messengers were sent to bring him a nymph he loved, who he later married. As a reward, he set the dolphin in the sky as a constellation. And he was regularly accompanied by dolphins among other sea creatures.

Alos Greeks associated dolphins with romance. Aphrodite is often depicted with dolphins, riding them or being accompanied by them.

Dolphins, in Greek culture, were often rescuers of humans, probably because they like to bring things to the surface and, well, because there’s some real evidence that they do indeed purposely rescue people in danger.

DOLPHINS IN MYTHOLOGIES OF OTHER CULTURES

The Minoan civilization, an ancient culture which settled on the island of Crete in the Aegean Sea, represented the presence of dolphins in their culture. A sample of this is the fresco with dolphins found in the Palace of Knossos that until today remains almost unchanged.

Certainly, the Greek culture has an extensive repertoire of myths that have been passed down through generations, but dolphins have appeared in the histories of many other cultures. For example, in regions of Brazil and the Solomon Islands some parts of the body of dolphins are used for medicines and totems, and for the Hindus, the Ganges river dolphins (Platanista gangetica) have a relation with the god Ganga.

For the ancient Romans, dolphins were in charge of bringing the souls of the dead to the Islands of the Blessed; They related these animals to mystical processes of life, death, and resurrection. Even the Greeks associated these animals with the Assyrian goddess Atargatis, the deity of fertility and the underwater world.

The culture in the age of Christianity is not exempt from these stories either. It is believed that on one occasion St. Martin the hermit was tempted by a libertine woman, and seeing himself about to sin he threw himself into the sea and went to live on an uninhabited island. Some versions indicate that the saint was taken to the shore on the back of a dolphin and others mention that two dolphins transported him after a woman arrived on the island where he lived.

Respect, adoration, and affection are what dolphins have aroused in the human culture which is far more than just interest. Many of their myths agree with the image that is popularly known of them since they have rarely appeared as evil or dangerous beings in these stories. Certainly, dolphins will continue to be present in future stories.

Dolphins have been viewed as somehow magical for millennia by humans. They’re one of the only animals that appear to play, leaping out of the water and doing tricks, and the bottlenose dolphin even seems to grin widely at everything. It was inevitable that such a remarkable animal also generated fantastic mythology that extends through today.

This image of the dolphin continued in myth and legend as the world transformed around them. Byzantine sailors, Arab sailors, Chinese and European explorers, all had tales of dolphins rescuing sailors or ships in trouble. Dolphins could predict calm seas. And a ship accompanied by dolphins was sure to find safe harbor, fair weather, and following seas. It was terrible luck to harm a dolphin, which is evident in the tales of Pelorus Jack, a dolphin described in the late 19th century who guided ships through a particularly treacherous strait off the coast of Tasmania.

Jack would appear as ships neared the canal, and guide them through the safe parts of the water, leaving the ship once it was safely through. One day, a drunk passenger on one ship shot Jack, and of course, he fled. Weeks later, he reappeared to guide ships again, but would never guide that particular ship again. And ultimately, that ship did wreck on the rocks of the strait.

Today, in movies and literature, we have modern legends about dolphins. Almost any website or book about dolphins will speak of their incredible intelligence.

Marie-Claire Anne Beaulieu. The Sea as a Two-way Passage Between Life and Death in Greek Mythology. ProQuest, 2008.