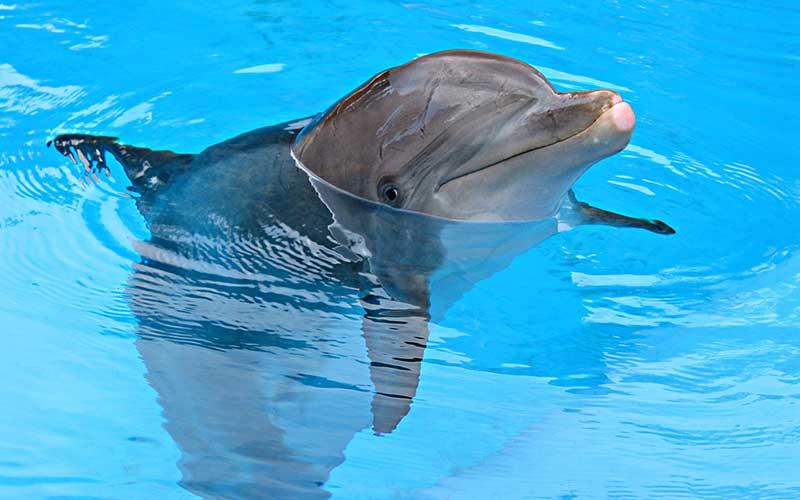 It is common to watch dolphins jumping through a hoop, spinning in the air, receiving fish from the coaches’ hands and swimming in a huge pond, which seems to be normal. However, the practice of keeping dolphins within an artificial habitat in a dolphinarium is relatively recent, as well as the information about the dangers that are exposed captive dolphins.

BACKGROUND OF DOLPHINS IN CAPTIVITY.

This practice goes back to the nineteenth century when in 1860 a pair of belugas whales (Delphinapterus leucas) were held in the Museum of New York. Although Belugas are not precisely dolphins, the event marked a before and after in the dolphinarium industry. Several years passed until in 1938 the Marine Studios opened a dolphinarium in Florida, with the business model as we know today, this is, the one in which an audience pay to see dolphins doing tricks, and at that time they began with a bottlenose dolphin (Tursiops truncatus).

Marine Studios of Florida, later became Marineland and it has the title of being the first dolphinarium in the world. In 2011 the Georgia Aquarium purchased the park.

When this park opened, people realized that dolphins were able to learn tricks and perform stunts if trained, so this created a whole new industry that grew over time, and many other dolphinariums opened to the public. By 1970, there were about 36 dolphinariums in the United Kingdom alone.

Keeping dolphins in captivity is a practice not approved by conservationists and animal rights protectors.

It is important to say that captive dolphins are not only in dolphinariums and water parks to amuse people who pay to see a show. Sometimes dolphins are there for the purpose of being studied or protected if they are in danger of extinction, but in any case, the practice involves certain risks often ignored by most people.

Within an artificial pond, dolphins usually have an infrastructure that resembles their habitat; The water must have an adequate depth depending on the species, and they must receive balanced food in a way similar to what they typically consume in the wild.

Dolphins also spend much of their time and energy learning tricks and coordinating their acrobatics to perform as a central attraction (in the case of dolphinariums) in exchange for food. In the same way, they can be trained to assist people suffering from congenital conditions like in the Dolphin Assisted Therapy (DAT).

Keeping dolphins (in fact, not just dolphins) in captivity is a practice not approved by conservationists and animal rights protectors. Captivity seems to be a kind of jail for an animal accustomed to freedom, having a social life interacting with hundreds of similar dolphins and behaving in a way that can not be entirely carried out in a reduced environment, regardless if the pond is quite large.

The dark side of captivity begins since the capture which has been described as “traumatizing” considering that hunters catch many dolphins since they are calves and separate them from their mothers in a stressful and even violent way. Later, they are transported in uncomfortable structures and taken to an unknown place for them. If you consider their close social ties and their memory capacity, the only conclusion is that for those captured dolphins the whole experience is a huge emotional shock.

The annual massacre carried out on Japanese shores is a brutal act, although local authorities have asked respect for this tradition. However, the water tinged with red provokes a significant rejection and indignation in the Western society. Some of the surviving dolphins, the youngest and strongest, are sometimes selected to be taken to water parks and work there as an attraction.

On the other hand, the research conducted while they are in captivity, although it can help to unravel aspects of their behavior and allow a better understanding of their life, it can have adverse effects on their health or include painful processes for them.

In the wild, dolphins travel several kilometers per day, live with their pod companions and other species of cetaceans and animals, emit sounds to communicate and capture their food alive. Living alone or only with a few mates in a dolphinarium limit their sophisticated social life which seems to be an important part of the dolphin life.

What do you think, should humans keep dolphins captive just because they can? Should we keep any animal at all? Is this a form of slavery? Mail us, and we will publish the interesting opinions.

Humans, have been capturing wild dolphins and even breeding them for a long time. Today even scientists and researchers keep dolphins in captivity for studying.

Dolphins, with their charmingly playful personality, breathtaking acrobatic ability, and affinity for humans, are among the most sought-after animals by people and their unique abilities are the subjects of research by those seeking to unlock the mysteries of their intelligence and communication.

But there is a dark side to keep dolphins in captivity because the methods used to catch wild dolphins disrupt pod populations and the capture process is hard on any dolphin; detached from the sea and their family, they are pulled into the harsh air where water doesn’t cushion their bodies. They experience trouble breathing, and their skin must be rubbed with lotion and doused with water so that it doesn’t dry out. In these conditions, they are transported for hours, unable to move, just to end in a tank filled with chlorinated water instead of the sea water.

Dolphins, seem reasonably resilient to captivity conditions. They accept humans and adapt well to being around them.

Around five thousand dolphins and other cetaceans have been caught for display, research, or military use over the last three decades. After some rather egregious abuses that led to dolphin deaths, the US and Canadian government now have strict controls over who may capture and keep a dolphin in captivity.

Although the laws covering US and European dolphinariums are quite strict and detailed, this has not always been the case; in many countries, lax regulations have led to filthy, inadequate tanks, sick dolphins, and the death and suffering of many specimens.