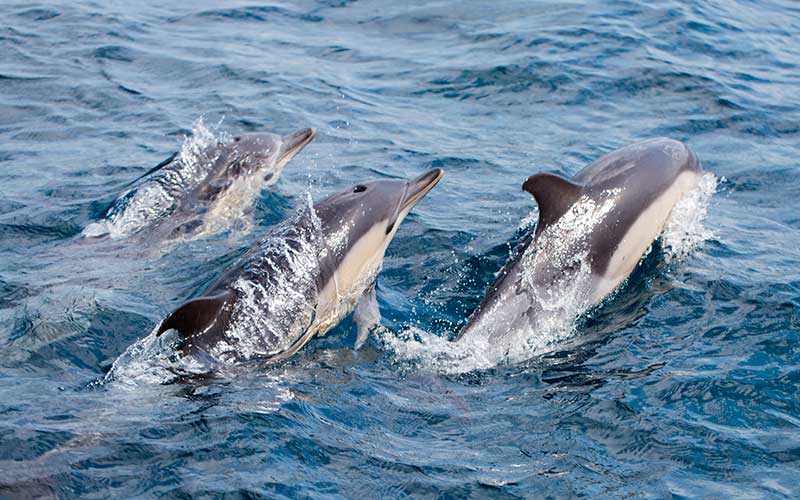 Dolphins are highly sociable mammals that establish close links with other individuals of the same species and even with dolphins of other species sometimes. They seem to show empathic, cooperative, and altruistic behaviors.

Most species live in groups called pods composed of 2 to 30 dolphins as the number varies, but in some areas with abundant food, many pods can merge forming superpods with more than 1,000 members.

Dolphins depend on this interaction for hunting, mating and defending themselves. In some cases, these superpods include more than one species of cetaceans that seem to interact well together.

Why do dolphins group? They have several reasons to join, besides following a sample learned since they born. Small dolphin species gather into multi-member pods as a way to compensate for their size when facing predators.

In this sense, these groups provide protection to an animal that does not have large jaws or razor sharp teeth. When Dolphins are together, it is easier for them to survive if they cooperate with each other, either through communication or intimidating the predator if it is a large number of individuals.

DYNAMIC OF THEIR SOCIAL STRUCTURES

It seems that dolphins are free spirits. Studying the dynamic of the social composition of the pods, scientists discovered that when dolphins belong to a group, nothing binds them to it in a matter of space and time, this means that they can move freely to different pods that are in their vicinity, then the movement of members is continuous.

This type of social network is flat and open, and scientists found no evidence of a rigid, closed or semi-closed structure, so dolphins do not have permanent “membership” in any pod.

These open associations are another indication of their high intelligence since these actions require a lot of brain capacity. Likewise, the hydrodynamic shape of their body supports the need to move continuously between several groups of different environments.

Even though pods do not lack social hierarchy, this depends on the species. For example, bottlenose dolphins (Tursiops truncatus) establish dominance biting, chasing and striking their tails or fins against the surface of the water. The marks of teeth remain in the skin of the dolphins and are practically in all the species meaning that confrontations are also part of their life. That is why, when they want to demonstrate “who rules here,” they may not be so charming as usual but more aggressive than we think.

On the other hand, the composition and structure of the groups depend on certain circumstances: age, sex, family ties, reproductive condition and even the history of associations. Studies on the behavior of dolphins indicate that dolphins can have preferences for meeting with particular individuals and that they can be remembered and recognized after experiencing extended periods of separation. Amazing, right?

The characteristics of the groups differ according to the number of members and the circumstances mentioned above. Dolphins do not behave the same when they change from one pod to another.

There are three types of pods:

Nursery groups (mothers-offspring).
A calf stays with its mother from birth up to a few years after weaning. Usually, the mother’s bond with her son is very close and continues until the young dolphin is 6 or 8 years old. Since offspring are vulnerable, the females with calves join and form groups where they help each other to feed and protect their offspring. If a young female gets pregnant, she can return to her natal pod to give birth and care for her calf along with her female relatives, forming a multigenerational group.

The males usually do not get close to these groups.

Juvenile pods.
When reaching a certain age, both males and females leave their breeding group and join with other young dolphins, but curiously, they go to the group of their mothers occasionally for a while and then return to their youth group.

Two male dolphins can stay together for 10, 15 or 20 consecutive years.

The members of these groups are engaged in socializing with others and establishing a preamble to mating. Genres, however, are not intimately related for extended periods of time and once a female becomes pregnant, she joins the nursery group.

Adult males.
The structure of the male pods is very complex and similar to a human male group, you will see why.

Often males are related to 2 or 3 individuals of the same gender and create partnerships for cooperation purposes. Two male dolphins can stay together for 10, 15 or 20 consecutive years. The smaller groups have the objective of cooperating to ensure the mating of the others with a specific female. The larger groups make alliances with other herds of males to defend themselves but also to compete. They continue moving from pod to pod throughout their lives.

Males are dominant in all groups, but there is no evidence of strong social bonds between them and females. An example of social interaction and their high intelligence is the regular playing activities they perform. Juvenile and adult dolphins often chase each other and toss items such as seaweed back and forth.

Most experts believe that the social relationships formed by dolphins are long lasting.

Dolphins often have close body contact with other dolphins through rubbing, petting, and even hitting each other.

COMMUNICATION, THE GROUND FOR SOCIALIZATION.

Dolphins communicate with their pods usually through whistles. Each dolphin has a unique whistle that identifies it with other members of its group. If an individual is in distress, it uses a particular sound that indicates help is needed, so the pod responds quickly.

Although it would be normal that dolphins socialize only with their kind, the interest of some species of dolphins to interact with humans is evident. In the wild, dolphins are extremely curious, and they will often engage in contact with people if a chance comes up. In captivity, dolphins are very attached to the people that usually interact with them, like trainers or researchers.