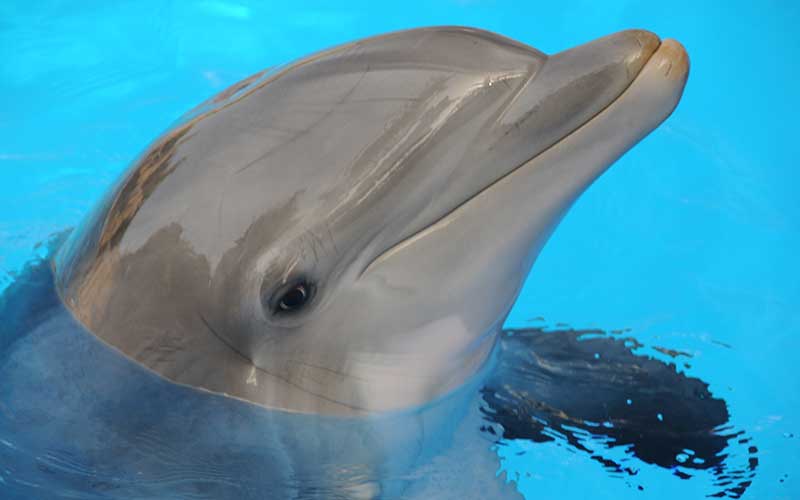 Do you think that playing, recognizing yourself in a mirror and detecting the place where the smell of a delicious food comes from are simple activities? Well, for humans are everyday and banal actions, but only a few species of the Animal Kingdom can also do this. The senses stimulate the actions and activities of a complex brain activity and with the capacity for consciousness (which is not the same as reasoning) endow a given species with a certain degree of intelligence.

Along with human beings, dolphins belong to a group of creatures considered to be intelligent. The intellect of these cetaceans is not superior to the human’s, although some scientists believe that the intelligence of dolphins is different and the comparison in human terms is not fair.

THE BRAIN AS THE CENTER.

Dolphins have larger brains than humans and a complex neocortex.

When it comes to comparing the brain sizes of living creatures, it is done assessing the ratio between brain size and body size. The dolphin case is exceptional. They have brains larger than those of humans and a highly complex neocortex ( the type of cerebral cortex in charge of processes associated with reasoning and consciousness).

The fact that dolphins have a larger brain than other mammals is still an issue. Some theories state that is the result of the need for sound detection and processing, and to a superior intelligence.

The ability to process external stimuli depends on the anatomy of the brain and the dolphin’s experiences, which are the interactions and perception of the world. To do this, dolphins have highly developed senses and high intelligence.

Like humans, dolphins are entirely dependent on their senses for survival in their environment, but the difference with Homo sapiens lies in a sixth sense useful for feeding.

Sight.
Most dolphin species have a very sharp vision in and out of the water thanks to the eyes that can move independently, and to the curvature of the eyeball. Their visual range is 180°, so they can see forward, backward and sideways, but they can not look up, and this explains why they are seen chasing prey swimming in a position with the back downward.

The retina of their eyes has rod cells and cones cells. This feature suggests that they cannot distinguish colors, but so far this has not been confirmed, and most think that they can only differentiate shades of gray.

However, not all dolphins species can see. River dolphins do not enjoy the same sense of their saltwater relatives and, either they have weak vision, or they are blind, as it is the case of the Indus dolphin (Platanista gangetica minor). This lack of vision is because the suspended sediments in the river waters that reduce the sunlight, therefore, the river dolphins do no need to look at their surroundings. However, they do have the other senses.

Smell.
This sense is not very developed. Dolphins lack olfactory nerves and lobes. Therefore this sense is inexistent or very limited.

Hearing.
Dolphins do not have external ears, but they have small holes on each side of the head, which conduct to the inner ear. They have 2 to 3 times more cells in the ear than humans, and thus they can detect low-frequency and high-frequency sound waves as well as the tone of sounds.

The lower jaw captures sound waves underwater. It might sound strange because it has no holes to listen to, but it drives the sounds into the ear through a cavity filled with fat. Their teeth also play an important role since they are a kind of antennas that receive the sounds.

+ River dolphins do not have the sense of sight like their saltwater relatives, and even may be blind.

Taste.
There is not much data about this sense, but it is present in dolphins because they show clear preferences for particular types of food. Their habit of testing the water functions as a sensor for the presence of objects or prey that are not in their mouth.

Bottlenose dolphins identify four basic flavors: sweet, salty, bitter and sour. The ability to taste goes beyond the preference of the food: it could be useful for the orientation, reproduction, and location of other dolphins.

Touch.
The skin of dolphins is very sensitive due to a large number of nerve endings they have below it, mostly around the snout, pectoral flippers, and genitals.

They are very susceptible to the water flowing through their body and use their sense of touch in social and sexual contexts.

Dolphins also have a highly developed sense of touch due to the nerve endings in their skin. The nerves seem to be more sensitive around the snout and the pectoral fins, but their entire body is very sensitive.

Echolocation or biosonar.
This sense works emitting high-frequency sounds (200,000 cycles per second) through a specialized organ called “the melon.” The sounds bounce back when they find an object, like prey, and return to the dolphin in as an echo. The teeth pick up the returning sound, and it is drawn to the auditory nerve and then to the brain through the lower jaw. The use of echolocation gives dolphins the possibility of knowing the shape, size, weight and density of the object and even to identify some species or dangers.

Dolphin senses are paramount to the overall survival of the dolphin. They use the information collected through them to interpret and to determine how to act or protect themselves.