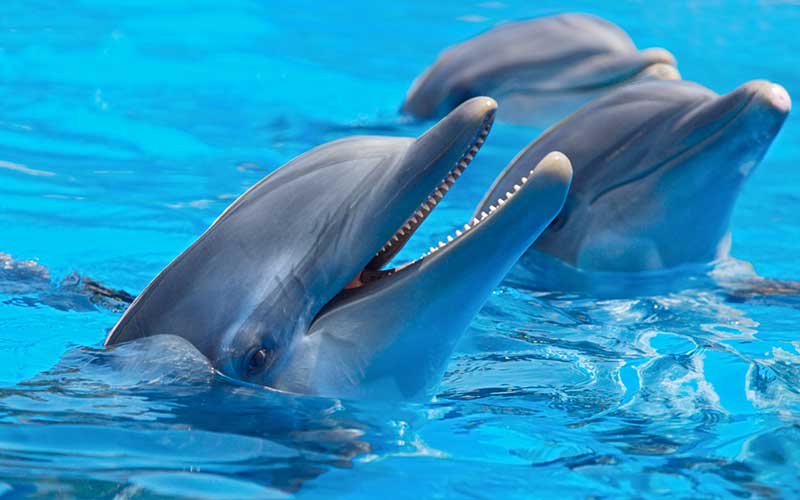 HOW CAN MAMMALS SURVIVE IN THE OCEAN?

Dolphins are mammals fully adapted to live in the water. For this, they developed several adaptations during their evolution.

The migration of dolphins to the aquatic environment was a process that lasted millions of years. Moving from the terrestrial to the aquatic habitat entailed a series of adaptations without which this would not have been possible.

Physiology is the science that studies the functions of living beings. In the case of dolphins, it is interesting to know how they perform their physical and chemical functions in their changing environments.

HOW DO DOLPHINS REGULATE THEIR TEMPERATURE?

Dolphins should maintain a constant body temperature of about 36°-37° Celsius degrees.

Dolphins need to keep a body temperature of about 36°-37° Celsius degrees. As they do not have a coat to protect from the cold temperatures of the water, they must regulate their internal temperature in other ways; this process known as thermoregulation is vital for their survival.

Dolphins perform body thermoregulation through a set of internal resources that evolution provided them. Initially, the fat in their body is a thick layer that insulates the inside from the cold water. This layer allows dolphins to retain their body heat. Secondly, their flippers do not contain fat, but instead, they have a lot of veins so that the heat of the blood that runs through the arteries transfers to the blood of the veins. This process is a heat exchange system.

In hot environments, dolphins increase blood flow to their limbs. The veins and capillaries expand, and this way excess heat can be released.

HOW DO THEY SWIM?

The fusiform and hydrodynamic body of dolphins is perfect for reducing water resistance when swimming, which allows them to save energy. Contrary to fish, these cetaceans swim by moving the tail from top to bottom and not from side to side. Their tail has a strong propulsive force, and the flippers are useful to direct their movements.

Typically they do not need to dive very deep, but they can do it for a few minutes to obtain food if needed. Dolphins that inhabit the cooler waters are better suited to dive deeper, as they have more body fat. Besides the time their need to resist down without breathing, the water temperature dramatically drops in places where the sunlight does not reach.

When dolphins dive, their heart rate slows down, and protein molecules take care of providing oxygen to the body tissues.

One of the most evident differences between cetaceans and fish is their swimming method. Fish swim by wiggling left and right, and if you watch crocodiles and snakes, you’ll see the same motion. However, as dolphins are mammals with a different skeletal structure, they make up and down strokes to swim.

Today you can still see some of the remnants of their terrestrial ancestors in the dolphin’s skeletal structure. For instance, they have forelimbs, which became flippers with shortened arm bones and no fingers. Hind limbs exist as vestigial skeletal remains. Most cetaceans, including dolphins, still have a pelvis typical of land animals.

HOW DO DOLPHINS BREATHE?

Dolphins, like other mammals, get the oxygen from the air instead of the water and thus use lungs instead of gills. A dolphin that cannot surface and breathe will drown; this is why dolphins caught in fishing nets die.

Like all mammals, dolphins have a pair of lungs that process the air that they breathe in through their blowhole. That’s why most Dolphins stay close to the surface of the ocean.

Unlike humans that do it instinctively, dolphins have to reach the surface to breathe consciously. When they do this, the blowhole opens to allow the air in and closes when they get back into the water.

The lungs process the air and take the oxygen from it releasing it into the bloodstream and when exhaling the lungs release the carbon dioxide from the blood into the environment.

How do dolphins breathe?
Blowhole.

HOW DO DOLPHINS SLEEP?

As mentioned above, dolphins breathe consciously. Therefore, their brain needs to give the order to reach the surface to get air continuously. As a consequence, they could not sleep until unconsciousness as humans do. Otherwise, they would drown and would be vulnerable to predators.

Dolphin blowhole does not expel a stream of water, it looks this way, but it is only water vapor that condenses in the air when they exhale.

The solution that evolution found for dolphins is that while resting, they have to keep a cerebral hemisphere active to consciously breathe and to stay alerted from dangers. However, the versatile adaptations of dolphins to changing environments is fantastic, because researchers found that captive dolphins apparently have a deeper sleep than dolphins in the wild since they do not react to minor external stimuli while sleeping.

Incidentally, there is a wrong belief that dolphins and other cetaceans expel a stream of water from their blowhole, but this is not the case. It is only water steam that condenses in the air when they exhale. 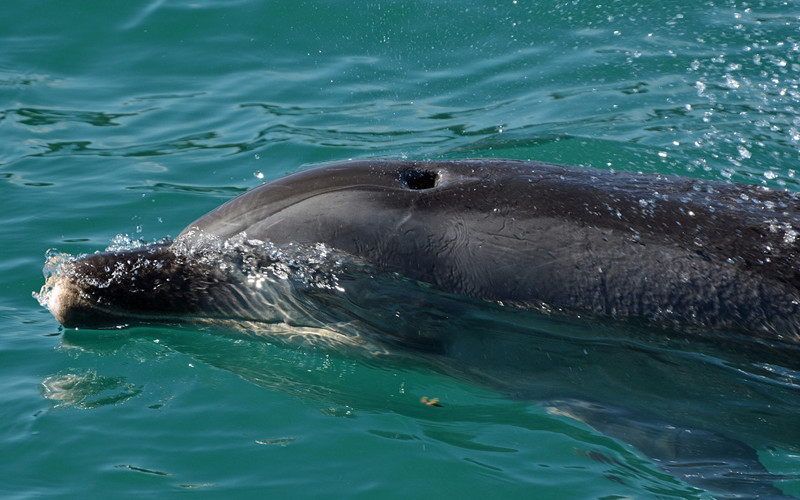 HOW DO DOLPHINS REPRODUCE?

The reproduction of dolphins is sexual, and the fertilization is internal. Both males and females have the reproductive organs concealed inside slits in their body. Mothers have the mammary glands also hidden inside slits.

The gestation period has a similar duration to that of humans and females give birth to live and developed offspring, which are fed with breast milk and cared for over a relatively extended period. The relationship between a mother and its offspring lasts forever.

WHAT SENSES DO DOLPHINS HAVE?

They have some of the traditional senses that we have: hearing, sight, taste, and touch, but evolution provided dolphins with an additional sense that only a few animals have: echolocation or biosonar.

Dolphins produce sounds that emit forward and interpret the echo that returns to them with the aim of discovering prey, navigating, communicating or detecting dangers.

Probably one of the most relevant differences between land mammals and dolphins is the way they vocalize. While most terrestrial animals have a larynx or a similar structure to vocalize using throat vibrations and exhaled air. Dolphins and other cetaceans use other organs to make high-pitched sounds either for echolocation or regular communication with others members of the pod.

Regarding the other senses, dolphins do not have external ears, but they have a good hearing capacity with an internal ear that receives sounds through the throat.

Also, Dolphins have a vision much better than one might expect of an animal that uses echolocation as its primary way of sensing the world. Despite this, dolphins can see little or no colors and have limited binocular vision like primates. Their eyes are small but even though they have a good sight with a reduced capability to distinguish colors.

They have an excellent sense of touch improved in some species with sensible hairs and frequently used for social purposes.

Dolphins do not have olfactory lobes. Therefore they lack the sense of smell.

Finally, their sense of taste is not especially good because they do not have a very developed taste buds, but they show some preferences to certain fish species which could be an indicator of taste, although this could be an intuitive behavior because some types of fish have better nutrients for them than others.

These organs and senses are the structures that help these cetaceans to keep in perfect harmony with its context.

Coates, Linda. How to Make a Dolphin: Anatomy, Physiology and Taxonomy (English Edition).