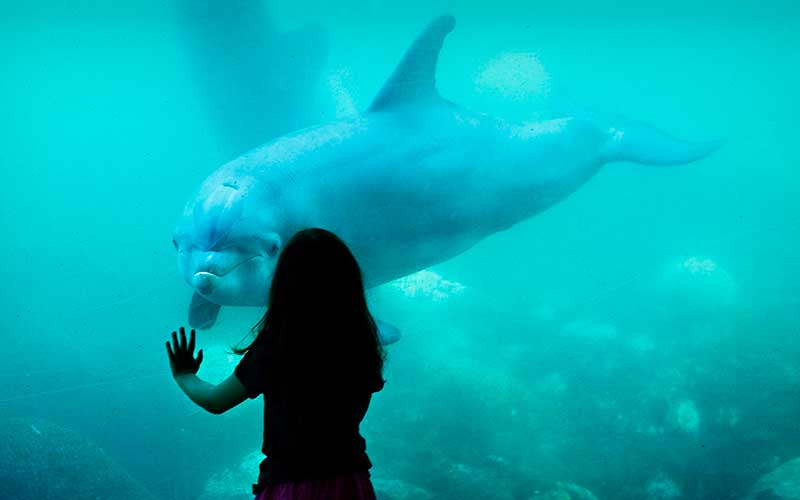 All the animal species in the world are an important part of the Earth’s ecosystem, and dolphins are no exception. However, some species of these cetaceans have a difficult time, full of dangers that have put many of them on the brink of extinction.

From an ethical point of view, all species deserve to survive in nature and have an optimal life without suffering; From a biological perspective, their disappearance causes irregularities in the food chain that affects other natural processes, even affecting us indirectly.

Their presence in the world is not appreciated as it should be. Dolphins may have an image of friendly and charming animals, but probably their existence is not believed necessary for the survival of other life forms. Would life on Earth be the same without them?

The truth is that dolphins are an inherent part of the cultural history of humanity. They have accompanied humans on their sea voyages for thousands of years, and such presence appears in many artistic expressions of both ancient and modern cultures. They are part of the tiny group of animals that can approach voluntarily to humans, with no intention of doing harm. They can even save human lives, as has been reported throughout history.

Dolphins are indicators of the health of the ocean biome as their presence or absence can give an idea of ​​the general state of these areas.

Dolphins play a significant role in the balance of the ecosystems. Its high position in the food chain allows them to feed on small prey that can be old or diseased. In these cases, dolphins “clean” the area and thus prevent the spread of diseases. Likewise, their non-existence in a zone can have consequences such as the appearance of pests as there are no species that feed on lower-level animals in the food chain. In this sense, dolphins are also indicators of the health of the ocean biome as their presence or absence can give an idea of ​​the general condition of an area.

What about their intelligence? Dolphins have given humans lots of knowledge about their lives that have supported the development of studies, devices, and programs applied to human life. Understanding their echolocation is useful in scientific and military programs, and their intelligence and complex communication skills are the subjects of scientific interest, and some envision the design of a form of communication between humans and dolphins. The possibilities are endless.

The Whale and Dolphin Conservation Society is one of those international, non-profit organizations that works to protect and save lives of whales, dolphins, and porpoises to offer them a great future. This group operates in association with the CMS (Convention on Migratory Species), an agency in charge of protecting terrestrial, airborne and marine migratory species, including dolphins.

The Convention on International Trade in Endangered Species of Wild Fauna and Flora (CITES) is one of the largest organizations in this area. It protects all odontocete cetaceans, including dolphins. Its Appendices I, II and III contain species in different degrees of protection, where the III includes the species with the highest level of risk. Many dolphins are in Appendix II, which includes animals that need to regulate their trade or soon will be in danger of extinction.

The International Whaling Commission, on its side, instructs its members to report dolphin catches for the production of reports to support research on these cetaceans.

Responsibility does not lie entirely with these organizations. Many countries also sponsor the welfare of these animals and have strategies to conserve them. In the United States, the 1972 Marine Mammal Protection Act is an agreement administered by the National Marine Fisheries Service (NMFS) which includes the illegality of harassment, feeding, appropriation, killing or any other harm to Marine mammals in US waters.

Asian freshwater dolphins are in a severe danger of extinction despite that the Authorities tried to counteract the problem. For example, India declared the dolphin its national animal in an attempt to emphasize the conservation of the Ganges River dolphin (Platanista gangetica gangetica). There, they created the Vikramshila Gangetic Dolphin Sanctuary. In China, the Hong Kong Dolphin Conservation Society is a non-governmental organization that performs various protection activities.

CAN ANYONE HELP WITH DOLPHIN CONSERVATION?

Anyone interested in the future of dolphins and the balance of the natural ecosystems can contribute to the preservation of dolphins, either directly or indirectly. The following conservation strategies are useful and easy to do if you want to help:

Anyone can contribute to the preservation of dolphins.

Reduce the use of plastic bags and other products. Once in the water, these objects become deadly weapons that can be ingested by many animals or injure them.

Use natural or biodegradable cleaning products that avoid water pollution in the habitat of dolphins.

Avoid going to Dolphinariums could help to reduce the capture of wild dolphins since some have unpleasant experiences when caught to end their life in captivity.

Do not feed wild dolphins. Food for humans is not healthy for dolphins and could change their eating behavior.

Work in organizations and conservation programs of dolphins, as much as possible.

Protect dolphins, and nature will thank you.

Dolphins are at risk mainly due to anthropogenic causes. In all the bodies of water where they reside, humans have contributed to contaminate them with plastic, chemicals, and oil. These forms of pollution can harm the dolphins internally, but they can also kill their food resources, so it becomes harder every day for dolphins to find enough to survive.

Additionally, commercial fishing is another significant danger to dolphins because they get caught in nets or other devices, besides further reducing food availability.

Humans and their water-related activities such as recreational activities or maritime traffic are extremely common in the areas where dolphins live. The risk of injury or death from being struck by boats and propellers is very likely.

In some regions, the intentional catch of dolphins for their meat and oil is also common. While only a small population of people consume them, there is a market for it, that result in many of them needlessly killed every single year. Some of the conservation efforts have involved putting pressure on the governments of those countries to ban such hunting.

Dolphins have very sensitive skin. Many debris and garbage in the water that humans put there can rip their skin and make them vulnerable to bacteria or infections. They are already prone to a variety of diseases and parasites, so this makes them more susceptible.

The noise that dolphins experience including naval sonar, explosions in the water, construction, and boats can all contribute to high levels of stress for dolphins.

There are some conservation efforts in place to preserve dolphins so that they can survive. However, some species like the Ganges River Dolphin are considered to be critically endangered or already extinct at this point.

The Marine Mammal Protection Act of 1972 and the Endangered Species Act of 1973 both offer dolphins some protection, but it isn’t enough.

In 1984, amendments were made to the Marine Mammal Protection Act so that there could be more protection for dolphins. Commercial tuna fishing is a huge risk for dolphins because they follow this fish, so the Department of Commerce banned imports of tuna from fishing fleet locations that didn’t have methods in place to reduce dolphin incidental kill rates that were comparable to those of the USA. However, by 1988 those dolphin deaths in other locations around the world were still four times higher than those in the USA.

Many environmental protection groups boycotted the purchase of tuna to help make a stand against it. The three principal companies that owned 70% of the market (Bumble Bee, Starkist, and Ralston) voluntarily offered a dolphin-safe only policy. They refused to buy the tuna from any entity that didn’t have safety practices in place to protect dolphins. Even though, bycatch is at is peak now.

The Dolphin Protection Consumer Information Act implemented in 1990, provided, further protection to dolphins regarding commercial tuna capture. The International Dolphin Conservation Act passed in 1992 was a five-year strategy to prohibit fleets from capture dolphins in nets.