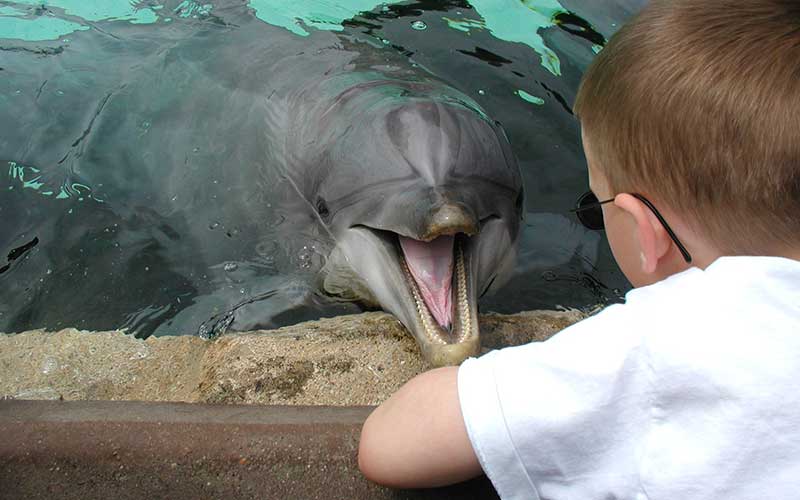 Communication, strictly meaning, involves the transmission and feedback of coded messages. However, the complexity of the communication processes seems to be exclusive to the human race.

Despite this, it is clear that dolphins have a sophisticated communication system which is the reason for their success against their predators. In short, dolphins survive because they communicate with each other and this allows them to organize and cooperate to increase their probabilities of survival.

HOW DO DOLPHINS COMMUNICATE?

Dolphins communicate through the emission and reception of sounds; Each dolphin develops its distinctive sound since the first years of life. All individuals produce a unique sound, which is different to the others so they can fully identify each other.

But, how do they produce these sounds? While dolphins are devoid of vocal cords, they emit sounds through their larynx, in the region of the nasal air sacs. These sounds do not mean that dolphins have a voice, but there is a tissue in the nasal area that has structures that project in the duct. When the air passes through that section, the tissue vibrates, and so the sound is produced.

Dolphins emit two types of vocal sounds: continuous tone and burst-pulsed sounds. The first type includes whistles, squeaks and some species of squeals. They are “frequency modulated sounds” because dolphins modify the tone of the sound, this is, it can rise and fall over time. The burst-pulsed sounds are recognized by the superposition of sound waves and refer to the “clicks,” produced successively at regular intervals.

Different emissions, different context. Dolphins can make sounds to interact socially: when they separate from their peers, when they are excited, when alarmed or just when they feel happy. The sound depends on the situation. Lost dolphins have been observed to produce whistles frantically in an attempt to call their companions, and individuals of some species emit pulsating sounds if they become excited or angry; Apparently, this is intended to make known their emotional state to other dolphins.

Sometimes bottlenose dolphins (Tursiops truncatus) produce a blast that invites other individuals to play, as a way of informing them that they are in a good mood and want to have fun with them. Very high pulsating sounds are used during aggressive encounters to call other dolphins, and others direct to the genital area of ​​females when males chase them and flee. Mothers often whistle their offspring for several days after birth.

Bottlenose dolphins distinguish different frequencies depending on what they want to communicate. Low-frequency sounds (0.25-50 kilohertz) are used to communicate in social situations while high frequencies serve in echolocation. Another case: during the aggressive persecutions of Indo-Pacific dolphins (Tursiops aduncus), they issue a kind of crunch that is called “pop” sound.

The human ear perceives successive clicks as a sound without interruption, but the truth is that they are short. We do not know much about the purpose of the different sound emissions and researchers are still working on sound-target identification. 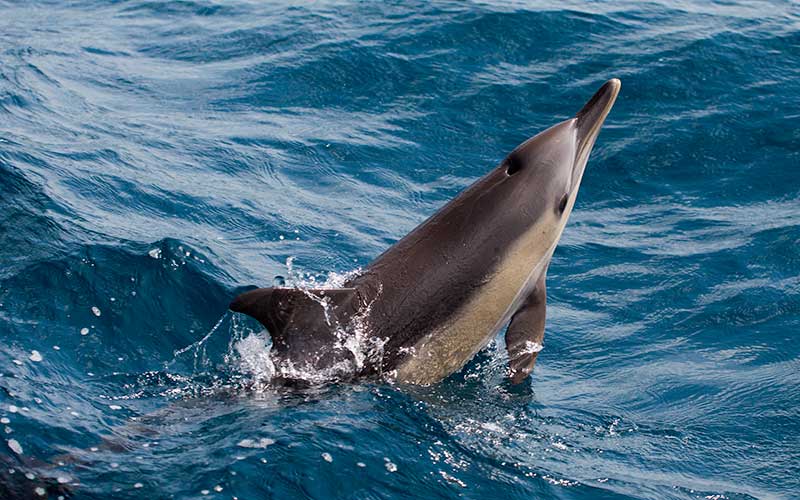 Although dolphins rely primarily on sounds to exchange information, they also communicate through touch and body language:

Identification of body coloring patterns.
Stains, stripes, and specks may indicate to other dolphins the health status or the age of their companions. For example, the skin of the Atlantic spotted dolphin (Stenella frontalis) develops spots when it begins to get old, and the scars in the skin of the Risso dolphin (Grampus griseus) informs others of their combat skills and experience.

Postures.
The body positions convey the idea of ​​the dolphin’s mood. An S-shaped posture demonstrates anger or aggression and is a way of saying “do not mess with me now.” If they are in a fight, they can expand their pectoral fins and extend their jaws to look bigger and more dangerous.

Touch.
The skin of these cetaceans is very sensitive to the touch. If they are in a good mood, then they can make physical contact with the flippers by pressing them against the flippers of another dolphin.

Tail Slapping.
It is a vertical blow of the tail against the water surface that often indicates aggressiveness, but it can also express the desire to leave the area where they are or ask for attention.

Flipper Slapping.
It probably has the same goals as the blows on the surface with the tail, but in this case, Dolphins hit their flippers against their body or the water surface.

Dolphins are almost constantly making one of two kinds of sounds: communicative or navigational. They produce these different sounds in a variety of ways.

Echolocation sounds are produced in their nasal passages just below their blowholes and are called clicks. Dolphins create these clicks sometimes in such rapid succession that they sound like buzzes or even quacks. These sounds are produced just behind the melon, an oily, slightly off-center lump on what you’d call the dolphin’s forehead, and the sound waves are focused forward through this organ.

Scientists are not entirely certain how the melon works, but it does seem to amplify, clarify and direct the dolphin’s echolocation sounds which allow dolphins to detect remarkably detailed information from the world around them. In one test, a dolphin found a marble-sized sphere at more than the length of a football field. Some scientists speculate that echolocation sounds may also be used to deliver an acoustic shock to small prey.

In the larynx, dolphins can produce high-pitched whistles and squeals which can rapidly change pitch. Whistles are single tones, with no vibrations that make them sound like buzzes. As far as scientists can tell, the whistles are a form of communication with other dolphins, and squeals are used to express alarm or sexual excitement.

Like some other animals, dolphins do have communication. But do they communicate linguistically? There’s some evidence for it. Dolphins tend to stay within their pods and may have trouble understanding “foreign” dolphins. In studies done on dolphins near Scotland, individuals appear to have names; or at least, other dolphins use specific and unique whistles only in the presence of certain other dolphins, as if calling them by name. Unlike any other animal besides humans, dolphins exhibit a tendency to take turns when vocalizing – making their communications sound like a conversation.

There have also been very basic linguistic studies of dolphin sound patterns. According to some studies, dolphin sounds follow the same basic patterns of all human-based language, from Morse code to Chinese.