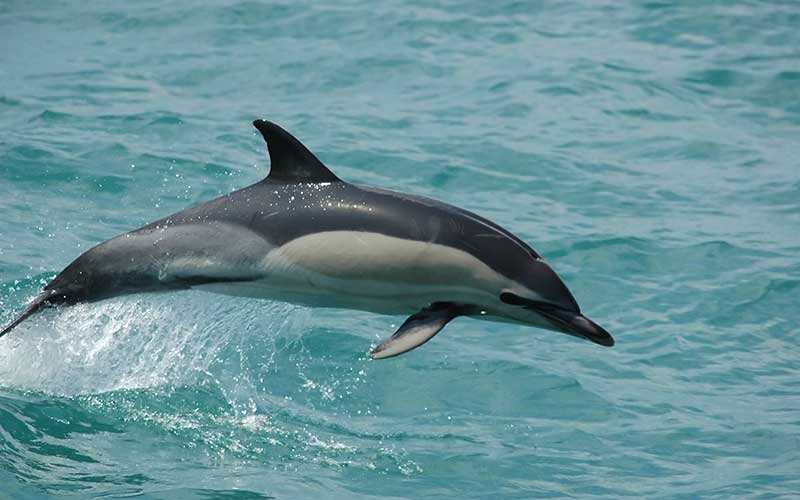 There are two species of dolphins that fall into the category of Common Dolphin. There are some experts too that believe a 3rd one should be added, but only time will tell if that turns out to be the case or not. More research has to be completed to make that determination, and it isn’t something that can be rushed. Right now, there is the Short-Beaked Common Dolphin and the Long-Beaked Common Dolphin that are recognized.

The one that may be added soon is the Arabian Common Dolphin which is only found in the Indian Ocean and the Red Sea. Still, the debate continues about if there is enough difference for them to be a separate subspecies or not.

If you have looked at various forms of literature and art from ancient Rome and Greece, then you already are familiar with the look of the Common Dolphin. Many people assume by the name that what they will see is what is often depicted in books and on TV. However, most of the time that image will actually be of the Bottlenose Dolphin.

The Short – Beaked Common Dolphin can weigh as much as 440 pounds and they can be up to 9 feet long. They have a very bright color to them which is very interesting. They often have patterns on them with dark gray that capes over them in a V shape under the dorsal fin on both sides of the body. Theirflank is a tan or yellow color.

long beaked common dolphinThe Long – Beaked Common Dolphin is very similar in overall appearance. The main difference of course is the length of the beak. This species can be from 6 to 8 ½ feet in length. They can weight from 160 pounds to 500 pounds. The males are going to be a bit larger than the females. They have a dorsal fin that is in the middle of the back. They too have the distinctively bright color patterns.

It can be tough to distinguish these two subspecies of Common Dolphins from each other. However, if you look at images of them side by side you can see how they have some variation that allow you to uniquely identify them. 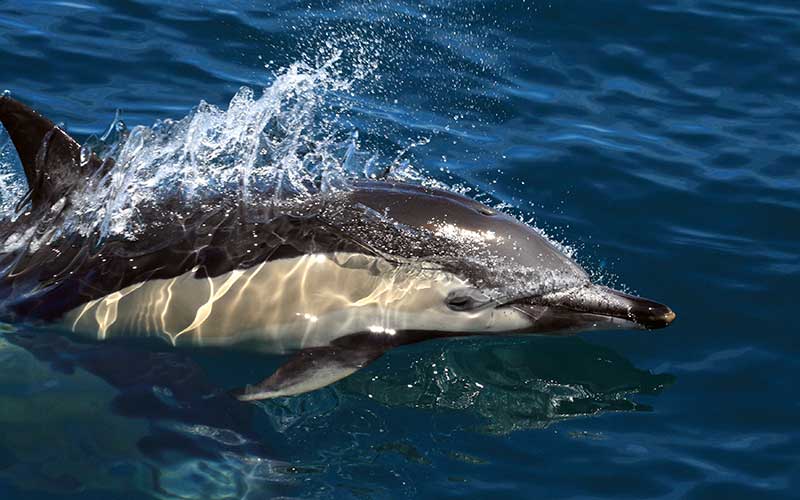 These dolphins don’t migrate like so many other species do. However, they will move around if necessary to find food and when there is unusually cold waters. They often do return to their home range though as soon as possible.

The Common Dolphin is very social, and they live in large groups called pods. The number in a pod can be several hundred or it can be in the thousands. The largest ones number over 10,000. They have a very complex hierarchy that keeps them orderly and they tend to create subgroups based on age and other factors.

This dolphin species has been seen taking part in a variety of different behaviors. They include somersaults, pitch poling, breaching, and bow riding. They are very active and they seem to be able to move through the water almost effortlessly. They are also playful so they spend time teasing each other.

Touch and echolocation are big parts of their social interactions with each other. They seem to thrive on the connections they have with each other. Vocalizations including whistling, whining, and clicking are very common. The dialogue though can be different based on the pod and that is a very interesting element of their overall behaviors.

The majority of the diet for the Common Dolphin comes from schools of fish. There can be quite a variety of species though for them to select from. What they will have access to depends on their location. Some of these dolphins are quite picky when it comes to which ones they will eat. They will resort to other types of fish though when those they enjoy the most are hard to come by. They will also consume squid and other cephalopods.

Feeding usually occurs at night and then they will be resting during the day. They have up to 57 pairs of teeth on both the upper and lower jaws that they can use to help them hold the prey but they don’t chew their food. What they do consume has to be small enough for them to swallow. They can consume about 5% of their body weight daily. 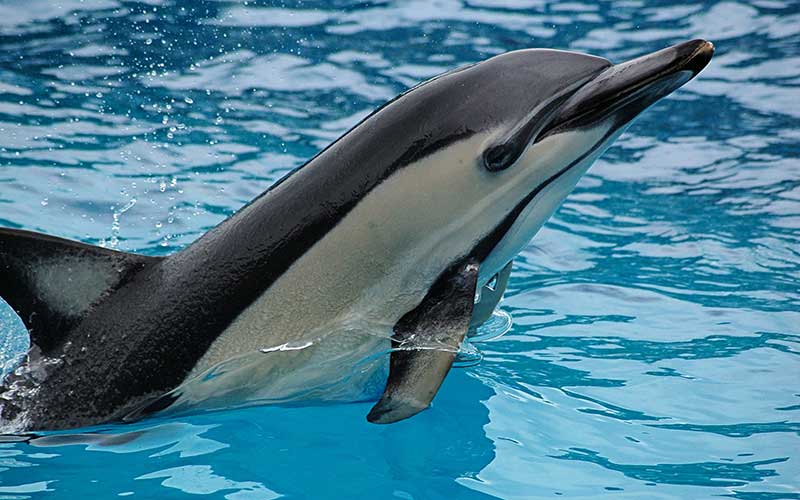 Females can be ready for mating from 2 to 7 years of age. For the males, it can range from 3 to 12 years old. It is believed that the length of the dolphins plays more of a role in when they are mature to mate than their age. Typically, The Common Dolphin will mate when it grows to a size of 6 ½ feet.

The common time for mating is from June to September. It takes from 10 to 11 months for the calf to be born. The young offspring can be from 2 ½ to 3 feet long at birth. They will drink milk from the body of the mother for several months. The females can give birth every 1 to 3 years.The average lifespan in the wild is 35 years.

There are quite a few risks at this time to the Common Dolphin, and many of them are the result of human efforts. One of them is the amount of pollution that continues to find its way into the water. This can include chemicals and plastic. They both have a huge impact on the negative health of these dolphins. Efforts to help reduce pollution continue but still have a long way to go in order to be a success.

Along the coast of Peru, issues with them being heavily hunted for food and to use as bait for sharks is an issue. Even with pressure on the government there, the problem continues and there is too much money being made by those involved to get them to stop the process on their own. Only when there are serious fines and jail time for such activities will there be an leverage.

Commercial fishing efforts have resulted in thousands of these dolphins being injured or killed. In the US there are protective efforts that limit fishing areas and the types of equipment that can be used. Right now the Short-Beaked Common Dolphin is considered to be least concern but that could change if conservation doesn’t continue. For the Long –Beaked Common Dolphin, there isn’t sufficient data to be used to know their numbers in the wild. However, it is believed without such help then they too will have a hard time surviving.

Some of the conservation efforts that involve helping those that have been injured have been hard to complete. The Common Dolphin is stated to be one that is very difficult to keep healthy and happy in captivity.