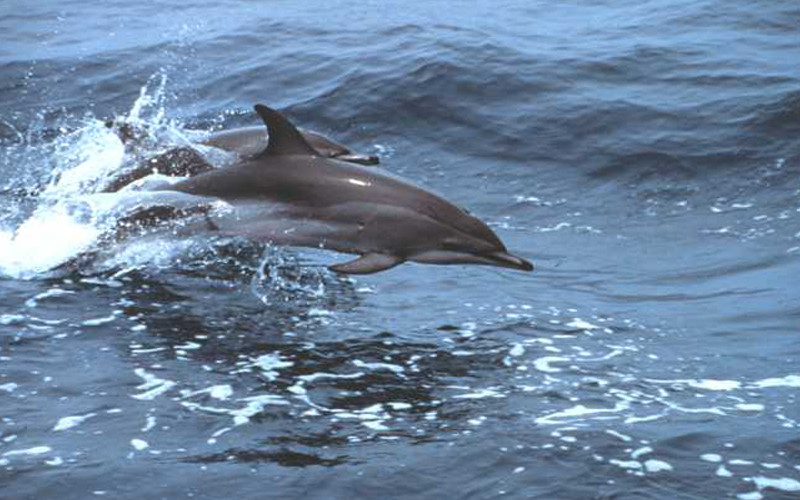 This species is also known as short-snouted spinner dolphin. It is the smallest dolphin of the genus Stenella and one of the most recent species to be recognized.

Until 1981, it had a different classification as a subspecies of the Spinner dolphin (Stenella longirostris), but recent genetic studies make it possible to restructure the taxonomy of this dolphin.

The physical appearance of the Clymene dolphin is very similar to that of the spinner dolphin but smaller.

Morphology.
It has a very robust, small, fusiform and hydrodynamic body with a short snout and a rounded melon separated by a fold from the beak. Its dorsal fin is in the middle of the dorsum.

Weight and size.
The males reach a size larger than females. An adult individual measures about 2 meters in length and the average weight oscillates between 75 and 80 kilograms.

Skin Coloration.
Its coloring pattern features three colors on the skin. Dark gray in the dorsal area, white in the ventral zone of the dolphin, and light gray on the sides. With parts blending between these colors but others with a sharp change in the color. Both pectoral flippers and the caudal fin are dark gray, and from the eyes to the flippers, it has a thin black strip.

Distinctive characteristics.
The clearest difference between Stenella clymene and the spinner dolphin (Stenella longirostris) is a dark spot located above the beak that resembles a mustache.

The distribution of the clymene dolphin is very broad and includes the tropical, subtropical, warm and temperate waters of the Atlantic Ocean. It extends from the west of the African continent to North America. Its boundaries in the northwest correspond to the territory of New Jersey; In the United States, and the northeast to Morocco while in the southeast to Angola, in Africa, and in the southwest, they reach the coasts of Brazil. The Caribbean and the Gulf of Mexico are also homes of the clymene dolphin.

It usually dwells in salty waters with depths of 44-5,000 meters. It is not an animal that approaches the coasts, and reports indicate only one sighting in waters with a depth lower than 44 meters. However, they usually roam in waters with 100 meters in depth.

This species feeds on various species of fish, squid, and octopus. From the remains found in the stomach of a stranded dolphin is believed that they feed more frequently at night in waters close to the surface, since the food in the interior belonged to mesopelagic species.

Most of the diet of the Clymene dolphin includes lanternfish and others of the families Myctophidae, Argentinidae, and Bregmacerotidae. Apparently, this dolphin waits for its prey to ascend vertically during the night to follow its trail and then feed on them. In the Gulf of Mexico, feeding is usually during the day with the help of several other dolphins. The group detects a fish school and coordinates to chase, stun and eat them.

It worth mention that their conical-shaped teeth do not serve to tear the flesh, but only to hold the prey.

The Clymene dolphin gathers in groups, but they are smaller than those of the spinner dolphins. Their pods are made up of 60 to 80 members although occasionally they form temporary groups with a few hundred individuals. Whatever the number, they appear to be divided by age and gender.

These dolphins associate with other species of dolphins being Stenella longirostris its most frequent companion besides the individuals of the same species. Other associations are with short-beaked common dolphins (Delphinus delphis) in West Africa. When they swim along with other species they do not mix with them, they stay next to their pod.

It can jump out of the water, spin in the air on its axis and do other stunts. However, their jumps are not as tall or complex as those of other species of dolphins. It also often rides bow waves of the boats and peers around them. On the other hand, possible migratory routes are unknown.

Knowledge about the breeding habits of this dolphin is almost unknown, and only some data comes from its closest relative, the spinner dolphin.

Researchers believe that it reaches sexual maturity as soon as it measures 1.8 meters in length and females give birth, after a gestation period of about 11 months, to one single offspring of about 10 kilos of weight and 0.8-1.2 meters of length, probably every two years.

The longevity of Stenella clymene is also unknown, but there is a known specimen of 16 years, so the species should surpass that age.

The Red List of the International Union for Conservation of Nature does not have enough data to assess its conservation status. Like most animals, they are the objects of anthropogenic threats that endanger their survival on Earth, but the administration of the preservation efforts is still unclear given the little information they have about it.

– Bycatch.
In West African and Venezuelan waters, it is captured by gillnets and trawls; this happens especially off African coasts although catches are still not significant.

– Intentional catch.
In the Lesser Antilles, the Gulf of Guinea and the coasts of West Africa some dolphins are caught for human consumption or use as bait.

– Habitat Pollution.
There are no records on the level of pollutants in their habitat, but they constitute a potential threat.

There are not strategies yet for the conservation of this dolphin, although it is in CITES Appendix II (Convention on International Trade in Endangered Species of Wild Fauna and Flora), which indicates that trading of this species needs regulation.