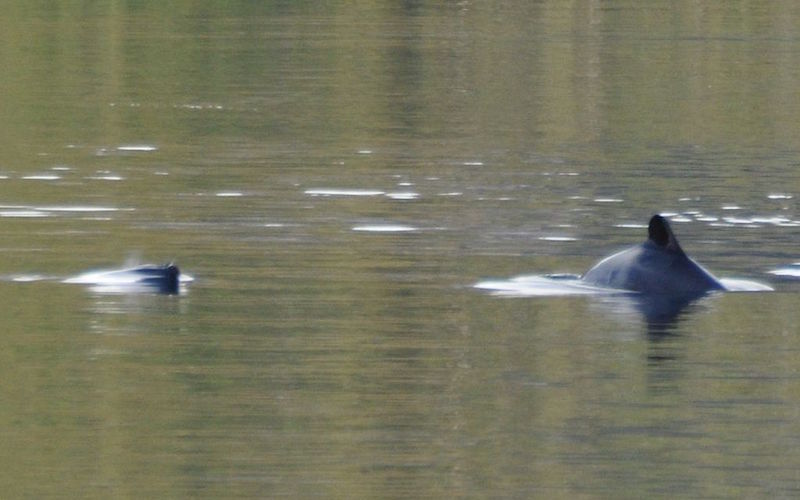 Photo by Frank Holden. This file is licensed under the Creative Commons Attribution-Share Alike 3.0 Unported license.

These little-known dolphins were called “black dolphins” because the few specimens sighted seemed to have an entirely black skin because, either they were found dead and their skin had completely blackened, or they were seen from far, looking darker than they are. In Chile, they also call this species “Tonina.”

HOW DO THEY LOOK?
PHYSICAL DESCRIPTION.

Morphology.
The torpedo-shaped body of the Chilean dolphin is sturdy but small, which gives it an unusual appearance. It has a narrow conical head, a little forehead, not rounded and therefore tilted down. It lacks “snout” since that part is quite short. It has small eyes located right next to end of the line of the mouth, which is long and gives it an appearance of a permanent smile.

Its dorsal fin is small, rounded and triangle-shaped. The flippers are small, triangular and also have rounded tips. The tail has a median notch.

Weight and size.
The adults have an approximate length of 1.65-1.7 meters and a weight of approximately 60 kilograms. The females are slightly larger than males.

Coloring.
This dolphin has a predominantly gray color. The dorsal area, the tail, the flippers, and the dorsal fin have the same gray color but darker than the rest of the body, while the head and the sides are lighter than the other parts. The color in the area of ​​the melon is visibly faded, and the belly is white from the neck until near the genital slits where the color is interrupted by some dark spots. A black stripe starts from the blowhole to the eyes and from these to the dorsal fin. Around the blowhole, the skin is light gray.

Distinctive marks.
The roundness of their dorsal fin is the primary characteristic to differentiate the Chilean dolphin from other species that look similar to it, like the Burmeister’s porpoise (Phocoena spinipinnis).

The species is endemic to the coasts of Chile in South America. Its distribution ranges from latitude 33° south to 55° south, from Valparaiso to Tierra del Fuego, the Strait of Magellan and Cape Horn.

Its habitats are cold and shallow coastal waters. This dolphin dwells in bays, fjords, canals, estuaries and even rivers, but emphasizing that it is only present in Chile.

WHAT DO THEY EAT? FEEDING.

Cephalorhynchus eutropia maintains a carnivorous diet based on fish, cephalopods, and crustaceans, as most species of dolphins. Strangely some algae have been found in their stomachs. Their prey is regularly small since they are not very large.

It is an opportunistic hunter that feeds mainly on this prey:

There is not much information about the behavior of this dolphin as it seems to be very shy and difficult to spot and approach. The pods observed are composed of 2 to 15 individuals and very rarely of 20 to 50 dolphins. In other words, it is a cetacean that, while it is sociable, is not socially structured like other highly gregarious species. Interestingly, the southernmost individuals are shyer than the northmost as they avoid boats.

It stays in a small area within ​​its distribution range. Previously to hunt its food swim along with its peers in zig-zag or in circles to harass their prey. It is common that it associates with other animals, especially the Peale’s dolphin (Lagenorhynchus australis) and with some species of seabirds.

HOW DO THEY REPRODUCE? REPRODUCTION.

Some data related to their reproductive habits is not confirmed, or it is still unknown. However, this dolphin reaches sexual maturity when it is between five and nine years old.

Mating may occur in early winter and, given the sightings of dolphins calves, the offspring are likely to be born between October and April and stay with their mother for an extended period.

The Chilean dolphin has a “Near Threatened” status according to the Red List of the International Union for the Conservation of Nature (IUCN). The number of individuals living today is unknown, but estimations concluded that there are fewer than 10,000 and their populations are declining.

They are threatened by:

– Direct hunting, sometimes with harpoons, to use their meat as bait for crabs or human consumption.

– Bycatch with gillnets and purse seines. From dead dolphins, they can obtain oil and meat.

– Farming of salmon and seafood, which reduce the habitat of this dolphin as these facilities use coastal areas.

– Traffic of boats that disturb these dolphins and modify their behavior.