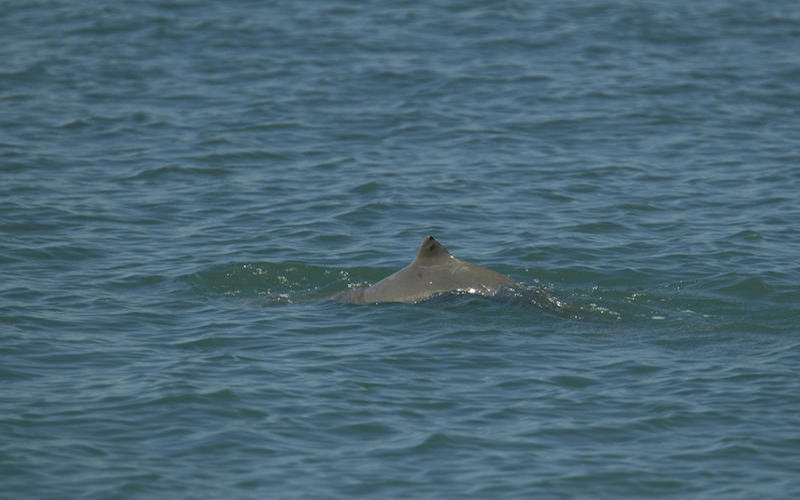 Photo by Mononykus. This file is made available under the Creative Commons CC0 1.0 Universal Public Domain Dedication.

Until the beginning of this century, the Australian snubfin dolphin did not exist. Of course, it did not suddenly appear, but it was considered a subspecies of the Irrawaddy dolphin (Orcaella brevirostris) until 2005 when scientists decided to separate both species acknowledging that the skull, the pectoral flippers and the coloration of Orcaella Heinsohni are different from those of the Irrawaddy species.

The word heinsohni included in its scientific name comes from the name of George Heinsohn, an Australian biologist involved in the discovery of the species. In 2005 the Australian snubfin dolphin was initially described.

HOW DOES IT LOOKS? PHYSICAL DESCRIPTION.

Morphology.
The Australian snubfin dolphin has a short and sturdy body which still has a fusiform shape. It has a round melon in the same way as the head, which is quite flexible. The “snout” is absent, and the line of the mouth extends straight. It has broad and rounded flippers with the shape of a spatula. This dolphin has a small dorsal fin which is curved and located in the back part of its body.

Weight and size.
The length of adults is between 2.1 and 2.3 meters, but males tend to be larger than the opposite sex. Their weight ranges between 114-133 kilograms.

Coloration.
It has three colors. The lower part of the body is whitish, and the dorsal region is blue-gray. The sides can be light gray or brownish gray.

Distinctive signs.
This dolphin lacks a dorsal groove, that is, a canal between the snout and the dorsal fin. Also, this fin is bigger than in the Irrawaddy dolphins.

WHERE DOES IT LIVE? DISTRIBUTION AND HABITAT.

The Australian snubfin dolphin is native to Australian waters and is not found naturally in any other part of the world except the Daru Island in Papua New Guinea. Its distribution includes the coastal waters around the Sahul Platform in northern and eastern Australia and to the coasts of Papua New Guinea. In the south, its limit is the region of Gladstone in Queensland (Australia).

It inhabits deep areas of open seas and the coasts in tropical or subtropical climates. It dwells about 23 kilometers off the coast, and in waters up to 30 meters deep commonly in reef areas, mangrove systems, and estuaries.

WHAT DO THEY EAT? FEEDING.

The Australian snubfin dolphin is an opportunistic predator which has a carnivorous diet. It consumes a wide diversity of fish, crustaceans, and cephalopods that are close to its habitat; This dolphin usually looks for food in mangroves, estuaries and coral reefs, mostly in shallow waters.

Some common preys are:

Surprisingly, it sometimes spouts jets of water when it is feeding, possibly to disrupt or disorient its prey.

The Australian snubfin dolphin has a timid behavior, and if something scares it, it submerges for a long time. These dolphins swim in groups of 5 to 14 individuals, and they are often seen looking for food in pods. Occasionally, the members of a pod jump or flap their flippers making a lot of noise, and splashing.

Sometimes, they interact with dugongs and Chinese white dolphins (Sousa chinensis), but with the latter, the relationship can become dangerous because Sousa chinensis can demonstrate aggressive sexual behavior and chase this small cetacean.

The range of habitat of the Orcaella Heinsohni seems to be extended and does not remain for a long time in the same place although if it moves away, it returns periodically.

HOW DO THEY REPRODUCE? REPRODUCTION.

Surprisingly, the Australian snubfin dolphin is monogamous! It seems to be the case of this cetacean, according to the stable and close relationship between partners. On the other hand, the age for reaching sexual maturity is still unknown.

The gestation period lasts about 14 months, after which the mother delivers only one calf weighing 10-12 kilograms. Their close social ties make scientists assume that caring the offspring is the task of several individuals in the pod. The mothers wean their calves at approximately two years of age.

The Red List of the International Union for the Conservation of Nature (IUCN) has classified the species as “Near Threatened.” Its main threats are:

Bycatch in gillnets for fishing salmon and barramundi (Lates calcarifer).

Contamination and degradation of their habitat.

Competing for prey targeted by the fishing industry.

This species is in Appendix I of CITES (Convention on International Trade in Endangered Species of Wild Flora and Fauna) listed as one of the species in great danger, the reason why the same organization, CITES prohibits its international trade.