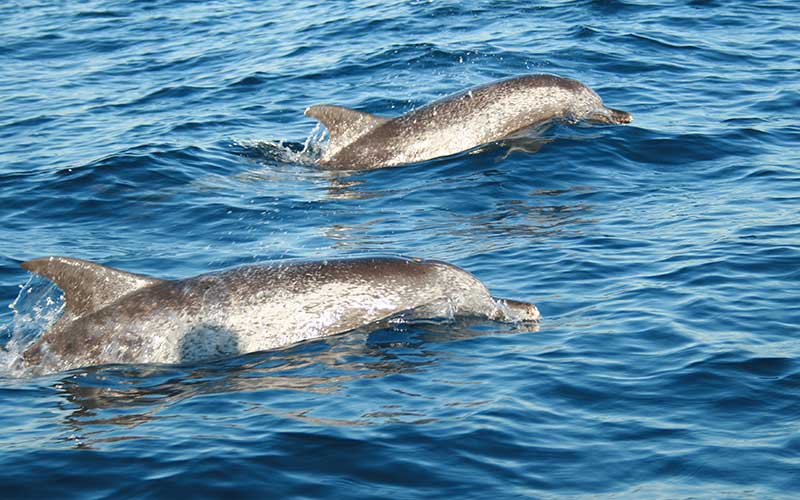 The Atlantic spotted dolphin is very long, with a size of about 7 ½ feet when fully mature. They can weigh from 240 to 360 with the males being much larger than the females. They develop unique spots all over their bodies as they get older. Young ones don’t have any spots and those that are mature may only have a handful. It is for this reason that the Atlantic spotted dolphin is often misidentified.

The Atlantic spotted dolphin is only found in the ocean. They are known to live in a variety of locations including the oceans around the United States, Africa, Europe, the Bahamas, and the Gulf of Mexico. They have significantly increased in numbers in the Bahamas. There are now hundreds of them when only a couple of decades there were less than 100 there. It is estimated that there are more than 100,000 Atlantic spotted dolphins out there.

Some of them that live along the Gulf of Mexico do migrate annually. Others tend to move long distances each day but not out of a need to follow a migration pattern.

They are excellent when it comes to communication. They use a variety of loud clicks and whistles to talk with each other. They form groups of about 50 and they are also known to move around with other species of dolphins without any conflicts among them. There is a hierarchy among these dolphins that depends upon many factors including their size, age, and gender.

They are extremely protective of their young and will help each other to care for them. They also tend to do their best to protect the pregnant females from enemies including sharks.

Their main food sources include octopus and various types of small fish. Most of the time they will fish at night. They also tend to hunt in groups as they have a tactic that allows them to get their prey into a big circle. Then they are able to come at these schools of fish from all angles.

There isn’t too much known about the reproductive habits of these dolphins. It is estimated that it takes 11 months from mating to birth. They are born without any spots but about one year of age they begin to develop. It is along this same period of time that the mothers will stop offering milk to them.

One of the biggest threats to the Atlantic spotted dolphin is the amount of pollution that is found in their natural environment. Many types of efforts have been initiated to help clean up these bodies of water. At the same time educating the public about not polluting has also helped to reduce it. Still, there is plenty more than has to be done in order to resolve the problem.

This particular species of dolphin is very timid. They have been known to come right up to humans that are visiting the areas of the Bahamas. This has become one of the main tourist attractions in that area.

Many of them are killed annually due to illegal hunting by fisherman. They want to reduce the number of them so they can produce more product in their fishing nets. Others are accidentally captured in those nets so they may drown or become severely injured.