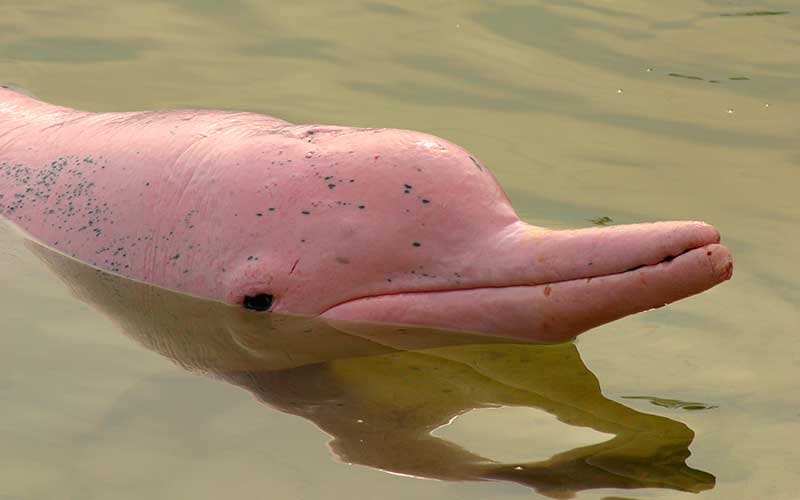 The Chinese white dolphin is a variety of the Indo-Pacific Humpbacked Dolphin, although some consider it a subspecies of the latter. It is a species of dolphin characterized by the pink color of the skin that some individuals may have. The first time it was seen dates back to the seventeenth century.

Two types of the Indo-Pacific Humpbacked Dolphin are known (Sousa chinensis and Sousa plumbea), although the taxonomy of Sousa chinensis is not yet clear as some scientists consider it a variety but others a subspecies. If the latter, its scientific name is Sousa chinensis chinensis.

The physical characteristics of the individuals of this species vary slightly according to the geographic region in which they live. For example, male specimens from the coasts of some areas have sexual dimorphism that other populations do not have.

Morphology.
It has a hydrodynamic body with a long, slender beak and a dorsal fin with a fat hump. Dolphins inhabiting eastern waters have a short dorsal fin whose broad base descends gradually over the dorsum. In contrast, individuals from western territories have a shorter and curved dorsal fin. The hump represents between 5 and 15 percent of its total length.

Size and weight.
It is a small dolphin; its length is between 2 and 2.8 meters. Its weight is between 150 and 200 kilograms.

Skin Coloration.
Perhaps, if it were not for the genetics, the Indo-Pacific Humpbacked Dolphin could not be recognized because of the color variability depending on the geographic region it inhabits. The adult specimens of the Chinese coasts have a pinkish appearance thanks to the blood vessels underneath, not because the skin has that color. In contrast, young individuals are gray.

Distinctive characteristics.
The main distinctive feature of the Chinese white dolphin is the hump on the dorsal fin and the pink color that many specimens present on the skin.

It is distributed only in waters of the Indian and Pacific Ocean, from northern Australia to eastern China as well as in the Indo-Malayan archipelago, the Bay of Bengal and the Gulf of Thailand. The plumbea type is found on the coasts of the Indian Ocean while the chinensis is mainly in the Pacific.

They prefer to inhabit warm and temperate waters with temperatures above 15° C and an average depth of 20 meters. They live on or near open coasts, bays, estuaries, mangroves, sandbanks, reefs, coastal lagoons, and river mouths. 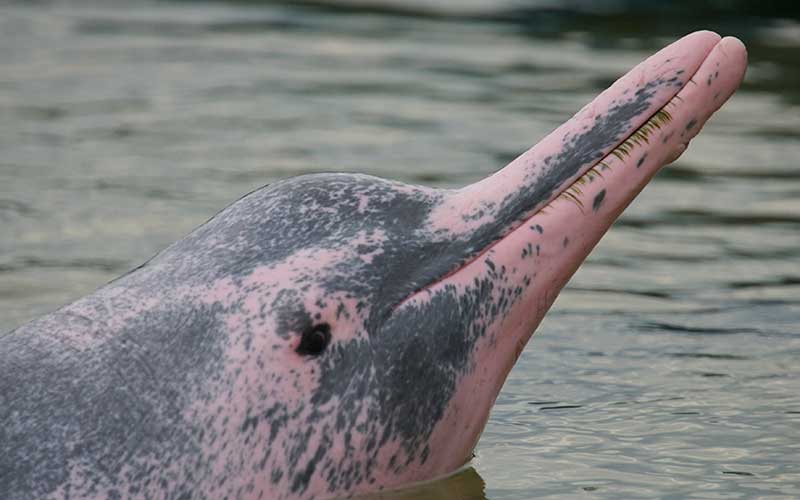 This dolphin prefers coastal fishes and those who live in reefs, littorals, and estuaries. Their prey includes cephalopods and crustaceans on few occasions.

It searches for opportunistic food in shallow waters, near the bottom of the ocean. If the tide is high, it ventures to areas with abundant food. In several areas of Australia, it has been seen following boats that catch fish and shrimp, to feed on discarded animals.

The reproduction season is during the months of spring and summer although it can extend until the autumn. There is little information about the reproductive habits of this dolphin and much less about its courtship methods. Studies and observations indicate that this species has as its primary reproductive strategy searching for a partner to mate.

After a gestation period of ten to twelve months, the female gives birth to a single offspring measuring 1 meter in length that is the object of dedicated maternal care even after weaning, which occurs when the calf is about two years old. However, oddly, the maternal care does not take place in individuals living on the coasts of South Africa (Plumbea type) and Hong Kong.

The Chinese white dolphin shows a behavior slightly less social than other species because it has been seen several times swimming alone. This does not mean that they do not form pods, but these usually have less than ten members and occasionally equal to or larger than 25 individuals. In the same way, the relationships between members are not close except fo those of mothers with their offspring.

This species can stay more than 4 minutes underwater without surfacing. Sometimes it jumps out of the water and hits the surface with its flippers, but do not perform jumps and stunts frequently. These dolphins usually avoid boats unless they are fishing boats. In such cases, they can be seen next to other species of dolphins and even other animals like whales and gulls.

It communicates by whistles and squeals, and to a lesser extent by clicks. On the other hand, it is considered a migratory animal that travels more than 120 kilometers away from home. This occurs mainly in summer in regions close to the African continent (Plumbea type)

Sharks are the only known predators of this dolphin, although some think that they are also victims of killer whales (Orcinus orca), there are still no reliable reports on this fact.

Its main threats are related to anthropogenic activities that also endanger the lives of other dolphins. They are:

– The intentional catch for their meat and oil.

– The decrease in the number of fish they feed on and fragmentation of the food chain.

Because of the above, populations have declined drastically. It has a conservation status as “Near Threatened” on the Red List of the International Union for the Conservation of Nature.